The Indus must be saved 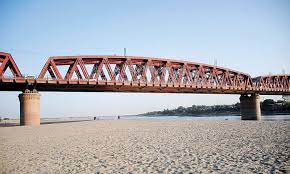 The Indus river known for its massive water flow has now made people worried. Continuous shortage in the Indus river has caused an alarming situation for Sindh. As lands are being left dry. Areas like Thatta, Badin and Sajawal are the last areas that fall under the Indus Delta. For years, these areas took huge amounts of water from the Indus delta and fertilized their land.

These areas are considered as the highest water taking districts. But when coming to the Human development index, these districts also fall in the last category. Majority of the population of those districts are farmers, fishermen, and shepherds. For a long time, the Kotri barrage faced a shortage in its flow, due to which daily life of people belonging to these areas was affected. In the majority of schools in Sindh, there is shortage of clean drinking water. And in some schools, if water is available but that is not drinkable.

According to a report of WHO, in 2015 people had better resources of drinking water as compared to 2022. But today, 1.5 billion people are deprived of clean drinking water. And that polluted water has become the cause of death for millions of people. According to the health experts, different and dangerous diseases are emerging from the polluted water such as hepatitis A, typhoid, polio, daria and so on.

Water is an important ingredient for living. Still Pakistan has not tackled the water crisis. There are many factors which have resulted in the water crisis in Pakistan. Such as urbanization, unstructured systems of irrigation and climate change. If this crisis is not tackled, people will have to face adverse problems beyond one’s thinking.

Today, Pakistan is considered in the category of water-short countries because availability of water per person is less than 1000 cusecs annually. If it goes down to 500 cusecs per annum, Pakistan will fall under those countries where merely water is available. In Sindh, most districts are consuming the sewage-contaminated water according to a report of the Supreme Court-mandated water commission.

Eighty big cities of Pakistan are deprived of clean water. Most people in those big cities are purchasing the water tankers. In that situation the question arises that if water is not available, how are these tanker mafias getting water? Although the government tried to take action against the tanker mafias, still they have influence and have not been eradicated.

Sindh, despite having the Indus river, is facing a water crisis. According to the Water Accord signed in 1991, an agreement was formed between the provinces of Pakistan over the water division. According to that agreement, Sindh would take 42 percent of water from the Indus river and at that time Sindh had 30 million of population. Now as per the figures of 2017 census, Sindh’s population has doubled. Still there is no review on distribution of water according to the current population and urbanization.

Pakistan is an agricultural country and much of its water is used for this purpose. Pakistan’s, particularly Sindh’s irrigation system, has been worse for 30 years. There is a need to make it better and effective in dry cities of Sindh.

lAST year, Pakistan Council of research and Water resources stated that they collected the samples of water from 14 districts of Sindh which showed the water was not drinkable. They also mentioned that water available in Karachi was also not clean and it was dangerous to health.

Apart from this, water used in hospitals is polluted and dangerous to health. Due to the consumption of polluted water, diseases are increasing. And every year many people die because of it. Shortage of water, and polluted water when available, has made people worried. In many cities, and potable water pipelines have been linked to sewage pipelines. In Pakistan, two big sweet water rivers meet at Sindh, Keenjhar, Halaji.

Despite this, low water flow in the Indus River has affected the areas on a large scale. As compared to other provinces of Pakistan, Sindh must get the due share of water in order to maintain the water flow in the Indus River. There is a need to work on ground level. It needs an hour to form a master plan for providing water for agriculture purposes and as well for drinking water in every district. Karachi is the most populated city and still there is no system of providing clean water. People have to purchase the water which is also not safe and dangerous to health.