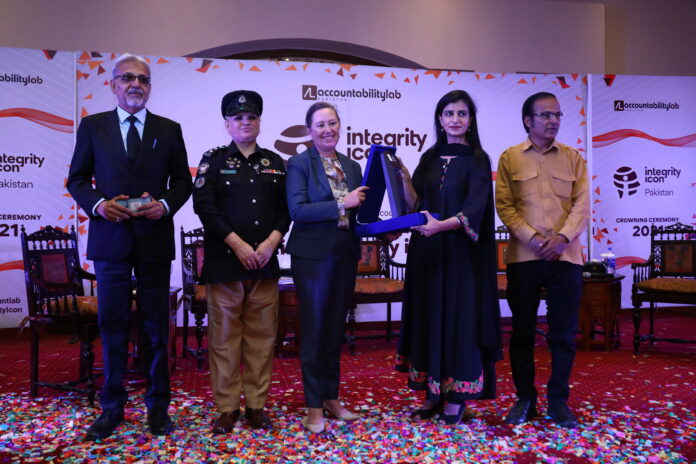 Speaking to the Accountability Lab, Chairman Board of Accountability Lab Pakistan (ALP), Ali Imran said that “Accountability and transparency are inevitable for the democratic governance, leading to the wise use of resources and benefiting everyone fairly. We must recognize and appreciate all those who are contributing for the positive change in Pakistan.

The Integrity Icon is an effort to name and fame such individuals in the public sector who are playing their role in service delivery, practicing core values of integrity and empathy. The ALP Board is thankful to government institutions and international partners for their support to this initiative.

While addressing the ceremony, one of AL’s former integrity icons, a civil educator and human rights advocate Mr. Zafarullah Khan remarked about integrity as “Integrity is an integral part of personality especially when you are interested to serve the people and I often say that duty is beauty and this initiative is to appreciate that beauty”.

He further says that “What else could be the greatest satisfaction when you are responsible to serve the citizen and citizens feel satisfied that you are always there to bring some kind of hope, some kind of relief, some kind of justice some kind of equality into their lives”.

The Icons have become well known for their efforts in their service towards citizens, pushing back against corruption and advocating for better governance in their provinces. Musvi, during his posting in Sukkur, devised rules to prevent the misuse of the school’s procurement committee from aprroval for personal purchasing.

Integrity Icon is an annual event to benchmark the values of accountable leadership, transparency and integrity in Pakistan’s civil service. The campaign recognizes and celebrates government officials from across the country for their integrity and honesty. Integrity Icon is currently in its sixth consecutive year in Pakistan and received more than 100 nominations which were screened and vetted by a jury comprising credible professionals from the civil services, academia and civil society of Pakistan. The Icons’ dedication to serving citizens and carrying out their duties honestly earned them the respect of their colleagues, superiors and most importantly, of Pakistani citizens.

“During this year’s campaign, we saw incredible energy from Pakistani citizens who have truly shown that they support and want to celebrate honest leaders,” noted Fayyaz Yaseen, Director of Programs for Accountability Lab Pakistan. “Let’s move away from ‘naming and shaming’ and towards ‘naming and faming’ those who uphold the Pakistani values of honesty, integrity and accountability.”

Ms. Katherine Twomey, First Secretary, Development, Australian High Commissioner was the chief guest of the crowning ceremony of the Integrity Icon Pakistan 2021. While addressing the audience she said that strong institutions provided the bedrock for an effective democracy. She emphasized the need to build strong institutions by supporting processes and frameworks that promoted good public service practices.

She further said that Australia recognized the need for effective frameworks to stamp out corruption. Australia regularly reaffirmed its commitment to anti-corruption measures to help promote higher rates of economic growth, enhance economic development and reduce poverty in Pakistan. She highlighted that to ensure accountability and improved governance it was necessary to pursue strong responses to corruption that supported democratic institutions, the rule of law, promoted stability and trust and fostered open and efficient markets for economies and societies to thrive.

Find our more about the Integrity Icons, including short videos outlining their accomplishments, at www.integrityicon.org/pakistan.

Integrity Icon is a citizen-run movement to identify and celebrate honest and exemplary government officials. Originating in Nepal in 2014, Integrity Icon has since evolved into a global movement in ten countries: Nepal, Pakistan, Sri Lanka, Mali, Niger, Nigeria, Liberia, South Africa, Mexico and the United States. In each country, local Accountability Lab teams run a nation-wide campaign to identify and encourage civil servants who demonstrate exemplary integrity in their work. Officials are nominated by and voted for by the public at large, with the annual campaign culminating in an award ceremony to celebrate the finalists. The Lab then works with the winners to push for integrity within government.
In Pakistan, Integrity Icon is in its fifth year, with hundreds of nominations received from across the country. Integrity Icon Pakistan is managed by Accountability Lab Pakistan.