The Progressive/Moderate Battle in the Democratic Party 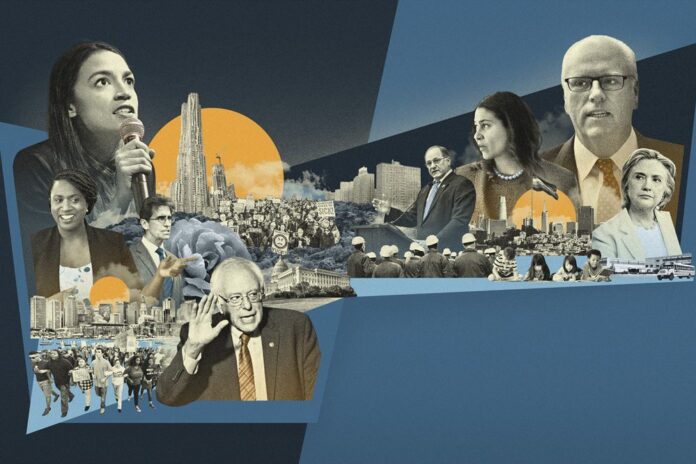 While the GOP’s internal battle is all about Trump and Trumpism, the conflict playing out on the Democratic side is between the party’s moderate and more progressive wings, and comes in two distinct forms.

The first manifestation of the internal Democratic conflict is between candidates who seek to broaden the appeal of the party beyond what has come to be defined as its “base,” and those who believe the path to victory is simply to expand the turnout among that “base vote.”

This was on display in Pennsylvania where the popular progressive lieutenant governor, John Fetterman, a supporter of Bernie Sanders, was running against a moderate congressman, Conor Lamb. Fetterman’s agenda matched that of Sanders on most issues, except one; Fetterman is not opposed to fracking, an industry that is popular in the state. And Fetterman’s persona is as compelling as his progressive politics. At 6’ 8”, with a shaved head, he looks more like a professional footballer or wrestler than a politician. He also has a direct plain-spoken approach that is appealing to the very middle-class, non-college educated white ethnic voters whom Democrats have long ignored. Lamb, on the other hand, looks like a congressman out of central casting— well groomed, polished, and a bit too careful. In fact, the main theme of Lamb’s campaign was that he was “more electable” than Fetterman.

Many establishment Democrats favored Lamb. They continue to believe that a combination of a liberal social agenda and courting what they call “the Obama coalition” (i.e., Black, Latino, Asian, young, and educated women voters) is the path to victory. As a result, Democrats have been losing elections in Midwestern states and have handed white working-class voters to Republicans on a silver platter. Fetterman, on the other hand, courted that Democratic base, but expanded it by making it clear to white voters that he’d also fight for them. Fetterman decisively won the primary with more than two-thirds of the vote.

While, for better or worse, Trump and fear of alienating his base has created a fragile unity among Republicans, Democrats are struggling to find the basis for unity between its progressive and moderate wings. The problem for Democrats is that the influx of millions of dollars in dark money expenditures may help defeat a few progressives who support justice for Palestinians, but it’s also deepening splits within the party.

In neighboring Ohio, another Democrat, Congressman Tim Ryan, also courted working class voters and won a clear victory. Like Fetterman, Ryan made it clear that he understood their concerns with the loss of jobs and the dislocation they were experiencing in a changing economy. Both Fetterman and Ryan will likely face Trump-endorsed candidates in November. Should they win, it not only would help ensure Democratic control of the US Senate, but also will demonstrate that Trump and the GOP’s hold over white working-class voters can be broken— but only if Democrats pay attention to them and their needs.

There is another, more convoluted way that the Democrats’ moderate/progressive internal debate is playing out this year. Polling now demonstrates that more liberal Democrats are no longer attached to Israel. While the Democratic establishment insists that their party is unified behind Israel, more liberal Democrats are more favourable to Palestinians and conditioning aid to Israel. This has played out in a few contests in the last two election cycles, with progressive congressional candidates defeating more mainstream supporters of Israel.

This year has seen an increase in the number of progressives challenging moderate Democrats in congressional elections. While the views of most of these progressives are more balanced on Israel-Palestine than their opponents, the issue has not been central to any of these contests. Instead, they have debated progressive concerns like Medicare for All, arresting climate change, and free public education.

Concerned with stopping the advance of progressives in Congress, the pro-Israel lobby AIPAC helped launch new political action committees (PACs). Already this year, these PACs have spent over $10 million in just a few races trying to defeat progressives.

What’s ironic is that while the sole purpose of these PACs has been to defeat “enemies of Israel,” never once do they mention this in their advertising campaigns. Most of their expenditures have been for advertising that smeared the reputations of the progressive candidates, accusing them of being too radical, not supportive of President Biden, or just not “real Democrats.”  And while they accuse the progressives of being “not real Democrats,” large donations to these PACs have come from Republican billionaires and the largest of these PACs has also endorsed over 100 Republicans, most of whom were supporters of Trump’s claim that the 2020 election was stolen.

To date, the record is mixed. The anti-progressive side has thus far won three competitive races and lost two, including an important contest in Western Pennsylvania in which they spent over $3 million in negative ads to tear down a charismatic black state legislator who eked out a victory last week. In another of these contests, the progressive, whom the PACs spent millions to oppose, is in a virtual tie and a recount is underway.

While, for better or worse, Trump and fear of alienating his base has created a fragile unity among Republicans, Democrats are struggling to find the basis for unity between its progressive and moderate wings. The problem for Democrats is that the influx of millions of dollars in dark money expenditures may help defeat a few progressives who support justice for Palestinians, but it’s also deepening splits within the party.

And until Democrats can unify around an approach that broadens their base with a progressive agenda that appeals to both what they currently identify as their base and those white working-class voters they have long ignored, they will continue to have trouble winning in states like Pennsylvania, Ohio, and Wisconsin. With this in mind, the outcome of this year’s internal conflicts in both the Republican and Democratic parties will not only determine which party controls the Congress, but also set the stage for 2024.