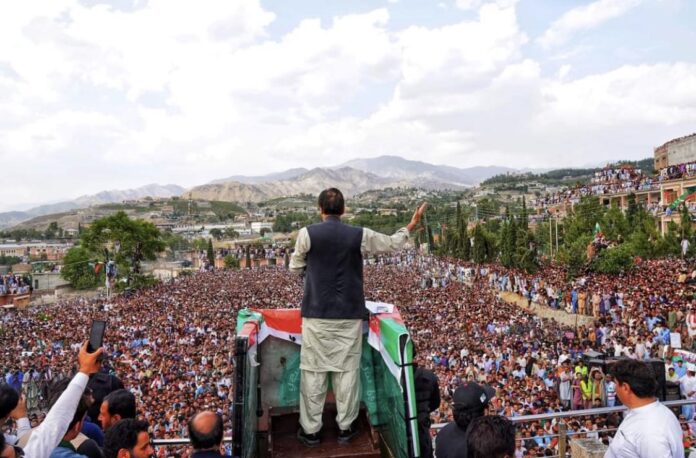 UPPER DIR: Pakistan Tehreek-e-Insaf chief Imran Khan Saturday reiterated his claim that the a combo of international powers, the United States, Israel and India, had conspired together to bring “boot-polishing” Prime Minister Shehbaz Sharif to power.

“Shehbaz was bought into power not because he is intelligent, but because he would obey all of their orders, the first of which was a price hike in petrol as ordained by the International Monetary Fund (IMF),” the former premier stated while addressing a rally in the Upper Dir region of Khyber-Pakhtunkhwa.

Imran maintained that a Rs7 increase in petrol and diesel was “inhumane”, adding that the PTI government did not succumb to IMF’s pressure when they ordered the former government to increase petrol and electricity prices.

“My life and death is Pakistan, and I refuse to bow down before anyone but God,” Imran said.

He stated that the PTI regime had decreased petrol prices by Rs10 when the IMF had asked them to increase petrol and electricity prices.

“We wanted to save our people from global price hikes and aimed to get money from elsewhere to offer respite from inflation,” he said, adding that the price of all commodities increased when petrol and electricity were more expensive.

Imran further claimed that his government wanted to increase the wealth of the country and that the average income increased from Rs16,180 to Rs26,300 under his three-year tenure.

“We tried to increase the country’s wealth and subsequently increase tax to reduce the burden of inflation,” the former premier added.

He declared that the only way to free Pakistan from economic ruin and enslavement was an election where the people could decide which government they wanted in power.

Imran Khan further alleged that Shehbaz Sharif only came into power to obtain relief from his ongoing corruption cases which he was going to be “punished for”.

The PTI chief claimed that there were cases concerning frauds of Rs16 billion in the Federal Investigation Agency (FIA) and Rs8 billion in the National Accountability Bureau (NAB) against Shehbaz and his family.

“The day he [Shehbaz] was sworn in as prime minister, he and his son were both to be indicted under the FIA case. Their entire reason to come into power was to escape punishment,” he said.

Former prime minister Imran Khan has said the PTI government increased the average income of the people of Pakistan while being in power despite crunch economic conditions.

Imran Khan said the PTI government was working hard to control increasing inflation and rejected the demands of IMF to increase fuel and electricity prices. Sadly the ‘imported govt’ has bowed down before the IMF and increased fuel, electricity and gas prices on its demand. Prices of everything have gone up and touched sky-high during the tenure of Shehbaz Sharif government, he added.

He censured the incumbent government for hiking the petrol and diesel prices up to Rs60 in just one week. He added that celebratory moments were witnessed in Indian electronic media and newspapers after the ouster of the PTI government in Pakistan.

The former prime minister also expressed suspicions that the current rulers are going to dissolve their corruption cases by shutting down the National Accountability Bureau (NAB). He asked Buner people to be prepared for his call to fight for real independence in the country.

Imran Khan alleged that the money of the Sharif and Zardari families is abroad and they are not worried about increasing inflation in the country. “I have always given the examples of the Soviet Union and the United States (US) having the strongest military powers. The Soviet Union had fallen just  after the economic collapse.”

He said that country is passing through critical time in history and said that there is only one solution to the problems of the country and that in  fair and transparent election.