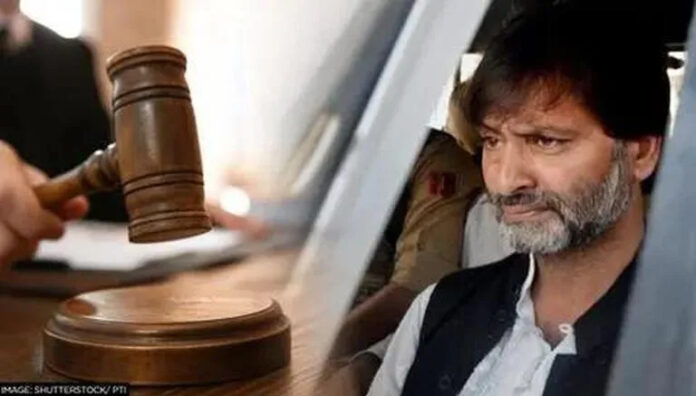 On 19 May 2022, Malik was convicted by the Indian National Investigation Agency (NIA) Court on charges of conspiracy and waging war against the Indian state. It is pertinent to mention that during the first five years of the BJP/ RSS government led by PM Narendra Modi no militancy-related cases against him or his party were filed.  India in defiance of the government signed an agreement that violated the ceasefire pledge made in 1994 when the TADA court in Jammu started a trial of these 30-year-old militancy-related cases which is actually against the spirit of the truce. It is sad to say that the recent development on Yasin Malik’s case exposes the nefarious Indian designs to undermine historic and distinct political and cultural identity of Indian-Occupied Kashmir. Such cases against Kashmiri freedom fighters highlights a malicious Indian campaign to deprive the Kashmiris of their true leadership.

Yasin Malik is a Kashmiri freedom fighter and chief of the Jammu and Kashmir Liberation Front (JKLF). He along with other Hurriyat leaders have been illegally imprisoned by India in a jail in New Delhi for the past several years. The Indian court has convicted Yasin Malik in a 30-year-old concocted case. International media like Aljazeera has termed the Indian illegal action a political vendetta “The filing of all these cases against the leading pro-freedom leader has forced many in the disputed region to fear that the Indian state has already decided to “sign his death warrant”.

According to an open letter Malik released from prison through his family in March 2020, JKLF had announced a unilateral ceasefire in 1994 after assurances of a political settlement and suspension of “militancy-related cases” against him and his colleagues by the Indian state. India is deliberately trying to suppress the voices of Kashmiris across the globe.

However, Yasin Malik has publicly accused the judge of behaving like a “prosecuting or police officer” and has complained being denied a fair trial. He stated, “though I have every legal right to be presented physically before the court, the judge and the CBI at the behest of government are not allowing me to present myself before the trial court physically. I am being presented through video conference, where neither I am able to hear the arguments of the lawyers nor am I being allowed to speak.” However, the bravery and fearlessness of Yasin Malik is firm as despite long imprisonment, ailment and knowing the fate; he courageously talked in court telling them the reality of the cases against him. During the trial, he protested the charges leveled against him and said he was a freedom fighter. “Terrorism-related charges leveled against me are concocted, fabricated and politically motivated,” “If seeking freedom is a crime, then I am ready to accept this crime and its consequences”.

The international community should take note of the Indian government’s mistreatment of political prisoners. The conviction of prominent Kashmiri leader Yasin Malik on fake terrorism charges is a futile effort to silence voices critical of India’s blatant human rights abuses. The Modi regime must be held accountable.

Likewise, Tufail Raja, the lawyer representing Malik in the NIA’s “terror funding” case, alleged that cases are being fabricated against him. Raja said Malik has decided that if the government does not offer him a fair trial, he will boycott it.  Khurram Parvez, a leading human rights activist said “Fair trial is a globally recognized right for everyone. If you are suddenly pulling out old cases and not even allowing the accused to properly represent his case, then there would be question marks over it ” Human rights groups and activists not only in Indian-Occupied Kashmir but also around the world, have also accused the Indian government of being unfair towards Malik.

Therefore, it is public knowledge how the Indian government 1984 judicially murdered the JKLF founder Maqbool Bhat by sending him to the gallows. People in the IIOJK fear Malik is next in line to be “judicially murdered” by India’s right-wing government to further their political gains. Former Indian diplomat Wajahat Habibullah also acknowledged speculations of him being hanged doing the rounds. Faizan Bhat, an Indian-Occupied Kashmir–based independent researcher said, “We have seen that when it comes to Kashmiri political detainees, apart from the Indian state, even the judiciary also bypasses all rules, laws, and guidelines”. The AJK PM condemned Malik’s unilateral trial by a “kangaroo court” in India, two days after the incarcerated JKLF chairman was virtually coerced into pleading guilty in a fabricated and politically motivated case of terrorism filed by the notorious NIA.

On 17 May 2022, UK Foreign Office minister Tariq Ahmad told the House of Lords that the British government was monitoring the trial of Kashmiri separatist leader Yasin Malik very closely, under the heading of “Human Rights Situation in IIOJKJ”.Another British parliamentarian Lord Qurban Hussain said that Malik is a “prominent Kashmiri leader, who has a huge following in the UK as well, Hussain claimed that Kashmiris suspect the Indian government wants to get rid of him too”. “His life is in real danger”.

Pakistan’s former Ambassador Abdul Basit also tweeted that “Yasin Malik is an indisputable Kashmiri leader and in Tihar Jail, Delhi for years. Modi Govt is preparing false grounds to hang him as was done in case of Maqbool Bhat and Afzal Guru. Kashmiris will not rest till given their right to self-determination as was promised to them by UN.”

Furthermore, in a statement issued following Malik’s conviction, the Pakistan Foreign Office (FO) called the development “highly reprehensible” and said that the “fictitious charges” against him were not only in defiance of the Universal Declaration of Human Rights (UDHR) and International Covenant on Civil and Political Rights (ICCPR) but also attempted to make “conjectural insinuations about Pakistan”. The Pakistani government also strongly condemns another abhorrent attempt of the Indian Government to deprive the Kashmiri people of their true leadership in Indian-Occupied Kashmir..

The international community should take note of the Indian government’s mistreatment of political prisoners. The conviction of prominent Kashmiri leader Yasin Malik on fake terrorism charges is a futile effort to silence voices critical of India’s blatant human rights abuses. The Modi regime must be held accountable.

No matter how much it tries to mislead the world, India will never be able to suppress the legitimate struggle of Kashmiris against foreign occupation. India is the biggest impediment to peace in South Asia. It must end its state terrorism and implement UNSC resolutions on Kashmir.