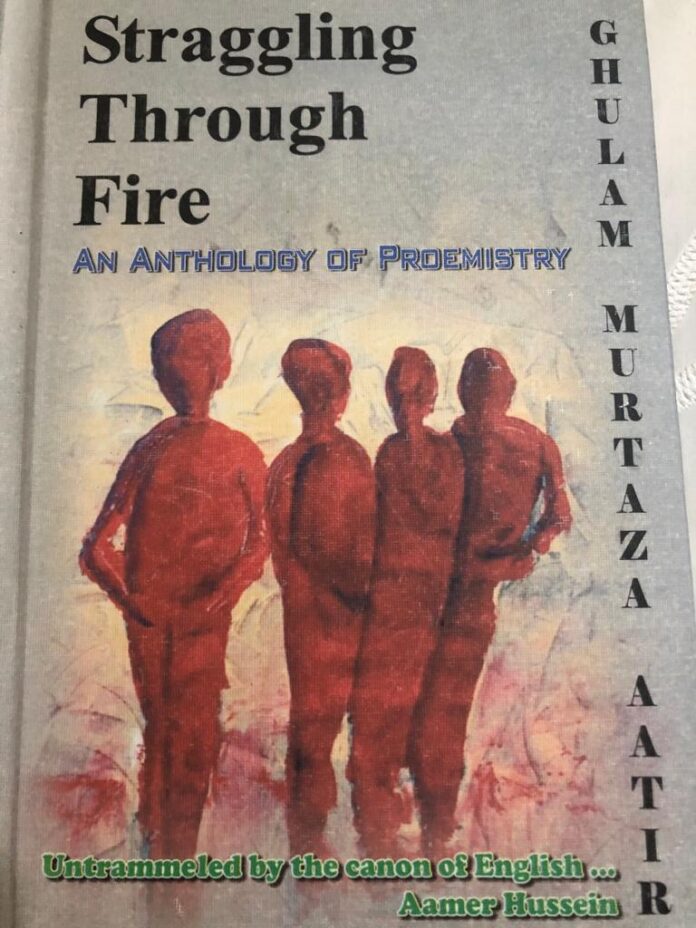 Pakistani literature in English seems to have received a bolster with the appearance of two recent publications in the language viz. Straggling Through Fire (An Anthology of Proemistry) and A Tale and Twenty One Poems authored respectively by Dr Ghulam Murtaza Aatir, a seasoned university professor of English, and M.A.Q (aka Muhammad Ahmad Qasmi), a 21-year-old literary prodigy tracing his genealogy to late Maulana Jafar Qasmi, an eminent scholar, mystic, broadcaster, and linguist, hailing from the historic town of Chiniot, and his son late Qazi Mudassir Hasan Qasmi, a scholar of Arabic and a histrionic genius. Innovation or inventiveness is the common hallmark of the two books.

Straggling Through Fire is purported to be an anthology of ‘proemistry’, a seemingly nife terminology coined by its author to describe and denominate a new brand of poetry —– a dexterous mix of prose and verse, at places impinging upon the vast, uncharted terrain of prose poetry.

It would be pertinent here to quote famous literary historian and critic David Daiches (1912-2005), from his seminal work titled The Present Age (1963) with a view to examining and exploring the form and texture of this curious genre of poetry. He refers to the revolt against the Victorian Romantic poetic tradition from the Imagists ‘in favour of a poetic practice and a critical theory which exalted cerebral complexity, allusive suggestion, and precision of the individual image.

The poet was no longer the sweet singer whose function was to render in mellifluous verse and a more or less conventional romantic imagery a self-indulgent personal emotion; he was the explorer of experience who used language in order to build up rich patterns of meaning which, however impressive their immediate impact, required repeated close attention before they communicated themselves fully to the reader. A core of burning paradox was preferred to a gloss of surface beauty. It was not the function of poetry to pander to the languid dreams of a pampered sensibility, to revel in the sweetness of a cultivated nostalgia or the sad plangency of controlled self-pity’.

The aforesaid critical dictum could be conveniently though gainfully stretched to the appraisal of the content, form and stylistics of Ghulam Murtaza Aatir’s brainchild ‘proemistry’ which is anthologised in his present work Straggling Through Fire. The author seems to have laboriously but adroitly elaborated the pattern, structure and thematic formulations of his subject in a ‘proem’ titled ‘What is a Proem?’ The second stanza broadly indexes the contours of the newly crafted/adopted genre:

The substance of these ‘proems’ is contemporaneity —- both in its multeity as well as diversity. The tone of the omniscient speaker here, is often ironic, intended to discover/uncover the sham camouflaging the existentialistic realities of life such as hypocrisy, untruth, deceit, impiety, snobbery, avarice, vanity, vulgarity, misrule, poverty, hunger, disease, exploitation, war hysteria, corruption, crime, anarchy, obscurantism, bigotry, terrorism, injustice et al.

Dr. Patricia Hopkins Lattin’s (Ex-Professor of English, City University of New York) opinion of the author of the book is quite convincing when she proclaims that ‘A passionate voice writes of the spiritual confusion of one caught between cultures, languages, and religions. The poet skilfully moves back and forth between the physical and the metaphysical to show us a world seemingly ruled only by the laws of the jungle.’

Another literary elite Prof. Dr. Asif Khan’s (IUB) viewpoint about the contents of the book is equally pertinent that reads: ‘Almost Aesopian in their satirical and moral intent, these proems are a mixture of odd parts: stark reality and wild imagination, tradition and adventure, prose and poetry. Readable and startling.’ Dr. Safeer Awan’s averment that ‘The creative spectrum of Murtaza defies easy interpretation in the given models of (sic.) critique’ is equally valid in the context of the subject text.

All said, the book looks like a trend-setter for its eerie newness, brisk colloquial style, and grave text; one hopes that it will not only delight but also bemuse the discreet adult readers and students of literary studies, in equal measure.

A Tale & Twenty-one Proems is Muahmmmad Ahmad Qasmi’s maiden literary venture. He is a budding creative youth and a prodigious descendant of Maulana Jafar Qasmi (grandfather) and Qazi Mudassir Hasan Qasmi (father), both hailing from the historic town of Chiniot. Muhammad Ahmad Qasmi is only 21 yet his precocity makes him appear as a mature young individual with a sparkling creative urge.

The solitary ‘tale’ in the book is narrated in a first person monologue predicting the plight of a would-be lover with a narcissistic frame of mind. It may also be termed as a reverie reverberating in his sub-conscious. Elusive of translation, it can be described as a vision arising from a perennial conflict of binaries such as love and hate, light and shade, courage and timidity, hope and disgust. The dreamgirl in the tale personifies the protagonist’s unrealised embryonic yearnings seeking maturation in the workaday world of harsh, unpalatable actualities.

‘Twenty-one poems’ are an auxiliary, as it were, to the inconsequential prose narrative. The young poet is amazingly original in thought, content and form. The ubiquitous persona in these poems seems to be intently self-conscious yet fully alive to the calamitous dilemma of existence, both diurnal and nocturnal. The speaker is proud of his ‘bloodline’, and rightfully so. His soft but emphatic tone speaks for his native gentility.

The publication as a whole bears ample testimony to the authorial skills of its ‘maker’. The writer’s apt choice of words and idiomatic usage of the language coupled with the artistic felicity of his pen tend to forebode a bright future for him as an adept story teller and a meritorious poet. Observation, experience, and study will groom his style in the days to come. By the bye, the writer would do well to thoroughly revise the manuscript and rectify some conspicuous typographical errors inherent in it, in the next edition of the book.