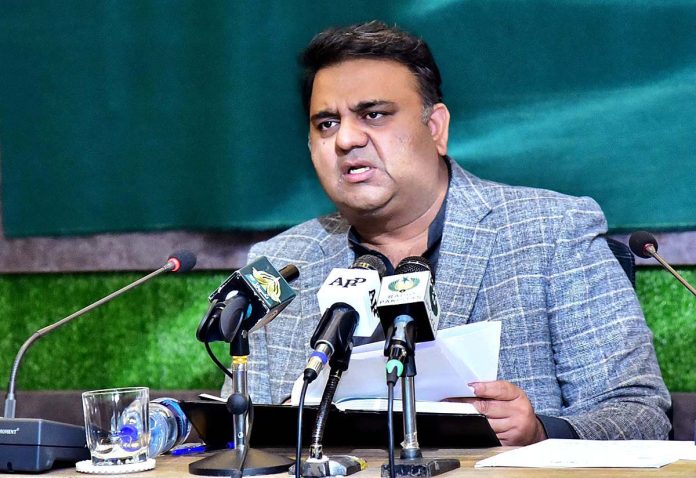 PTI Senior Vice President Fawad Chaudhry Monday warned the government against using force to stop the “Azadi March” as the party prepares to head to Islamabad to seek early elections and send the coalition government packing.

In a press conference flanked by party leaders, the former information minister told the government that it could arrest PTI leaders and workers if it wanted, but it would not be in its favour.

PTI Chairman Imran Khan had announced yesterday that his party’s much-anticipated Islamabad long march would begin on May 25 and he will meet his workers and supporters at 3pm at the Srinagar Highway.

The PTI chairman also told the workers that he would be leading the march from Khyber Pakhtunkwa to Islamabad himself.

Laying out the plan for the march in his presser today, Chaudhry said Khan would leave Peshawar in the morning on May 25 and while leading a rally from the KP capital, he would reach Islamabad on the same day.

He noted that the call to march towards Islamabad was restricted to people in Punjab and Khyber Pakhtunkwa, while workers in Karachi would hold protests in their city.

The ex-information minister also said that the PTI chairman would also announce the next action plan on June 3, indicating that the march could extend.

The PTI leader further told the government that it could not stop “hundreds of thousands of people” from marching to Islamabad.

“Women, children, ex-servicemen, doctors, and bureaucrats will be part of our march. Retired generals will also be part of our long march,” claimed Fawad.

The former federal minister said there are “responsible” officers in the administration who have informed PTI that they are being “pressurised”. He claimed that several officers would resign, but would not play their part in stopping the march.

Moving on, the ex-information minister said the country was facing “embarrassment” due to the Sharif family and the Pakistan Democratic Movement (PDM).

But he also told the PML-N to hold an inter-party consultation and quit the coalition government claiming that PPP Co-chairman Asif Ali Zardari had the upper hand and due to him, “Pakistan was suffering”.

Berating the government, he said that India had recently slashed the price of petroleum products after it imported cheap oil from Russia.

“We were about to enter the same deal, but we weren’t allowed to sign it.”

Praising the ousted government’s accomplishments, Chaudhry said during their term, the country witnessed a GDP growth of 6% and increased employment opportunities.

He claimed that the United Arab Emirates and Saudi Arabia have made it clear to the coalition government of their intentions. The statement comes amid reports that Riyadh has linked its support to Islamabad with the revival of the stalled International Monetary Fund’s (IMF) programme.

“Their countries’ intelligence agencies have told them that the people of Pakistan do not stand with the current government,” he said.

The ex-information minister said with every passing day, economic and political crises were deepening.

“Till the political situation does not settle, the economic turmoil will continue.”

He went on to say that if the incumbent government remains in power for the next two to three months, there is a fear of Pakistan defaulting.