Is Le Pen a French version of Imran Khan? 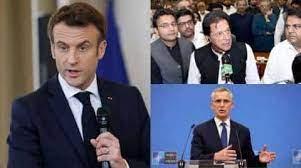 As a practitioner of semiotics, I follow speeches of national and international leaders and policymakers because their speeches are meant to be well constructed with incrusted meanings. After peeling, knowing all the layers, their policy, future inclinations, and diplomatic twists are worth the effort.

Recently I examined the speech Emmanuel Macron delivered after winning re-elecion for a second term. What is interesting here are the similarities between France and Pakistan in current times such as a highly politically polarized society with visible divisions.

Political experts were not sure that Emmanuel Macron could be re-elected now. When asked why they were not sure, they unanimously point out the divided society even on an ideological basis. The question is how Emmanuel Macron overcame that? The most applauded theory I find is about his diplomatic norms.

The Ukraine crisis supported Emmanuel Macron in a mysterious way, his attitude toward Russia and not breaking ties with Russian President Vladimir Putin paid him off in the strangest way. He repeatedly said that apart from all European hate for Putin, he must not be treated or dealt with as an individual. Let’s try talking to him again on a diplomatic level, let’s not cut all the diplomatic ties.

French people on the other hand received harsh statements from opposition leader Marine Le Pen. Her stance toward migration, making France great again, no tolerance for those who differ, and above all stiff foreign diplomacy, is her identity. She is more or less the French Imran Khan, she never finds it useful to have need-based working relationships. Marine Le Pen was also infesting the thoughts of good versus evil and hope for a utopia, of course never seen by anyone. Political experts say her harsh tone, bullying style, and pursuit of ultimate good scared a vast population, even those who are looking for an alternative. On the other hand, Macron’s open and flexible foreign policy and adhering to strict diplomatic norms while publicly speaking led to his victory, his decent and public speaking without any slur or name-calling paved the way for his apparently tough victory.

French people are politically mature enough because their political journey is far longer than ours, and they sense that at least in these chaotic times sanity must prevail. They understand a self-obsessed self-righteous narcissist will doom their republic. The very essence of democracy is disagreement with decency and an individual who is flouting this norm has less place in matured democracies, even while offering a shiny future. The most valued leadership quality is “Acceptance for all”.

Emmanuel Macron in his first speech after winning summed up all the points who led to his victory, for instance, his attitude “I am the warden of the divisions that have been expressed”, his acknowledgment “that our country is full of divide and division”, his commitment to decency when he stopped the crowd from hooting by saying “no booing tonight”, his sense of responsibility was evident when he said “now I am not a candidate of a party I am president of all”, his inclusion for all policy “those who did not vote for me I will address their silence”, and a practical solution for future course of action “creativity and responsibility”.

No bullying, no abuse, no threats, no NAB, no political victimization, and nothing mentioned related to a bizarre name given to the half of the population who did not vote for him. No umbrella terms for a group of people, no we-will-see them-now stuff.

This all boils down to the fact that he has the pulse of the people and he knows that his population cannot be fooled by fake fairyland promises, by slamming doors on this and that country, by saying absolutely not to this and that, by pretending to be the saviour and the righteous.

For comparison, I take former Prime Minister Imran Khan as an example here who is contesting everybody around him by believing that everybody except him is a stooge, corrupt, dishonest with Pakistan, and of no worth. When I analyze his speeches, I find phrases and words like “my Pakistanis”, “when I came to know”, “since my government”, “they pressurized me”, “I have everything in my life”, “I lived in Europe (symbol of pride for many Pakistanis)”, “my 25 years struggle”, “when I entered into politics” etc. His oration revolves around “me, “my” and “I” and evolves from “him”. This is one of the reasons that many academicians now fear he has become a cult leader, who does not care about the result of his preaching. History testifies how such leaders threw their followers and even nation into deep trouble.

The sheer amount of me, I and my is intimidating, unfortunately, we Pakistani are not in habit of following a leader, we tend to follow a hero, so leadership qualities are not a big issue where the hero has to be as pretentious as any Hollywood or Bollywood hero in a particular role. Since on-screen and off-screen are two different lives, superheroes saving the earth in a supernatural way may not be able to in real life.

The cultural history of France indicates the acceptability of differences of opinion, adaptability of new thoughts, experimentation of several revolutions, and a stiff fight spreading over two centuries for freedom of speech are strong inputs that grew the social fabric. There is no place for cult-like thoughts by the majority though freedom of speech provides room for extremist thought to survive. I read a theory that it takes 70-plus years to attain social maturity, for countries that lived under foreign rule 100-plus years. Now we are a 75-year-old country but I fear to believe that our social maturity is in reverse gear when I listen to videos recorded in the early 70s of university students. What a thoughtful discussion you find in these videos where youth is found talking about international movements, philosophy, history, and human rights, and now you can find a majority of our youth express just slur and sarcastic taunts having no connections with global realities. Please let me say that our old Pakistan of the 1970s was much more mature and resilient than today’s Pakistan.