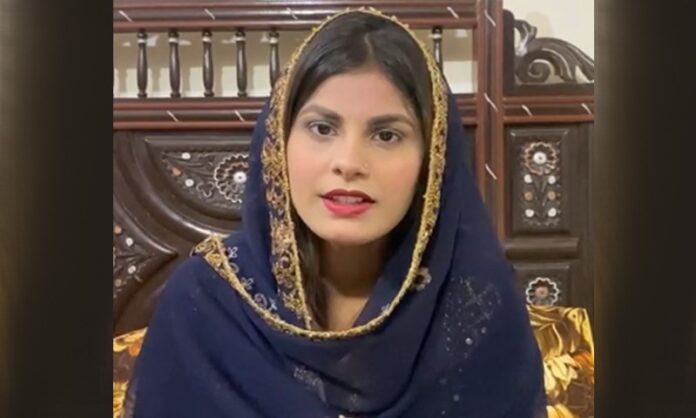 However, they said Kazmi had “willingly” tied the knot.

“My name is Nimra Kazmi, my baba’s name is Nadeem Kazmi. I live in Karachi. I came here [DG Khan] on [April] 17 and observed Nikah on 18. I came on my free will and nobody abducted me. I want to get all my videos deleted from [social] media and I am very happy,” says Nimra in a video viral on social media.

The disappearance of the girl was the second case after a teenager of the same age, Dua Zehra Kazmi, went missing from Karachi’s Al Falah on April 10, but police have not yet been able to recover her.

In a video statement that surfaced today, Kazmi said that nobody had kidnapped her and that she tied the knot willingly. “I am very happy,” she said, adding that she got married on April 18.

She also requested to remove her videos from social media.

Earlier in the day, Sindh Chief Minister Murad Ali Shah Monday said that the police were taking measures to recover the missing girl from Saudabad.

The missing girl’s mother had said that she left her home at last week 9am to go to work but when she returned, her daughter was not at home. Despite frantically searching for Nimra, she was nowhere to be found.

Providing details about her daughter, the grief-stricken mother — a resident of the Saudabad read — had said that Nimra was a grade-10 student and was preparing for her final exams.

Karachi police earlier in the day traced the whereabouts of Dua.

Sindh Chief Minister Murad Ali Shah announced the development but did not provide further details as he said the matter was “sensitive”.

“Police are searching for the girl using the address on the marriage certificate,” he said, adding that there was no truth to reports that she had been recovered.

“The real facts will only surface once she is recovered. Lahore police are in constant contact with Karachi police,” he said.

Zehra went missing around April 17. Her family said she had gone downstairs at about 12:30 pm to dispose of some garbage. They also revealed that she hasn’t been in school for a year and a half now.

“I don’t have an enmity with anyone. I have received two calls for ransom from the kidnappers. One of the calls was made from a landline number, while the other was made from a mobile phone number on WhatsApp,” said her father.

After receiving the ransom calls, he immediately informed the police about them.

Zehra’s parents even said they will not take any action against the abductors if their daughter is returned safely.