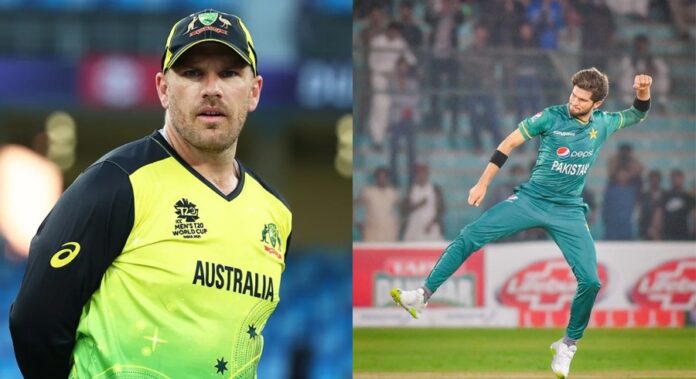 The young pacer outclassed the 35-year-old for a golden duck in the semi-final of the T20 World Cup.

“Shaheen is a world-class bowler and is wonderful to watch. He can swing the new ball and execute really well at the end of the innings as well.” Finch said during a virtual press conference.

Australia will be facing Pakistan in a three-match ODI series at Gaddafi Stadium Lahore, which has a history of producing high scoring matches.

“The wicket looks dry, but we expect it to play good. The dew will play a huge factor in the series. We will see that tonight when we practice that how much dew falls in,” Finch added.

“Pakistan and Australia both have played some amazing cricket. Whatever we do tomorrow whether bat or bowl the first 10 overs will be very important.” Finch stated.

The 50-over World Cup is scheduled to begin next year in 2023 and all teams have started their preparations accordingly.

“ Every decision we are making has one eye towards the 2023 World Cup. It’s about building the depth in the squad. It’s a really good opportunity to add on to our experience.” Finch added.

The right-handed batter praised Pat Cummins for his bold captaincy and appreciated the bowling attack of the Pakistan team.

“ Pat made a great declaration in the last Test to keep the game in the balance. The easy option would be to keep batting and bat Pakistan out of the game and minimize the risk.”

“ Pakistan has some world-class player. Babar Azam leads the pack in terms of ODI batsman, Shaheen with the ball, they have a very good bowling attack, especially with the new ball. We have seen Haris Rauf in the Big Bash League (BBL), Hasan Ali has shown his class in the past and Usman Qadir can spin the ball big,” Finch added.

Australia have not played much ODI cricket in the last 15 months and adjusting to the format with an inexperienced team could be a challenge for the Kangaroos.

“ Not playing much ODI cricket since December 2020 is not a problem. ODI format is one of the easiest to adjust into quickly. ODI gives you enough time to get back into the game, whereas T20 cricket could be challenging and Test cricket can test every part of you right away.” Finch stated.

“ Me and Adam Zampa have played the most ODIS in the squad. It’s a good opportunity for the youngsters to make a permanent spot in the team.” Finch added.

“ We are looking forward to win the series even though we have an inexperienced squad but that can be a blessing at times as it gives you a chance to play freely,” Finch stated.

The historic series between Australia and Pakistan was special for the Aussies as none of the Australian players had played international cricket in Pakistan before. Finch will be in action for the first time in Pakistan in tomorrow’s match.

“ I am looking forward to start the series tomorrow and excited to play for the first time in Pakistan.”

“ As a captain, I would try to perform well and lead from the front. There is a bit of pressure on the senior players but we will try to play well.” Finch further added.

Australia won the Test series 1-0 and will play the first ODI of the three-match series tomorrow at Gaddafi Stadium Lahore.