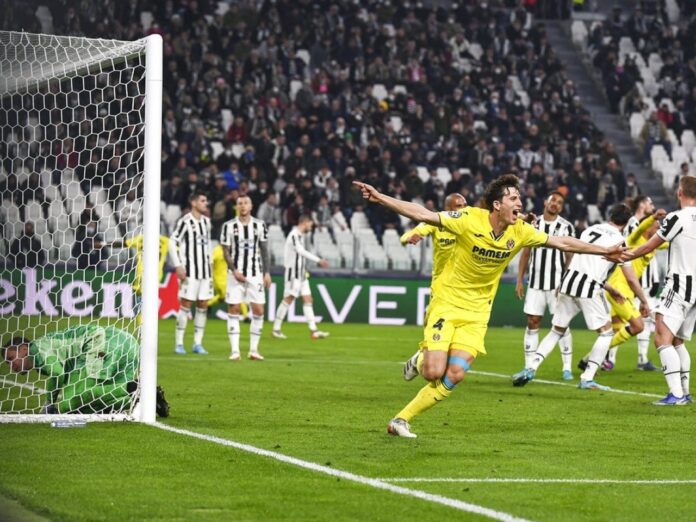 TURIN: Villarreal reached the quarter-finals of the Champions League on Wednesday after inflicting a humiliating 3-0 defeat on Juventus in Turin to go through 4-1 on aggregate.

Penalties from Gerard Moreno and Arnaut Danjuma and Pau Torres’s tap-in in the final quarter of an hour were enough for Unai Emery’s well-organised side to see off the Italians at the Allianz Stadium and make Friday’s last-eight draw.

“We thought we could do it, we’ve always shown that in the big games we compete, the team gives its best… we all want to be in there with the best in Europe, we’re going to keep dreaming and we’re going to do it together.”

Europa League holders Villarreal stunned Juve with three sucker punches after spending most of the match on the back foot, content to hold off the hosts’ attacks which got less potent as the match wore on.

An embarrassing loss was just Juve’s second since the end of November and punctures a dogged run of form which has put them back into the league title race at home.

Massimiliano Allegri’s side were loudly booed off by the home crowd who watched their team shrink from a promising start and bounce off a yellow wall before being bundled out of the competition.

Italy are now without a single representative in this season’s Champions League as it moves into its latter stages, as a cynical, clinical Villarreal beat a Serie A team at their own game.

“For the first 75 minutes we played well, we had chances in the first half. They put themselves behind the ball and only an episode like the one that happened could have changed the course of the match,” Allegri said to Amazon Prime.

“They had nine men behind the ball and they didn’t come out to counter-attack… Their intention was to take advantage of a piece of good fortune.”

Missing a host of starters and with Paulo Dybala, Giorgio Chiellini and Federico Bernardeschi only on the bench, Juve started well and had the first opportunity in the 11th minute of a breathless first half when Alvaro Morata had his powerful header well saved by Geronimo Rulli.

Two minutes later Morata was involved again when he and Juan Cuadrado, who had supplied the cross for the Spaniard’s header moments before, stepped on each other’s toes and allowed a huge chance to shoot go begging.

Then Dusan Vlahovic had a long-range drive pushed aside before he was denied by the crossbar, his first-time strike from Mattia De Sciglio’s cross beating Rulli but thwacking out off the woodwork in the 21st minute.

Juve were almost punished for their inability to put away their chances seconds later when Giovani Lo Celso charged forward with teammates swarming into the home team’s box and with options to either side curled a shot just wide.

Villarreal clearly decided to shut up shop in the early minutes of the second half in the hope of stemming the flow of Juve chances and the game slowed down to almost a crawl until Adrien Rabiot thumped an effort from distance at Rulli and Cuadrado fired wide on the hour.

The away side easily held Juve at bay for the rest of the match and when Francis Coquelin was clumsily brought down by Daniele Rugani, substitute Moreno was fresh enough to send his spot-kick past Wojciech Szczesny with 12 minutes remaining.

Moreno’s goal, which came after referee Szymon Marciniak’s pitchside video check, deflated the crowd and when Torres pushed home the second from Serge Aurier’s cross in the 85th minute the game was well and truly up.

The boos began to ring around the stadium, and they only got louder when Matthijs de Ligt charged down Danjuma’s shot with his arm in the closing moments and the Netherlands international made it a perfect evening for Villarreal, and a nightmare for Juve.