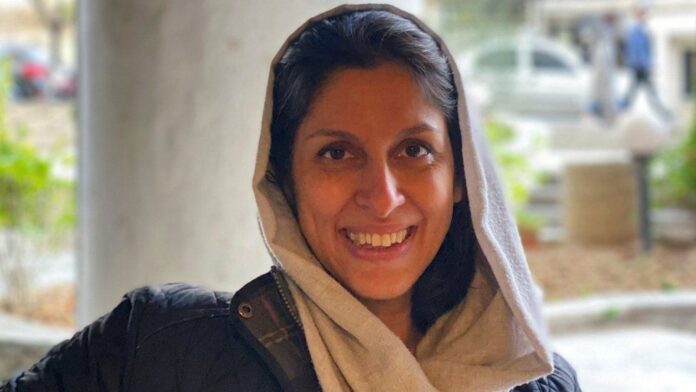 LONDON: Two British-Iranians landed back in the United Kingdom in the early hours of Thursday morning after being freed from years of detention in Iran.

Their release on Wednesday came as the UK government confirmed it had paid a longstanding debt over a cancelled defence contract.

Nazanin Zaghari-Ratcliffe and Anoosheh Ashoori touched down at RAF Brize Norton in southwest England at 01:08 am (0108 GMT) after a stopover in Oman.

Footage showed the pair in the cockpit talking to the pilots of their plane, before they disembarked and walked across the tarmac together to the main airport building, where their families were waiting.

Both appeared relaxed, smiling and waving briefly at the cameras before heading inside.

“Delighted that Nazanin and Anoosheh have landed safely in the UK and are reunited with their families and loved ones,” British Foreign Secretary Liz Truss tweeted. “Welcome home.”

Zaghari-Ratcliffe’s husband Richard Ratcliffe had told AFP at the family home “the first thing she always wanted to do was me make her a cup of tea”.

“I’m relieved that the problems were solved,” he said, standing next to their young daughter Gabriella, adding that the government should make sure “it doesn’t happen again”.

Ashoori’s family said they were “delighted… 1,672 days ago our family’s foundations were rocked when our father and husband was unjustly detained and taken away from us”.

“Now, we can look forward to rebuilding those same foundations with our cornerstone back in place,” they said in a statement.

UK lawmaker Tulip Siddiq, who represents the north London district where Zaghari-Ratcliffe’s family live, had tweeted a photo of her constituent smiling on board a plane.

“It’s been 6 long years — and I can’t believe I can FINALLY share this photo,” she wrote.

Truss also announced that Morad Tahbaz, an Iranian-American who also holds British nationality, has been released from prison “on furlough” to his Tehran home.

The pair were released as major powers in Vienna close in on renewing the landmark 2015 Joint Comprehensive Plan of Action (JCPOA) on regulating Iran’s nuclear programme.

The deal gives Iran sanctions relief in exchange for curbs on its nuclear programme and Tehran said on Wednesday that “two issues” remain with the US to restore the deal.

Truss confirmed that, with diplomatic assistance from Oman, London and Tehran had “in parallel” resolved a £394-million ($515-million, 470-million-euro) debt dating back to the 1970s and the era of the Shah of Iran.

The debt payment deal was reached “after highly complex and exhaustive negotiations”, Truss said, and the money can only be used for humanitarian goods.

The families of both Zaghari-Ratcliffe and Ashoori believe they were being held as political prisoners until the issue was settled.

The UK has consciously avoided saying the detention of the pair, and others held in Iran, was linked to the debt for an order of tanks that was cancelled after the 1979 Islamic revolution.

Foreign Minister Hossein Amir-Abdollahian said on Wednesday that Iran had received the money “a few days ago”, adding that it was “wrong to link Iran receiving its debt… to the release of these people”.

Zaghari-Ratcliffe, a project manager for the Thomson Reuters Foundation, the philanthropic arm of the news and data agency, was arrested in Tehran on a visit to family in 2016.

She was sentenced to five years in prison for plotting to overthrow the government.

Last year she was given a further 12-month jail term for taking part in a rally outside the Iranian embassy in London in 2009.

Ashoori, a retired engineer from southeast London, was arrested in 2017 and jailed for 10 years on charges of spying for Israel.

The pair flew from Tehran to Muscat on a Royal Air Force of Oman flight, the foreign ministry said, and then from Muscat to England.

Tahbaz was arrested alongside other environmentalists in January 2018 and sentenced to 10 years in jail for “conspiring with America”.

The government must renew “its calls for the release of the UK nationals Mehran Raoof and Morad Tahbaz, both of whom are still going through an ordeal all too similar to Nazanin and Anoosheh’s,” he added.

Raoof, a labour rights activist, was detained in October 2020 and was being held in solitary confinement, according to Amnesty.

Dual nationals from Austria, Canada, France, Germany, Sweden and the United States have also been arrested in similar circumstances.

Richard Ratcliffe staged a hunger strike outside the foreign ministry in London last October after his wife lost her last appeal, and as government ministers held talks with Iranian counterparts.

She was freed from prison with an electronic tag in March 2020 because of the coronavirus pandemic but had been held in Iran under a form of house arrest ever since.