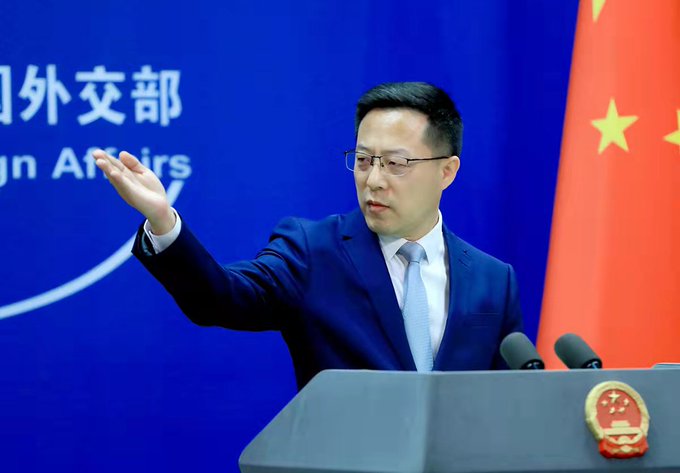 Any attempts to distort China’s intentions and spread rumors to smear China are “irresponsible and immoral,” as they aim to provoke confrontation and take advantage of the Russia-Ukraine conflict for profit, Chinese Foreign Ministry spokesperson Zhao Lijian said at a regular press briefing on Wednesday.

On Monday, Chinese State Councilor and Foreign Minister Wang Yi stressed that the sanctions should not affect China when speaking to his Spanish counterpart Jose Manuel Albares. “China has the right to safeguard its legitimate rights and interests,” Wang added.

At Wednesday’s presser, a journalist asked Zhao if Wang’s remarks serve as a warning to other countries that China should not be sanctioned. Zhao responded that China’s position on sanctions has remained clear.

Sanctions are not the way to solve problems, Zhao said, adding that China has urged all countries to work toward de-escalation through dialogue, consultation and negotiation to prevent further escalation. He continued that China opposes any form of illegal unilateral sanctions and urges relevant parties not to undermine its legitimate rights and interests.

Zhao then criticized the disinformation disseminated by the U.S. regarding China’s stance on the Russia-Ukraine conflict, and comments by White House press secretary Jen Psaki, who said China will face “significant consequences” if it helps Russia evade the sanctions imposed by the U.S. and its European partners.

Zhao made the remarks in response to Russian Foreign Minister Sergei Lavrov’s claims that there are hundreds of military biological laboratories, including almost 30 just in Ukraine alone. And many were set up in a number of former Soviet countries precisely along the perimeter of Russia’s borders, as well as on China’s borders, and on the borders of the other countries located there, posing life-threatening dangers to a huge number of civilians.

We welcome the joint assessment by the international community of the documents disclosed by Russia under the framework of the Biological Weapons Convention (BWC) and the United Nations, and we also welcome clarifications from the U.S. side, Zhao said.

It also will be an opportunity for the international community to restart the negotiation for a protocol that includes a verification mechanism to strengthen the BWC, he added.

“This will help restore the international community’s confidence in the U.S. fulfillment of its international obligations and strengthen global biosecurity,” he said.

Resonance of Imran’s audio leak on horse trading to increase every day: Marriyum