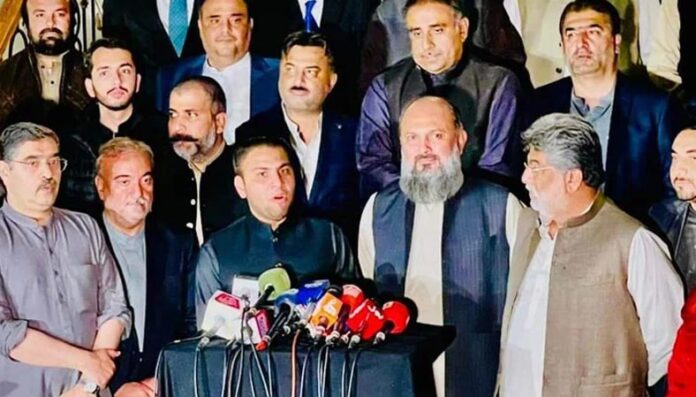 The Balochistan Awami Party’s (BAP) lawmakers in the Khyber Pakhtunkhwa (KP) Assembly have decided to separate themselves from the government because of “unfulfilled commitments”.

BAP MPA Bilawal Afridi confirmed the development on Wednesday in a video sent to the media, saying that in the coming days, his party would take decisions that would benefit the people of their constituencies and Khyber Pakhtunkhwa.

Afridi decried that the government had failed to live up to its promises of issuing funds worth Rs110 billion under the National Finance Commission Award for the districts merged with KP and giving jobs to the people in tribal areas.

“We are not involved in any discussion when meetings are held on newly merged districts and funds utilisation has been happening on the instructions of two to three people. No [assembly] members from tribal districts are taken on board in any meetings and this is unfair,” he said, adding that for these reasons, BAP lawmakers in the KP Assembly were breaking ranks with the government.

BAP has four lawmakers in the KP Assembly, including Afridi. He, and two others, namely Abbasur Rehman and Shafiq Afridi, were elected as MPAs during the 2019 polls in newly merged districts. They had contested the elections as independent candidates and later joined the BAP.

The one remaining BAP lawmaker, Baserat Khan, was elected on a reserved seat for women.

The development comes amid shifting political alliances in the country as the government and opposition take measures to ensure the support of Pakistan Tehreek-i-Insaf allies ahead of voting on a no-confidence motion against Prime Minister Imran Khan.

Earlier this week, PM Imran had visited Parliament Lodges for the first time after coming to power in 2018 and held meetings with leaders of the PTI’s allied parties — the BAP and Grand Democratic Alliance — in an apparent attempt to woo them.

During that meeting, BAP leaders had expressed reservations on a number of issues and asked the prime minister not to resort to the “politics of confrontation” as well as call off his party’s power show on March 27.

BAP leader Khalid Magsi stated that after the meeting said that they had discussed reservations and problems with the prime minister.

“We have presented to the PM our reservations and problems that we have faced during the last three-and-a-half years and urged him not to go for a public meeting on March 27 because it can trigger bloody politics and chaos in the country,” Magsi had said.

He said he had informed the premier that the PTI had never backed the BAP in crucial times when the party split into two groups in Balochistan and that no practical steps were taken for the development of the neglected province.

Magsi had said the BAP had spent more than three years with the PTI-led ruling alliance.

“Now we are looking towards the opposition what options it will give for the betterment of Balochistan,” he had said.

The BAP leader had also conceded that they were also observing the behaviour of the Chaudhrys of Gujrat (PML-Q leaders) in the political scenario.

“So we are watching everything and we will soon take our decision whether to stick to the ruling alliance or quit it,” he had added.