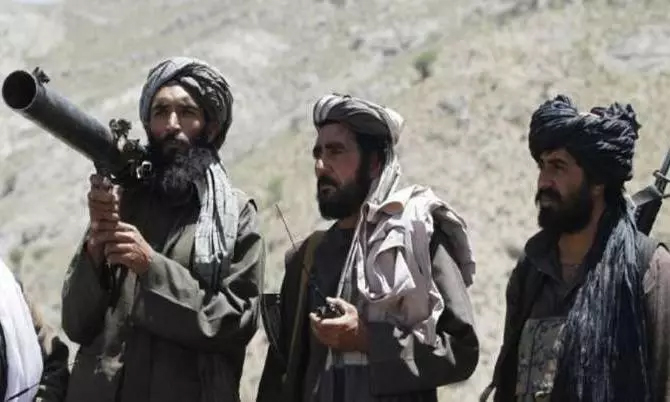 “Don’t worry, everything would be okay”; were the words of Pakistan’s former spy chief as he graciously held a saucer with a teacup resting on it. The statement was made just days after the Taliban had marched into Kabul and the last US General had raced towards the final US plane bidding the allied force’s farewell to a country that had just put soil over another grave of an empire.

Around six months have passed since then, but are things really okay? I think the answer to this query is as obvious as India’s involvement in terror activities within Pakistan. Afghans are dying for bread with the state machinery and its finances imperceptible. Unfortunately, it is not only Afghanistan that is suffering but its immediate neighbour with which it shares a 1,640 miles long border is too, though not on humanitarian grounds but that of security. Lack of bread (that undoubtedly is a greater issue, that should be resolved through the restoration of aid) is replaced with growing radicalization and attacks in the case of Pakistan, especially by  the TTP, with the most recent on 31st December that resulted in the martyrdom of four soldiers in Northwest Pakistan.

Diplomacy never works by taking firm sides; “learning, unlearning, and relearning” each day with changing contexts is the need of this hour, a skillset Pakistan lacks as it is deeply caught-up in obstinate patterns of the past. Thus, everything was not supposed to be “okay” in September too, we shall see how “everything unfolds” might have been a better expression. Yet internally, I do hope everything turns alright which is only possible if Pakistan becomes more pragmatic in its approach

High hopes, however, were attached with the Taliban (owing to Pakistan’s unconditional support to them both during and especially after US’s and allied force’s presence in Afghanistan), all of which are seemingly shattered after the Taliban’s refusal to decisively act against TTP and their implicit support for them that in return ensures TTP’s assistance in their fight against Daesh. Their positioning is quite realistic considering their old linkages with some factions of TTP, and their exposure to enormous economic and societal challenges limiting them from opening another battle-front (where one already is open against Daesh). Thus, it is in no way favourable for the Taliban to religiously stand by Pakistan’s stance (of taking action against TTP), just as it was not for Pakistan (unintendedly or intendedly) to save the Taliban regime and secure its ambassador in Pakistan from being taken to rot inside the in-famous Guantanamo Bay prison in 2002. So, it is not the Taliban that has wronged Pakistan but the unreal expectations that Pakistan has.

As a state (less Bhutto’s era of non-alignment), Pakistan has rarely been able to delicately balance its relationships, barring the exception of the Middle East where Pakistan has done relatively well. Since an absolutist stance is easier than balancing, requiring less effort, Pakistan usually is inclined towards the former (modeling its bureaucratic environments) as is visible today in its partnership with China at the cost of the USA.

The PMin none of his (countless) interviews mentions the gross rights abuses against Muslims in Xinjiang, while he is quick to point towards Islamophobia perpetrated in the West and strike one of the most “un-diplomatic” terms “absolutely not” which portrays Pakistan’s assertive credence for China. This positioning was uncovered further when Pakistan refused to join in on a democracy summit chaired by the USA (in which China was uninvited) signaling Pakistan’s absolutist stance in favour of China that mostly results in the kind of despair received from the Taliban recently!

Adam Grant, in his latest book, Think Again, points to the most valuable skills needed for an individual’s survival in today’s world; “learning, unlearning and relearning”. Similar skills need to be embedded within Pakistan’s foreign policy process to break away from the cycle of investing in one actor and subsequently being disappointed (such as, in the case of backing the USA during the 1990s but then despising them for abandoning it).

Similar is the case of the Taliban today who are now walking away from pledges made with Pakistan, portraying a patten in our foreign policymaking and I fear (hoping I am wrong) that China might be next on the list of unreliable allies after the Taliban. Thus, Pakistan’s foreign policy approach is synonymous with those firefighters (in Grant’s book) who died while carrying their safety tools as they ran against the rising forest fire to save themselves. Only if they would have taken those tools off, Grant contends, they would have been alive! But habits and self-identification (i.e., that of a firefighter with his safety tools) are hard to let go of even when they become toxic like Pakistan’s self-identification of being friends with the Taliban, or China, or for that reason the US in the past.

Yet, it is never too late, and I hope lessons are learned, and Pakistan’s policy approach turns more pragmatic and less static in the aftermath of the Taliban’s episode. Just like those safety tools, Pakistan should have known when to break contact with the Taliban, for them to early realize the consequence of not listening, but we were seemingly occupied with celebrating the victory of our Pashtun brothers.

We do have the luxury of hindsight today, yet, only if Pakistan was less enthusiastic and more realistic in August, the Taliban would not have taken Pakistan’s word lightly and some action (if not decisive) against the TTP for instance in the form of allowing Pakistan to covertly attack TTP would have been possible rather than the provisioning of apparent “good-offices” for negotiations that further emboldened the TTP.

The PM must also be more cautious about about making over-simplistic statements on international and national television which imply Pakistan is on one camp over the other as they make the job of his well-versed NSA, Moeed Yusuf, harder when he in contrast pursues to portray Pakistan’s “neutrality” which already implies partial Anton’s syndrome (of denying blindness with hard evidence indicating otherwise) in the light of Pakistan’s actions emptying his studio words. He cannot afford to be further contradicted by his own boss.

Diplomacy never works by taking firm sides; “learning, unlearning, and relearning” each day with changing contexts is the need of this hour, a skillset Pakistan lacks as it is deeply caught-up in obstinate patterns of the past. Thus, everything was not supposed to be “okay” in September too, we shall see how “everything unfolds” might have been a better expression. Yet internally, I do hope everything turns alright which is only possible if Pakistan becomes more pragmatic in its approach. A Pakistani poet, Abbas Tabish, explains the dilemma better than I in the following words:

(We are those swans sitting on dried lakes,
Who die in the pursuit of maintaining relations).