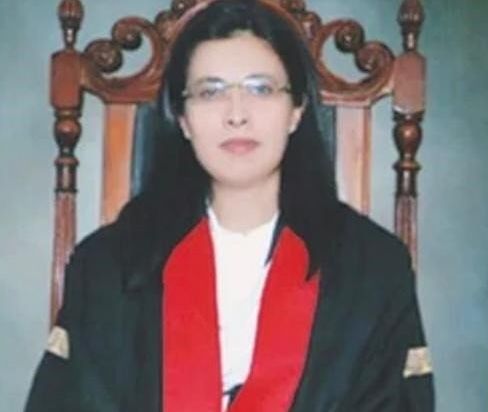 As per a notification issued by the law ministry, her appointment has been approved by President Alvi.

The notification further stated that her appointment will come into effect as soon as she takes oath of office.

“In exercise of powers conferred by clause (1) of article 177 of the Constitution of the Islamic Republic of Pakistan, the president is pleased to appoint Mrs Ayesha A. Malik, a judge of the Lahore High Court, […] as a judge of the Supreme Court of Pakistan with effect from the date she takes oath of her office,” the notification read.

It is pertinent to note that the development comes two days after the Parlia­­mentary Committee on the Appointment of Superior Judiciary approved the appointment of Justice Malik as a judge of the SC.

Justice Malik’s elevation to the SC was debated for month, as many said it went against the principle of seniority since she is the fourth most senior judge of the LHC. Those in favour of her elevation pointed out that seniority was not a requirement for appointment to the apex court according to the Constitution and that the country’s judicial history is full of instances of male judges from provincial high courts being elevated without consideration to seniority.

After the parliamentary committee approved her appointment, Senator Farooq H. Naek, who heads the body, had said the committee still believed in the principle of seniority for appointment of judges, but the approval for Justice Malik was given because it was the first time a woman was being elevated to the apex court.

“We have approved Justice Malik’s name in national interest,” the senator had said.

The Judicial Commission of Pakistan (JCP) had earlier this month approved Justice Malik for elevation to the apex court by a majority of five to four during a heated session that had lasted nearly three-and-a-half hours.

This was the second time that the JCP held a meeting to decide on Justice Malik’s appointment. A lack of consensus during an extended meeting of the JCP on Sept 9 last year had forced the commission to defer a decision on her appointment.

Earlier, during the JCP’s Sep 9 meeting, four members of the commission had opposed the proposal to elevate her, while an equal number supported it.

The Supreme Court Bar Association President Abdul Latif Afridi had called a countrywide protest to express anger over disregard to the seniority principle in the appointment of judges to the apex court.

While the JCP was holding its session, lawyers had arranged a protest and convention in a nearby office of the Supreme Court Bar Association (SCBA). They accused the judiciary of favouritism in the appointment of superior court judges and thus harming its image.

Through a resolution, the convention had asked the JCP to adhere to the seniority principle in appointments to the apex court from the provincial high courts until such time as fair, transparent and objective criteria for appointment of judges at all levels were framed in consultation with all stakeholders and appropriate amendments to the Judicial Commission Rules were made.

It merits mention that the same criticism was levelled this time as well, with the legal fraternity calling on the chief justice to postpone the JCP meeting. In case the meeting was not called off, the Pakistan Bar Council (PBC) and all bar associations said they would boycott all court proceedings, from the superior judiciary to the lower courts.

In a related development, LHC Bar Association President Maqsood Buttar had moved a petition before the Supreme Court earlier this month seeking directions that the JCP invite all relevant stakeholders; judges, senior lawyers and bar representatives, members of the parliamentary committee, the federal and provincial governments and civil society and structure the process of judicial appointments to the superior courts to make them more objective and transparent.

The petition had asked that until the criteria was developed, the JCP should stick to the seniority principle in the elevation of high court judges to the Supreme Court.

The petition also sought directions for the JCP to frame comprehensive and detailed rules/guidelines to structure both the process of and parameters for appointment.

It merits mention that Justice Malik completed her early education from schools in Paris and New York and then completed her senior Cambridge from the Karachi Grammar School.

She studied law at the Pakistan College of Law in Lahore and went on to do her LLM from the Harvard Law School Cambridge, Massachusetts, USA, where she was named a London H Gammon fellow 1998-1999.

From 2001 to the date of her elevation as a high court judge, she worked with the law firm of Rizvi, Isa, Afridi and Angell, first as a senior associate and then a partner in charge of the firm’s Lahore office.

She is an author of a number of publications and has taught banking law at University of the Punjab and mercantile law at the College of Accounting and Management Sciences Karachi.

Justice Malik has also appeared as a pro-bono counsel for several NGOs working on poverty alleviation, microfinance and skills-training programmes.