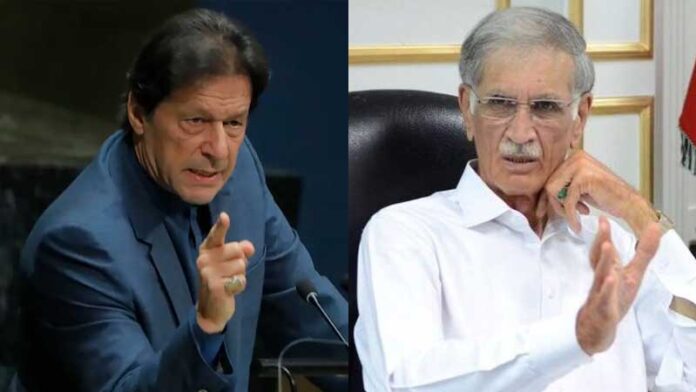 Federal Minister for Defence Pervez Khattak on Thursday criticised Prime Minister Imran Khan and Energy Minister Hammad Azhar over gas crisis in Pakistan, especially in Khyber Pakhtunkhwa, during the parliamentary party meeting of the PTI and its allies before a key vote on the Finance (Supplementary) Bill 2021, according to media reports.

“Hammad Azhar has no knowledge of gas and electricity crisis,” Khattak reportedly said in the meeting.

The defence minister said that Khyber Pakhtunkhwa province produces electricity and gas but is still facing a shortage.

“It is us who got you elected as prime minister,” he reportedly told Imran Khan.

He also criticised Finance Minister Shaukat Tarin. “We have to face tough questions of the public as they [people] voted us and we are answerable to them,” he said, adding that ministers like Tarin are not answerable to people as he is not a representative elected by people.

Imran Khan hit back by saying he would not be blackmailed.

“If you continue to blackmail me in front of everyone, I would invite the opposition to come and rule the country,” Khan reportedly said.

Later, while speaking to journalists outside the meeting room, Khattak denied that he had an altercation with “anyone”. However, he said that he had just demanded his rights.

“I only talked about my rights.”

He also rejected the reports that he had threatened to vote against the party. “Imran Khan is my leader and I cannot think against him,” he said.

He said he had only raised questions regarding the gas issue in KP.

He requested the media to stop creating a mountain out of a molehill, adding that “this is our internal matter and I am not against Prime Minister Imran Khan.”