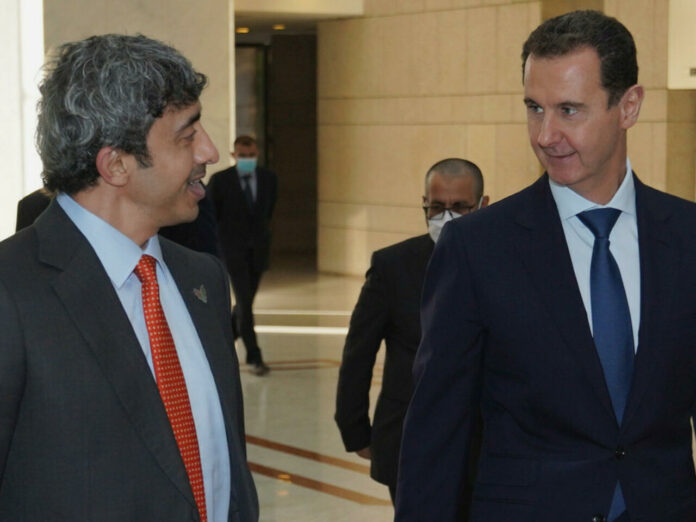 DUBAI: The United Arab Emirates foreign minister met Syrian President Bashar al-Assad in Damascus Tuesday in a sign of improving ties between Assad and a US-allied Gulf state, triggering US denunciations of efforts to rehabilitate a “brutal dictator.”

Foreign Minister Sheikh Abdullah bin Zayed al-Nahyan is the most senior Emirati dignitary to visit Syria in the decade since the eruption of a civil war in which several Arab states backed mainly Sunni Muslim insurgents against Assad.

The visit is widely seen as a sign of regional efforts to end Assad’s diplomatic isolation as Syria grapples with a spiralling economic crisis caused by years of conflict and compounded by Western sanctions.

“They discussed bilateral relations between the two brotherly countries and ways to develop cooperation in different sectors that are of common interest,” it added.

He also stressed the “UAE’s support for all efforts made to end the Syrian crisis, consolidate stability in the country, and meet the aspirations of the brotherly Syrian people,” WAM reported.

US slams expression of ‘support’

But the UAE’s ally Washington quickly expressed concern over the signal sent by the encounter.

“This administration will not express any support for efforts to normalise or rehabilitate Bashar al-Assad, who is a brutal dictator,” State Department spokesman Ned Price told reporters, not referring to him as president.

The UAE severed relations as Syria’s repression of nationwide protests demanding regime change was escalating into a devastating war that has since left nearly half a million people dead.

Syria is backed by the Gulf state’s regional rival Iran, but in December 2018 the UAE reopened its embassy in Damascus, suggesting an effort to bring the Syrian government back into the Arab fold.

The move was followed by the UAE’s calling in March this year for Syria to return to the Arab League — having been a key backer of its suspension in November 2011.

Back to the ‘Arab fold’

Egypt, home of the pan-Arab body, said Tuesday that relations should eventually be restored with Syria but that Damascus needed to first address concerns such as the humanitarian effects of the war.

Addressing the Woodrow Wilson International Center for Scholars in Washington, Egypt’s Foreign Minister Sameh Shoukry said that Syria needed to “show greater moderation in how it regains the trust of both the region and in its own internal dynamics”.

Damascus is struggling to secure international aid, namely from oil-rich Arab regional neighbours that supported the opposition in the early days of the war.

A ministry statement said the UAE was Syria’s most prominent global trade partner, with a 14 percent share of Syria’s foreign trade.

Analyst Nicholas Heras of Newlines Institute in Washington said that the “UAE is Assad’s lifeline” in light of crippling Western sanctions.

The UAE is not the only Arab country moving closer to Assad’s government.

In October, Assad called King Abdullah II of Jordan for the first time since the start of Syria’s conflict.

The UAE is one of the six Gulf Cooperation Council member states that took a tough stance against Damascus in 2012 and eventually recognised an opposition umbrella group as the representative of Syria.

Some regional powers see warming up to Damascus as a way of luring Syria away from the exclusive regional influence of Iran — a staunch supporter of Assad’s government that has expanded its military footprint in Syria throughout the course of the conflict.