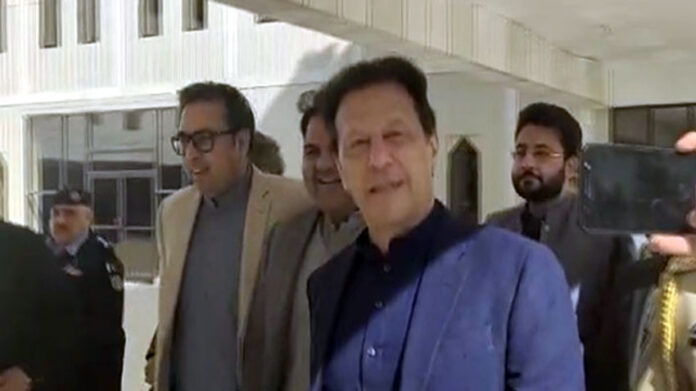 ISLAMABAD: Prime Minister Imran Khan on Wednesday appeared before the Supreme Court where he remarked that there are “no sacred cows” in Pakistan and that he firmly believes in the rule of law.

The prime minister also told the court the government will take action on whatever orders are given to it by the court.

The prime minister was summoned by Chief Justice Gulzar Ahmed in a suo motu case pertaining to the 2014 Army Public School massacre in Peshawar.

In a plea to the SC, the parents of the children demanded that the top leadership of the country be nominated in the case and a transparent probe be conducted into the incident.

The court had asked Attorney General Khalid Jawed Khan to review the situation and take necessary steps — whether it be an investigation or filing cases against those responsible — and inform the court.

At the time of the incident PTI was the ruling provincial government, whereas PML-N was at the Centre.

Justice Ijaz ul Ahsan, part of the bench reviewing the case, said it is important to satisfy the parents who had lost their children to such a barbaric act.

“The parents demand that the leadership of the time be prosecuted,” he said.

In response, the prime minister acknowledged that when the massacre took place, his party was in power in Khyber Pakhtunkhwa. The prime minister said he had met the parents, who were paralysed with grief, in hospitals.

“We took whatever remedial measures we could at the time,” said the prime minister.

At this, the chief justice told the prime minister that the parents of the victims were not seeking compensation from the government. “The parents are demanding to know where the entire security apparatus was [that day]?” he said.

“Despite our clear orders, nothing was done,” the chief justice observed.

The prime minister told the chief justice that the National Action Plan was formulated after the APS massacre, and that the “war against terrorism was won”.

“There were bomb blasts taking place every single day at the time,” the premier said.

“Find out why 80,000 people were killed,” said PM Imran Khan. “Also find out who is responsible for 480 drone attacks taking place in Pakistan.”

The prime minister told the chief justice that the government was pained at the loss of precious lives in the APS attack, adding that it also felt the pain of 80,000 people that had been killed [in the war on terror].

“You can constitute a high-level commission on the APS tragedy,” said the prime minister.

“We have already formed a commission and it has issued a report as well,” responded the chief justice. “Our order of October 20 states clearly that the government should find out who is responsible for the massacre and take action against them,” he added.

The chief justice reminded the prime minister that seven years had passed since the tragedy took place.

Justice Qazi Muhammad Amin Ahmed, speaking to Prime Minister Imran Khan, said: “You have brought the culprits to the negotiating table. Are we once again about to sign a surrender document?”

He was referring to a ceasefire agreement reached by the government with the banned Tehreek-e-Taliban Pakistan (TTP) — the militant group behind the attack.

The Supreme Court said the government should pay heed to the demands made by the parents and take action against the culprits.

The prime minister assured the court that the government will see to it that justice is delivered. The apex court directed the prime minister to ensure implementation of its October 20 verdict.

The hearing was adjourned for four weeks.

Earlier today, the court had asked the attorney general for an update regarding the registration of the cases, who responded by saying that FIRs cannot be filed against the top officials.

At this, the bench angrily had told the government’s lawyer that the incident had taken place as a result of a “security lapse” which the government should accept, adding that the top civil and military leaders of the time should have known about the attack.

The chief justice then remarked that Pakistan’s agencies and institutions have access to all sorts of information, but when it comes to the security of the people “our security agencies fail”.

While responding to a query, the AGP told the court that the fact-finding report did not hold the former army chief and other senior government functionaries responsible for the attack.

“We have such a huge intelligence network, billions of rupees are spent on it. We also claim to be the best intelligence agency in the world,” the CJP observed.

Justice Ijaz ul Ahsan had said the APS massacre had taken place in response to Operation Zarb-e-Azb, adding that state institutions should have taken effective steps against it.

During the hearing, the attorney general sought time from the court to seek directives from the prime minister and other officials so he can respond to the court.

However, the bench had said this was a very serious case and that it would summon the prime minister and seek answers from him.

The issue of the government holding talks with the banned TTP also came up during the hearing.

Justice Qazi Amin had remarked that there are reports that the government is holding negotiations with a group and added, “Is it not the responsibility of the state to identify the real culprits [behind the APS tragedy] and nab them.”

Meanwhile, CJP Ahmed observed that action should have been taken against those at the top but low-level personnel were punished instead.

Justice Aijaz ul Ahsan, another member of the bench, remarked that it was not possible for the terrorists not to have got support from the inside.

Interior Minister Sheikh Rasheed appeared outside the Supreme Court before the prime minister arrived, to speak to the media.

The minister said that “no game is being played, the game belongs to Imran Khan”.

“There is no danger, Imran Khan will fulfil his five-year term,” he added.

Responding to a question, the minister said he had arrived at the apex court “to accompany the prime minister if he appears”, adding that he did not know whether PM Imran Khan will show up or not.

He refused to comment on the hearing, saying that the law minister or the attorney general were better qualified to speak on the matter.

“The Ministry of Interior does not have the solution to every problem,” he said

Earlier, while questioning the “inaction” against the perpetrators of the gruesome 2014 attack on the Army Public School in Peshawar, the Supreme Court ordered the government to submit within four weeks a report detailing measures taken to address the complaints of the parents of victims of the massacre, Radio Pakistan reported.

In the attack that provoked horror and fierce international condemnation, members of the proscribed Tehreek-e-Taliban Pakistan (TTP), wearing suicide vests, stormed the facility on December 16, slaughtering 147 people, 132 of them children.

The report must carry the signatures of Prime Minister Imran Khan, the court further said.

The three-judge bench passed the order in a hearing attended by the prime minister after the chief justice ordered him to appear before the court.

The proceedings started at 9:00 am. Shortly after, the bench — headed by Chief Justice Gulzar Ahmed, and comprising Justice Qazi Muhammad Amin Ahmed and Justice Ijaz ul-Ahsan — ordered Khan to appear in person at 10:00 am.

He, however, arrived about two hours later, just before noon, after receiving a briefing on the case from Attorney General Khalid Jawed Khan who called on him at his office following the court order.

The hearing resumed with the prime minister present in the courtroom along with a number of lawyers, security personnel and families of victims.

Members of the cabinet including Minister for Interior Sheikh Rasheed Ahmed and Minister for Information and Broadcast Fawad Chaudhry, who is also a barrister, were also present.

The order came after years of protests by relatives of the victims. The families are also protesting the government’s recent efforts to strike a peace deal with the group.

Wednesday’s proceedings followed the announcement of a one-month “complete ceasefire” between the government and the Afghanistan-based militant group which may be extended if both sides agree, opening the possibility of a fuller peace accord after years of bloodshed.

The rumours of proposed amnesty to the TTP to ensure lasting peace elicited a protest in October when the parents of the students killed by its members rejected the measure and warned to continue protest demonstrations if the Afghanistan-based group was given amnesty.

They said the government could, however, announce conditional amnesty for TTP fighters if they gave up their militant activities and surrender.

“If the political leadership rejected the agreement, the military would revert to kinetic actions against the TTP,” a report said, citing sources.

Reuters reported the two sides have been meeting across the border in Afghanistan, with the aid of Afghan Taliban leaders.

Today, addressing the prime minister, Justice Ahmed said: “You are in power. The government is also yours. What did you do? […] You brought those guilty [TTP] to the negotiating table.”

He was referring to the reports of the agreement between the government and TTP militants.

Prime Minister Khan told the Supreme Court his government will initiate action against elements the top judicial forum ordered and affirmed there were “no sacred cows” in Pakistan.

“The satisfaction of the parents [of children killed in the APS attack] is necessary,” said Justice Ahsan addressing Khan.

February 7, 2023
ISLAMABAD: Marriyum Aurangzeb, the information minister, Tuesday announced the government has postponed for a second time a multi-party conference convened to discuss the resurgence...