‘A spoiler can’t be a peacemaker’: Moeed Yusuf refuses to attend Indian moot on Afghanistan 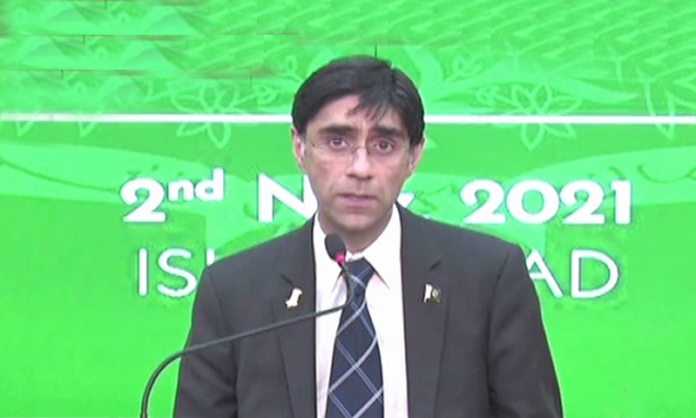 National Security Adviser (NSA) Moeed Yusuf on Tuesday categorically said that he would not attend an upcoming moot on the Afghanistan issue hosted by India.

The NSA was addressing a news conference in Islamabad after Pakistan and Uzbekistan signed a Protocol on the Establishment of Joint Security Commission that was followed by the inaugural session of the commission.

According to the reports, regional countries including China, Pakistan, Iran, Russia, Tajikistan and Uzbekistan have been invited to the meeting which is expected to be held in New Delhi on November 10.

“I will not go, a spoiler can’t be a peacemaker,” Yusuf said in response to a question by a reporter about whether Pakistan will be attending.

The NSA regretted the international community’s silence over human rights violations and Indian state-sponsored terrorism in occupied Kashmir, and New Delhi’s expansionist vision which was leading the region nowhere.

Questioned on what hurdles Pakistan was facing in the region to achieve peace and progress, the NSA said: “I think the region’s obstacles are in front of you, there is no need for debate on this. On one hand is India […] unfortunately [because of] the government’s behaviour and ideology there, I don’t see how this [peace] process will move forward — not just for Pakistan but the region.”

He said all regions needed to be concerned if a major country started going down a similar path as India. “The world has unfortunately kept its eyes closed and isn’t talking to India as it should.”

The NSA also pointed out an “opportunity” instead of an obstacle, saying that if peace was established in Afghanistan then it could become a major hub as a corridor of connectivity.

The NSA was also questioned about the comments of the China-Pakistan Economic Corridor Authority czar Khalid Mansoor who last month alleged that the United States was trying to derail the project.

Yusuf said he had talked to Mansoor himself on the matter and “we confirmed that he was quoted completely out of context.”

He said that he had a “clear stance” that the world would do what it wanted but Pakistan needed to ensure that its targets were met, any weaknesses were removed and strengths were further worked upon.

Yusuf also said that that Western countries may have the luxury to disengage from Afghanistan but Pakistan did not have that option.

The NSA said that Pakistan was criticised sometimes for being proactive in promoting engagement with Afghanistan. Explaining the rationale behind the stance, Yusuf said: “It may be a luxury for the Western world sitting 10,000 miles away [to not bother about Afghanistan] but we do not have any option to disengage from Afghanistan.”

Yusuf said the world needed to coordinate and constructively engage with the present Afghan government to avert a humanitarian crisis for the sake of the country’s people — warning that a worse situation might develop if this was not done.

“This is not a matter of the Taliban or some other government but of the ordinary Afghan [citizens].”

He said that Afghanistan was in a state of war for four decades and its direct impact had been felt by Pakistan in lives lost, economic losses and rise in terrorism.

“It is our right as Pakistan to remind the world about this,” the NSA said.

He reiterated that engagement with Afghanistan was not a political matter for Pakistan but a “humanitarian one and a matter of our national security”.

Yusuf said Uzbekistan shared the same stance with Pakistan on the war-torn country and there was a long discussion on the issue in today’s meeting.

Regarding the details of the newly set up commission and what issues were discussed, Yusuf said it encompassed matters ranging from transnational crime, drug trafficking, cooperation against terrorism and mutual capacity building in areas such as disaster management.

He said the issues would be further developed in the form of working groups and previous existing agreements would also be “revitalised” and taken forward in the same way.

The NSA lamented that Pakistan had perhaps not benefitted from its geographical position in the past as it should have but now under the government’s geo-economic paradigm, the process of connectivity via Pakistan was important.

He said the Central Asian states would be a “crucial element” in the future for fulfilling Pakistan’s geo-economic vision, adding that Uzbekistan, in particular, had a “critical role” to play.

A press release issued by the National Security Division said that Yusuf met with Secretary of the Security Council of the Republic of Uzbekistan Lieutenant General Victor Makhmudov who is on a three-day visit to Pakistan.

Regarding the signed protocol, the press release said that it “covered wide-ranging security related [to] matters of mutual interest and established [a] coordination mechanism between Pakistan’s National Security Division and the Security Council of Uzbekistan”.

“During the inaugural session, both sides discussed various aspects of the newly formed joint commission and the way forward for making the commission effective and mutually beneficial,” the press release reads.

Yusuf said Central Asia was a priority for Pakistan since tapping into the region would open up access and allow it to benefit from the bloc’s markets and energy reserves.