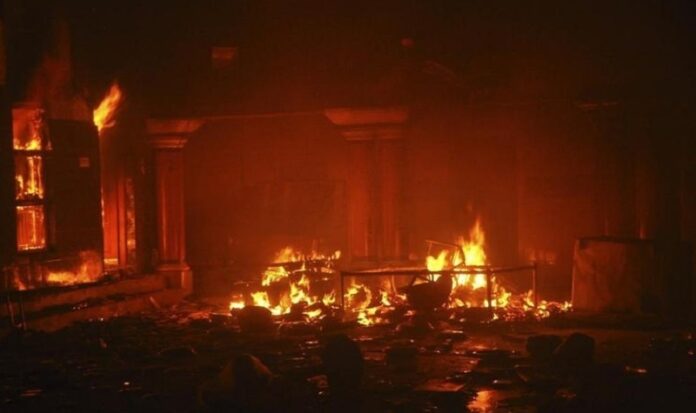 MUZAFFARGARH: Seven people were burnt to death in a house fire in Muzaffargarh’s Pir Jahanian area on Sunday.

According to sources, the dead included a man, two women and four children. The childrens ages were ranged from 18 years to two months. Their bodies have been shifted to a hospital.

The police said that according to heirs, Mehboob and Fauzia Bibi, both residents of the house, had contracted a free will marriage 18 months ago.

They alleged that the fire was an act of arson committed by Mehboob’s in-laws. Evidence has been gathered from the scene, including an empty bottle of petrol.

A case will be registered after the post-mortem of the bodies.

Earlier this month a newly married man, Nauman, who had contracted a love marriage, was kidnapped by members of the girl stormed the judicial complex Jheka Gali from the court premises in Murree after he along with his bride showed up for the court hearing, seeking the quashment on an FIR, lodged by the girl’s family.

The police had foiled their attempt to kidnap the girl.

The couple had solemnised a freewill marriage, however, the girl’s family was against it and had lodged a kidnapping case.

The Murree police recovered the abducted man and arrested 10 persons on kidnapping charges.

LAHORE: The Provincial Development Working Party (PDWP) approved the development scheme of the industries sector with an estimated cost of Rs4,107 million. The scheme was...
Read more
CITY