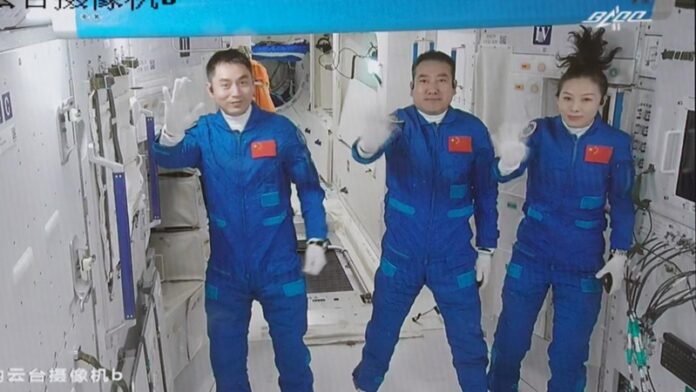 The three astronauts are Zhai Zhigang, the commander and China’s first spacewalker, Wang Yaping, the first female on board China’s space station, and Ye Guangfu, a newcomer to space, who were given a send-off from the Jiuquan Satellite Launch Center in northwest China on Oct. 15, 2021.

They will stay in orbit for six months, setting a new record for China’s crewed space mission duration. The current three-month record was kept by the Shenzhou-12 crew from June to September this year.

The Shenzhou-13 spaceship, atop a Long March-2F carrier rocket, was launched from the Jiuquan Satellite Launch Center in northwest China’s Gobi Desert at 12:23 a.m. (Beijing Time) on Saturday, according to the China Manned Space Agency (CMSA).

About 582 seconds after the launch, Shenzhou-13 separated from the rocket and entered its designated orbit. The crew members are in good shape and the launch is a complete success, the CMSA declared.

It is the 21st flight mission since the country’s manned space program was approved and initiated, and the second crewed mission for China’s space station project.

At 6:56 a.m., the spaceship completed the orbital status setting after entering the orbit and conducted a fast automated rendezvous and docking with the radial port of the Tianhe core module, forming a complex together with the cargo crafts Tianzhou-2 and Tianzhou-3. The whole process took approximately 6.5 hours.

After a series of preparations, Zhai Zhigang opened the hatch of Tianhe. At 9:58 a.m., Zhai Zhigang, Wang Yaping and Ye Guangfu entered the core module one by one.

The mission will test key technologies for assembly and construction of China’s space station, such as module transfer supported by the robotic arm and manual remote operation, according to Lin Xiqiang, deputy director of the CMSA, earlier at a press conference held at the Jiuquan Satellite Launch Center.

The astronauts will perform two or three extravehicular activities (EVAs) during the mission to install the dual-arm connector, the device to link the big and small mechanical arms, as well as the suspension device, Lin said.

Wang Yaping will be the first Chinese female astronaut to participate in the EVAs.

The mission will further verify the health, living and working support technologies for astronauts’ six-month stay in orbit, he said.

The astronauts will also carry out sci-tech experiments and applications in fields such as space medicine and micro-gravity physics, as well as diversified public science education activities, he said.

The mission will achieve a comprehensive assessment of the functional performance of various project systems for carrying out space station tasks and the compatibility between systems, he added.