The government has presented a dossier exposing India 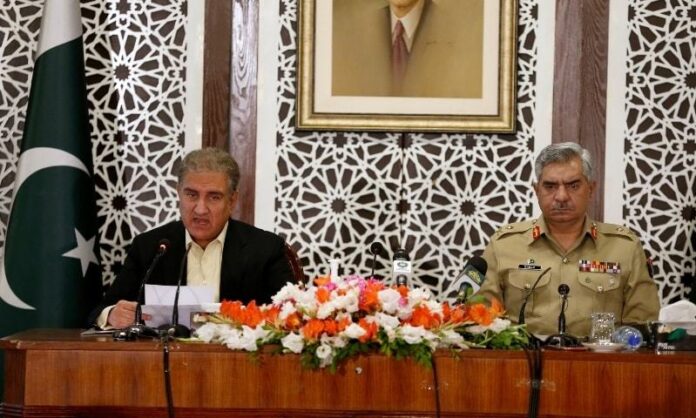 In the back-drop of the death of APHC leader Syed Ali Geelani, an icon of the freedom movement in Indian-Occupied Kashmir, and the inhuman action of the occupation forces in snatching his dead body from his family and burying it under their own supervision, the decision by Pakistan to release a dossier proving how India was violating all international and humanitarian laws in Indian-Occupied Kashmir, is a timely and prudent move to shake the conscience of the so-called civilized world.

Foreign minister Shah Mahmood Qureshi, addressing a joint press conference along with Minister for Human rights Dr Shireen Mazari and National Security Advisor Moeed Yousaf last week, revealed that a 131-page dossier comprising details of war crimes by the Indian army and its genocidal actions, resurgence in local resistance exposing Indian claims of normalcy in the state and how India was flouting UNSC resolutions, international laws, humanitarian laws and the 4th Geneva Convention, has been sent to the international community. The dossier relies on references from international and Indian media as well as global human rights organizations such as Amnesty International and Human Rights Watch.

It is in India’s own long-term interest to fulfill its obligations under the UN resolutions. It is therefore desirable that it should pay heed to the demands made by Pakistan including actions against perpetrators of oppression as pointed out in the dossier, rescinding measures designed to change demographic realities, ending the military and digital siege, release of all political prisoners, allowing unhindered access to Indian-Occupied Kashmir to the UN and the independent permanent human rights commission of the OIC, independent journalists, human rights and civil society organizations

The most worrying revelation was regarding running of five training camps for the militant Islamic State at Gulmarg, Rajpur, Jodhpour, Chakrata, Anupgarh and Bikaner. It is feared that by injecting these state-trained fighters, India might try to

establish linkages of freedom movement and to justify its own crimes as counter-terrorist operations. It is pertinent to point out that UN in a recently released report had claimed the presence of IS terrorist in Kerala and Karnatka.

India is presently ruled by a fascist regime inspired by RSS ideology of ‘Hindutva’ akin to Nazism. It can go to any extent to achieve its designs, such as the self-sponsored Pulwama incident to use it as an excuse for action against Pakistan merely to win elections. It was a ranting testimony to the hate-ridden mentality of the Indian rulers. The induction of IS terrorists may well be a tactic to malign the freedom struggle as contended by the foreign minister.

The Indian security forces have killed more than 95,000 Kashmiris, raped thousands of women and destroyed innumerable structures since the beginning for the freedom movement in 1989, in an effort to subdue the movement by terrorizing the local people. Amnesty International and Human Rights Watch have been regularly compiling reports about blatant violation of human rights and even demanding repeal of the Armed Forces Special Powers Act,  1990  which gives

The Modi government since its advent has upped the ante by pursuing communal policies within India, particularly targeting Muslims and also by scrapping special status of Indian-Occupied Kashmir, its bifurcation into two territories and its annexation to the Indian Union, followed by the promulgation of new domicile law to change demographic realities in the state. All these actions are a blatant violation of UNSC resolutions, international law and fourth Geneva Convention.

advantage of their partnership, India has also been bandying around the narrative of Pakistan sponsoring cross-border terrorism. It found takers of that narrative in her strategic partners like USA which instead of heeding to state-terrorism by India has been putting pressure on Pakistan with regard to Mumbai and other incidents of terrorism within India.

Pakistan had also presented a dossier to UN and major world capitals in the backdrop of the arrest of Kalbhushan Jhadav who confessed supporting and fomenting insurgency in Blochistan and sponsoring acts of terrorism within Pakistan. The dossier also contained collaboration between RAW and Afghan intelligence DNS to sponsor acts of terrorism on Pakistan soil through TTP. It all became a victim of global politics.

Since 5 August 2019, the people of Indian-Occupied Kashmir are living in an open prison with curfews, lockdowns and frequent closure of means of communication. The India security forces continue with their killing spree through cordon and search operations. Not a day goes by when 2-3 youth are not killed by them. Thousand have been incarcerated and hundreds have gone missing.

Pakistan’s Prime Minister has been vociferously reminding the world and the UN of their obligations towards the people of Kashmir as enunciated in the UNSC resolutions, the plight of the Kashmiris and the threat that the Indian action of 5 August 2019 pose to peace and security of the region. Thanks to the diplomatic offensive launched by Pakistan to sensitize the world community about illegal actions of the Indian government that the world community did not buy the Indian narrative that the situation in IIOJ&K was its internal matter. The UNSC in its informal meeting also reiterated the relevance of its resolutions on the Kashmir dispute. But no credible move has been made to denounce India and putting pressure on her for the implementation of the UN resolutions. Double standards by the so-called civilized world and apathy by UN are actually encouraging India to continue treading a dangerous path.

India leaders must realize that it would not be possible for them to subdue the freedom movement in Indian-Occupied Kashmir through the barrel of a gun. The people of Kashmir have proved beyond an iota of doubt that they are not deterred by the Indian atrocities and would continue their struggle for freedom till its logical end. The legacy left by Geelani would be kept alive. Pakistan would also not allow India to get away with her actions in Indian-Occupied Kashmir. It would continue its support to the people of Kashmir for their right of self-determination.

The Modi government needs to understand that peace and security in the region was not possible without resolution of the Kashmir dispute. It is in India’s own long-term interest to fulfill its obligations under the UN resolutions. It is therefore desirable that it should pay heed to the demands made by Pakistan including actions against perpetrators of oppression as pointed out in the dossier, rescinding measures designed to change demographic realities, ending the military and digital siege, release of all political prisoners, allowing unhindered access to Indian-Occupied Kashmir to the UN and the independent permanent human rights commission of the OIC, independent journalists, human rights and civil society organizations. It was also obligatory on the world community to abandon its duplicitous stance regarding human rights and stop India in her tracks before it was too late. Kashmir admittedly is a nuclear flash-point.