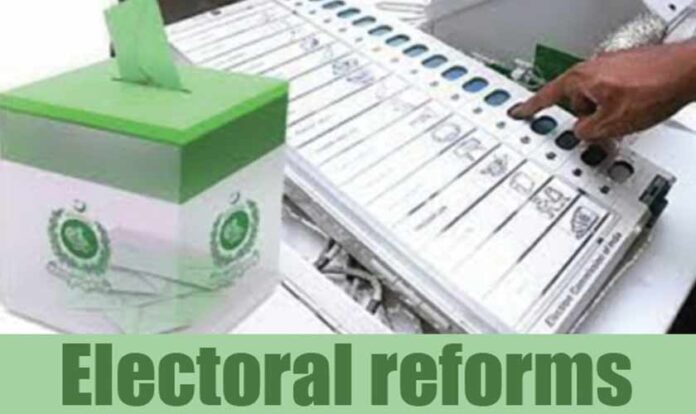 ISLAMABAD: In a major parliamentary breakthrough, the treasury and opposition benches agreed to form a parliamentary committee to work on electoral reforms.

The decision was taken during a meeting between the opposition and government leaders with National Assembly Speaker Asad Qaiser in the chair here at the Parliament House. The meeting was attended by Federal Ministers Shafqat Mahmood and Pervez Khattak while the opposition was represented by Members of National Assembly Syed Naveed Qamar, Murtaza Javed Abbasi, Rana Tanveer Hussain and Shahida Akhtar Ali.

According to rules, the speaker will form a committee in consultation with the National Assembly parliamentary leaders. The committee will review electoral reforms and make recommendations.

The scope of work of the committee shall include but not limited to: (a) evaluating the shortcomings of previous elections and making recommendations for electoral reforms to ensure that elections are held in a free, fair and transparent manner; and (b) drafting legislation, or constitutional amendments, if required, and recommend ways and means to improve the system of elections including adoption of the latest technology available for holding elections.

The committee will present its report to the Parliament within three months from the date of the notification of the committee. The Report may be either interim or final. The report shall: (a) incorporate the views, if any, of the committee members and experts; (b) set forth the recommendations of the committee together with list of participants, and note(s) of dissent, if any; and (c) be signed by the chairman and members.

Opposition rejected formation of committee in past:

A tiff between the opposition and the treasury benches has been a major reason for delay in formation of committee in past. National Assembly Speaker Asad Qaiser in March this year had sent letters to parliamentary leaders of all parties in the house, informing them about a decision taken by him after consultation with Senate Chairman Sadiq Sanjrani about formation of a parliamentary committee to carry out electoral reforms.

Prime Minister Imran Khan had formally asked the NA speaker through a letter to engage the opposition by forming a parliamentary committee on electoral reforms.

In his letter, the prime minister had said that “filthy business of sale-purchase of votes” had been observed in the Senate polls.

However, the matter could not proceed due to the tiff between the opposition and the treasury benches.