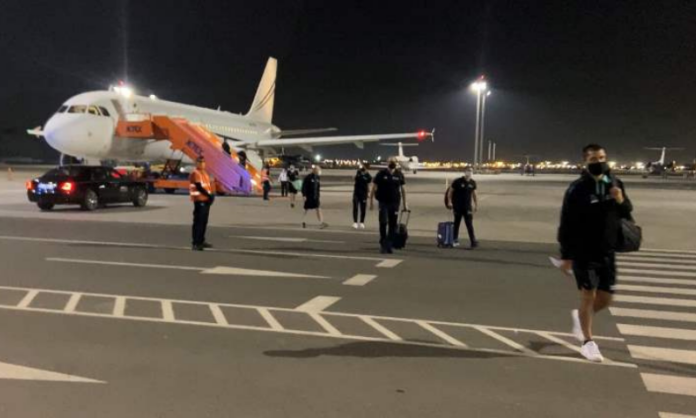 New Zealand was warned of a “specific, credible threat” against its team, the country’s cricket board said on Sunday, elaborating on the rationale for abruptly abandoning the tour of Pakistan as the squad reached Dubai.

New Zealand had pulled out of the limited-overs tour hours before the opening fixture in Rawalpindi on Friday citing a New Zealand government security alert.

In a fresh statement issued by New Zealand Cricket (NZC), White is quoted as reiterating that “while the general tenor of the threat was immediately shared with the PCB, specific details could not, and will not, be disclosed – privately or publicly.”

“We had several conversations with New Zealand government officials before making the decision … unfortunately, given the advice we’d received, there was no way we could stay in the country,” White shared.

The advice to abandon tour was supported by NZC’s security consultants on the ground as well as other independent sources, NZC said.

White, however, said he was “grateful” to the Pakistan Cricket Board (PCB) for helping organise the safe departure of the squad from the country.

“We appreciate this has been a terribly difficult time for the PCB and wish to pass on our sincere thanks to Chief Executive Wasim Khan and his team for their professionalism and care,” the statement quoted him as saying.

The New Zealand team “remained comfortable” with its initial decision to tour Pakistan, the NZC chief said, adding that this was based on comprehensive assessments of the security situation, and the risk mitigation measures promised.

However, “everything changed on Friday,” he said.

“The advice changed, the threat level changed and, as a consequence, we took the only responsible course of action possible,” he iterated.

The squad, comprising 34 players and support staff, flew out of Islamabad on a charter flight. They are now settling into their hotel in Dubai and undergoing a period of self-isolation for 24 hours, according to the statement.

NZC said 24 people from the squad would fly back to New Zealand over the next week as flights and MIQ (managed isolation and quarantine) rooms became available, adding that the rest of the contingent would remain in Dubai and join the T20 World Cup squad for the tournament that is due to start on Oct 17.

Stung by the shock withdrawal, the PCB has threatened to take up the matter with the governing International Cricket Council.

Even Prime Minister Imran Khan’s telephone discussion with New Zealand counterpart Jacinda Ardern could not save the tour and prevent a major blow to Pakistan’s hopes of hosting top international teams.

Prime Minister Ardern said NZC “made the right decision” to pull out of the tour.

“You will understand why we are not in a position to give further information as to the nature of the intelligence, other than to say, it was a direct threat, and it was a credible threat,” she told reporters on Sunday.

The advice was also supported by NZC’s security consultants and other independent sources, the cricket board said.

While the general tenor of the threat was immediately shared with the PCB, White said specific details could not, and will not, be disclosed.

White also addressed a report on Stuff, a New Zealand-based news website, that claimed a member of the team had received death threats before embarking on the tour of Pakistan. He said the email threats were “forwarded to our security provider,” and “were proved to be a hoax and not credible”.

According to the PCB chief executive Wasim Khan, the New Zealand government received an alert from the “Five Eyes” intelligence group about a “direct and imminent” threat to its team.

Speaking to reporters on a virtual call, Khan maintained that the foreign cricket team and government had set a “very wrong example” by unilaterally ending the tour.

Stating that he wished to spread light on the issue, he said that at 3 am on Friday, he received a call from ESI head of security Reg Dickinson, who said that “a report had landed on the New Zealand government’s desk through their government security agencies stating that there was a threat on the New Zealand team, and that threat was direct and imminent on that particular day”.

Khan revealed that he then arrived in Lahore and met Dickinson to seek more clarification.

“He stated that information had emanated from that circle (Five Eyes) and reached the deputy prime minister’s office of New Zealand, and that it was serious and it was something that we needed to try and address immediately,” the PCB chief executive added.

The Five Eyes is an intelligence alliance comprising Australia, Canada, New Zealand, the United Kingdom, and the United States.

Khan said New Zealand refused to provide any details or inform the Pakistani security agencies about the threat, despite being asked for the same.

“When we contacted our security agencies, they clarified that there was no security threat to the visiting team,” he added.

Regretting the Kiwis’ decision, the PCB CEO said “you have to trust the security agencies of the country that you are touring.”

“While harming the relations between the two boards, the decision will have far-reaching consequences,” he said, noting that New Zealand’s players and security officials had expressed confidence over Pakistan’s security arrangements.

“Our players spent the most difficult 14 days in quarantine in New Zealand [and] travelled there despite the [Christchurch] mosque attack. But it is clear to everyone that decisions are not being taken on the basis of equality.”

Khan said Pakistani authorities had made immense efforts to restore international cricket in the country during the last five years, announcing that he and the PCB chairman would raise the matter of New Zealand abandoning the tour in the International Cricket Council.

He revealed that the PCB had contacted the Bangladesh and Sri Lankan cricket boards in the last 24 hours, offering them to arrive in Pakistan to play a bilateral series utilising the arrangements made for the New Zealand series.

While both boards were willing to undertake the visit, Khan said, it was not possible to accomplish due to “a lack of time and logistical issues”.

The PCB CEO said England would decide about its upcoming tour to Pakistan today, and expressed the hope that they would go ahead with the tour.

“At the moment, our stance remains that we will play our home cricket in Pakistan,” he said, terming it “dangerous” to take sudden and unilateral decisions.

Khan emphasised that reputation was a bigger concern for Pakistan than financial losses. “It is sad that our reputation has been harmed through this unilateral decision,” he said.

He added that New Zealand officials should have instead held talks with Pakistan in order to come up with a joint decision.

On Friday, the New Zealand team had unilaterally postponed the series with Pakistan minutes before the first match was scheduled to start at the Rawalpindi Cricket Stadium — a move that had shocked fans and officials.

According to the PCB, Pakistan had “foolproof security arrangements for all visiting teams” and had “assured NZC of the same”.

The PCB said that the New Zealand team had been satisfied with the security arrangements throughout their stay, adding that cricket lovers in Pakistan and around the world were “disappointed” by the last-minute withdrawal.

Pakistan has finalised a strategy for the blockbuster match against arch-rival India in the upcoming match scheduled to be played on Sunday in the...
Read more
NATIONAL

KABUL/ISLAMABAD: On the heels of the Moscow format talks, Foreign Minister Shah Mahmood Qureshi arrived in Kabul Thursday on his first visit since the...
Read more
Sports

DUBAI: Cricket tensions between India and Pakistan have been heightened by boycott calls in India ahead of their T20 World Cup clash on Monday. A...
Read more
NATIONAL