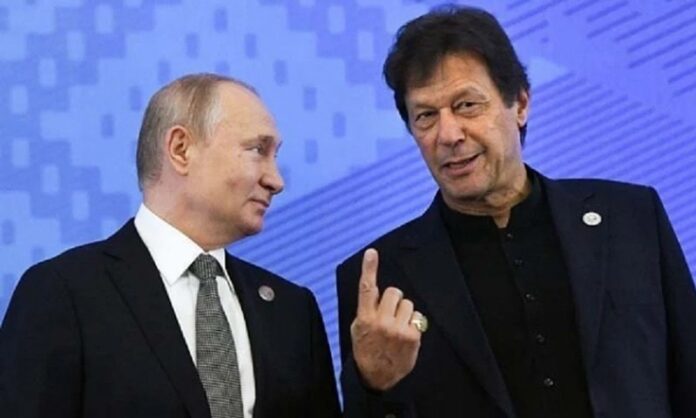 Recalling their earlier telephone conversation of 25 August 2021, the two leaders exchanged views on the latest developments of Afghanistan, bilateral cooperation, and collaboration in the Shanghai Cooperation Organization.

Prime Minister Imran Khan underscored the importance of peace and stability in Afghanistan for regional security and prosperity. He emphasized the urgent need for the provision of humanitarian assistance to Afghanistan and the imperative of averting an economic crisis.

Prime Minister Imran Khan underlined the need for the international community to remain engaged in Afghanistan. He stressed that the Afghan people should not be abandoned at this crucial juncture.

He stressed that close coordination and consultations between Pakistan and Russia on the evolving situation in Afghanistan were of crucial importance.

In the bilateral context, the Prime Minister emphasized the growing cooperation across a range of sectors and reaffirmed Pakistan’s commitment to further upgrade the overall relationship.

He underscored that strengthening trade and investments and energy cooperation were the cornerstones of engagement with Russia.

Relations between Pakistan and Russia have been on an upward trajectory propelled by converging views on important regional and international issues, growing trust, and increasing bilateral cooperation manifested by recent high-level interactions.

The two leaders agreed to remain in close contact.

The situation in Afghanistan was the focus of a telephone conversation between Russian President Vladimir Putin and Pakistani Prime Minister Imran Khan, the Kremlin press service said.

“The sides exchanged views on the situation in Afghanistan and expressed interest in coordinating their countries’ approaches to its stabilization,” it said.
Putin and Khan also discussed prospects for the development of bilateral relations in various spheres.

After the Biden administration announced the end of its US military operation in Afghanistan and the launch of its troop pullout, the Taliban embarked on an offensive against Afghan government forces. On August 15, Taliban fighters swept into Kabul without encountering any resistance and gained full control over the Afghan capital within a few hours.

Afghanistan’s President Ashraf Ghani said he had stepped down to prevent any bloodshed and subsequently fled the country.

On September 6, the Taliban said it had taken control of the entire country and announced a new interim government on the following day. The government is formed by Taliban members only.