The Chinese rise in East Asia

A credible threat for the USA 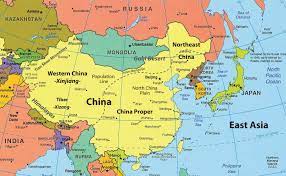 China’s history is multifaceted. Its culture has been tagged both passive and belligerent. China was formed by conquest and mainly ruled by a series of fighters. It has also practiced in different eras passiveness and vigorous trade with its neighbors. It has been a long time since China emerged from external influence to become a stable civilization. These practices have deepened Chinese philosophy and tactical thinking to attain stability in the region. The Chinese Communist Party got prosperity in many ways but along with the stability it has maintained many territorial, maritime and airspace disputes with states like the Philippines, Vietnam, Malaysia, Brunei, Taiwan, India and Japan.

The occupation by Japan in the 1930s and 1940s and the civil war that brought Mao Zedong and the CCP to power in 1949 were a tumultuous period in Chinese history. From this civil war, the People’s Republic of China emerged. However, it ushered in another era of isolation in which China sought to revive itself. Under Mao, China was able to become self-sufficient in almost all resources and technology, but it was 25 years behind modern technology.

The economic reforms introduced by Deng Xiaoping in the late 1970s revolutionized the Chinese economy and created a period of explosive growth. China’s GDP grew at an average 9.3 percent between 1979 and 1993. During that period, the world grew 2.6 percent. China’s GDP quadrupled in just 15 years. It also improved its position as a trading nation, ranking 11th in 37 years.

Prior to the starting of the economic reforms China had policies which did not prove successful, but since 1979, china has been expanding economically. It is obvious China focused on its natural resources and brought stability in the region. The economic prosperity of China made it the  world’s largest economy.

China is considered the mechanical heart internationally because its production contains a variety of goods and its strategy of inviting other states for purchasing, modification, labour, and investment. It is operating the manufacturing of external goods and then selling them to the interested states. Thus China has got influence all over the world.

The  strategy of China is keeping the labour wages low to attract other states. In spite of having huge disputes with the USA, the USA still operates inside China only for cheap labour. The main parts of the mobile accessories, manufactured in China, then backed by the USA in this way, had an influx of the labour globally attracted by the domestic work inside China which expanded automatically. The cheap labour gave an advantage to the consumers  by keeping prices and other services very low. It expanded the government revenue. This came from the huge labour  force and additional taxes from workers.

China is not as timid as it was before to declare itself powerful, hence there is a shift of power from the West to Asia. While domestic stability and security remain the first priority, also China has declared China has the ability to fight for itself to protect its interests

Since 35 years, China got tremendous economic prosperity from trade. It is considered the heart of the Chinese economy, and China is the only country which largely links states to one another globally. It creates paths to other states as well by investing and building railways, roads and other ways to enhance the effects of  globalization. China has started trade from exporting its local goods. Then it joined the WTO to increase its potential . Yet China heightened the tariffs on agricultural products and reduced those on non-agricultural products to increase its trade.

Many foreign countries claimed China was engulfing many small  states by a debt trap policy. Actually, China was investing in many other states to increase both influence and trade. China has huge foreign exchange reserves, the second largest in the world after Japan’s.  China’s global investments and construction activities are valued at $100 million. China’s investment has been shifting from Central Asia toward North America and Europe, where the Chinese companies invested $624.4 billion. Also In Pakistan China invested $50 billion in CPEC projects. Chinese FDI will boost its economy in future.

Above all China has established its economy; then it moved into the military area with military expenditure and heavy investment. Now, China is heavily investing in its military posing a serious threat to the USA. China brought a global shift, from a unipolar world to a bipolar world again.

China has a large population, representing not only a large domestic market, but also an affordable source of manpower for about 800 million people, and it is expected to become the world’s largest economy in coming years. It has an active defence policy, focused on military modernization and the PLA has gained attention. There have been advances in small arms and artillery, but the military does not have the advanced tanks that can challenge modern Western technology. The real development of China was the expansion of the elite forces. These forces, called Rapid Response Units (RRUs), are better skilled and armed than conventional forces.

In 2019, China’s Finance Minister stated that China’s defence budget was $177 billion, yet some analysts argue that it was higher than this figure.

The main purpose of these military exercises was to enhance the military capabilities and also show aggression to adversaries and to the whole world. China has a vigorous inter-space database and is pursuing a policy of information domination. China has deployed a number of satellites that will focus on radar, electronic and electro-optical data collection, high-speed missile alerts, navigation and wind conditions.

There are also programs for anti-intrusion radar, signal information sites, and tactical maintenance vehicles. Promoting China’s command, control, communications, and intelligence systems is a top priority. Accordingly, it is proposed to upgrade the limited communications capability provided by the existing six communications satellites.

Since 1996, administrative reforms internally and externally have spotlighted China internationally. In the international system states wanted to maintain their hegemony, so an emerging power can not be borne by other hegemon states. Wars have been fought for this reason  and the same situation is happening between China and the USA.

The USA wanted to contain China by posing different threats to it, but China deterred the USA in many ways. It is very obvious China is emerging. It got economic stability first, then moved towards military might.

Now China is spreading its influence all over the world. Also Chinese prosperity is hindered by hostile neighbours like India, Japan, Taiwan and other states in East Asia. The USA kept an open eye on China. Whenever China tangled with a neighbour, the USA stepped in to escalate the animosity as it is doing in the South China Sea where it is backing the states with claims opposing China like Malaysia and the Phillipines.

Despite the Sino-US animosity, they stepped into many indirect wars, and recently the imposition of tariffs on each other’s goods caused a serious disturbance in the Sino-US trade which is the backbone of the global economy.

Nevertheless, the Taiwan crisis in March 1996 reminded Canadian politicians of their potential to destabilize the Asia-Pacific region. Although the incident drew attention to Canada’s “One China” policy, it has not changed. Canada has decided to adopt a security strategy for the Asia-Pacific region, which includes China through bilateral and multilateral organizations.  There being no threat to its security, China is about to radically change its strategy and military capabilities. In the 1980s, we realized that the USSR was no longer in danger of a major conflict, and that the Gulf War had had a profound effect on Chinese military thinking. Now the strategic focus is on the attack. The main theme is the expectation of power and the ability to fight modern wars using modern technology.

If current developments continue, China will gain economic and military power in the future, posing a threat to the region and the West. Economic and military developments in China are in full swing. It is important that the West does not talk about its goals. The ground claims, the challenges they face in meeting the needs of their people, and the insecure and dubious nature of

their communist government pose a serious threat to the future of Canada, the West, the United States and China.

China’s astonishing growth in the last three decades surprised the world. Today all the countries are anxious to manufacture products inside China, including the USA and India. Apart from the animosity, this will make China an economic superpower onwards.

According to some analysts, China should not be seen as intent on deposing the USA as the global superpower, but as a peaceful status-quo power with no ambition. Such views are belied by the struggle of foreigners to engage Beijing apart from Asia. China is not as timid as it was before to declare itself powerful, hence there is a shift of power from the West to Asia. While domestic stability and security remain the first priority, also China has declared China has the ability to fight for itself to protect its interests.

Aqsa Batool
The writer is a freelance columnist