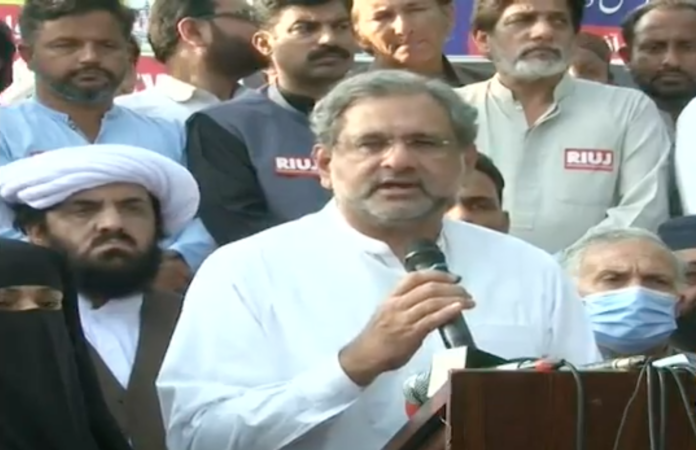 Opposition leaders have joined the protest arranged by the Pakistan Federal Union of Journalists outside of the Parliament House to show solidarity and criticise the government’s proposed Pakistan Media Development Authority.

Pakistan Muslim League-Nawaz leader and former prime minister Shahid Khaqan Abbasi, while speaking to the journalists, said that while journalism is becoming more and more independent across the globe, the opposite is happening in Pakistan.

“Laws regarding how to control the press are being introduced in Pakistan under the guise of the PMDA,” Abbasi said, adding that if the government had some problems with the content being aired by different channels, then merely phoning the channel concerned would have been enough instead of creating an entity like PMDA.

The former premier went on to say that in countries where the press is not free, its citizens are not free either.

“It is the constitutional right of the people of the country to express their views; we are not talking about politics here,” Abbasi said. “Was the Pakistan Electronic Media Regulatory Authority not enough that we needed another media authority?”

He said that different military dictators that ruled Pakistan — from Ayub Khan to Pervez Musharraf — made efforts to suppress the press, adding that the incumbent Pakistan Tehreek-e-Insaf government is following the same path by trying to silence journalists.

“Today, policemen are standing with sticks in their hands to stop journalists [from protesting]” Abbasi pointed out. “An attempt is being made to bring such a law to suppress the truth.”

Similarly, his party mate and PML-N spokesperson Marriyum Aurangzeb said that the PTI-led government’s proposed media authority law is “not only devised to suppress journalism but it is an attempt to eliminate journalists.”

“The government has made a dictatorial move and the PML-N stands in solidarity with the journalist community against it,” she said.

On the occasion, Pakistan People’s Party leader Shazia Marri said that the PMDA is solely proposed to control the media.

“All opposition parties reject the PDMA bill,” Marri maintained. “Sadly, the information minister continued to lie that the PFUJ had been supporting the bill.”

“You cannot resort to policing [freedom of speech],” she said to the government. “We reject this media martial law”.

Meanwhile, the Human Rights Commission of Pakistan also expressed solidarity with the Pakistan Federal Union of Journalists and, in a statement, said that “PMDA is a draconian law”

“The PMDA bill is PTI government’s attempt to further stifle freedom of expression in the country,” the HRCP said in a statement.

Earlier, the Pakistan Federal Union of Journalists has announced to hold set-in protests outside the Parliament House against the proposed Pakistan Media Development Authority.

In a statement, the PFUJ has appealed to the journalist community, civil society, human rights groups, trade unions and the people to join the sit-in that will be staged on the eve of the president of Pakistan’s annual address to the joint sitting of the Senate and National Assembly scheduled for September 13, says a press release.

“It is time to demonstrate unity for a common cause. The proposed PMDA will not just be a body to regulate the media sector but will serve as the central censorship office of the state aimed at regulating the freedoms of expression of all citizens of Pakistan,” the statement issued by PFUJ President Shahzada Zulfiqar and General Secretary Nasir Zaidi said.

Fawad Chaudhry says PMDA is his idea Shahbaz vows to foil government’s bid to pass legislation on PMD “We are appealing to all sections of the media, civil society and concerned citizens from all walks of life to join and participate in the peaceful PFUJ dharna on the morning of September 13, 2021 outside the National Assembly in Islamabad,” they said.

“The dharna is aimed at demonstrating solidarity and pooling widespread support against the creation of the PMDA and strategising the protection of freedom of expression of citizens, defending the rights of journalists and pre-empting the planned assault on independent media in the country,” the statement said.

The PFUJ leaders said the continuous onslaught by the government on the rights of media workers, safety of journalists and their economic strangulation, had reached its highest limits.

It has left the media sector teetering on the brink of collapse, said the press release.

“The PMDA is a planned one-window operation to impose widespread censorship through pooling of the budgets of several media regulators thereby providing massive resources to government proxies to crackdown on the media so that it becomes totally captured and too weak to provide professional coverage of upcoming elections,” the statement added.

“The proposed PMDA, therefore, is not just a media manipulation mechanism, it will also serve to undermine democracy and parliamentary system, which is why it is necessary for all journalists, workers, students, teachers, lawyers, activists and other citizens to join this dharna to foil the nefarious designs against democracy and free media in Pakistan,” the PFUJ leaders said.

The Rawalpindi Islamabad Journalists Union will also join the sit-in outside the Parliament House.

The joint action committee of different media organisations that include Pakistan Broadcasters Association, All Pakistan Newspapers Society, Council of Pakistan Newspaper Editors, the PFUJ, and the Association of Electronic Media Editors and News Directors have supported the protest against the proposed PMDA.

All Opposition parties, including the Pakistan Democratic Movement and the PPP, have already rejected the proposed PDMA bill to ban the media, expressing solidarity with journalists and participating in the sit-in.

Off-screen anchors will hold their talk shows at the sit-in site which will continue outside Parliament on the occasion of the joint sitting of Parliament Monday.

with additional input from INP