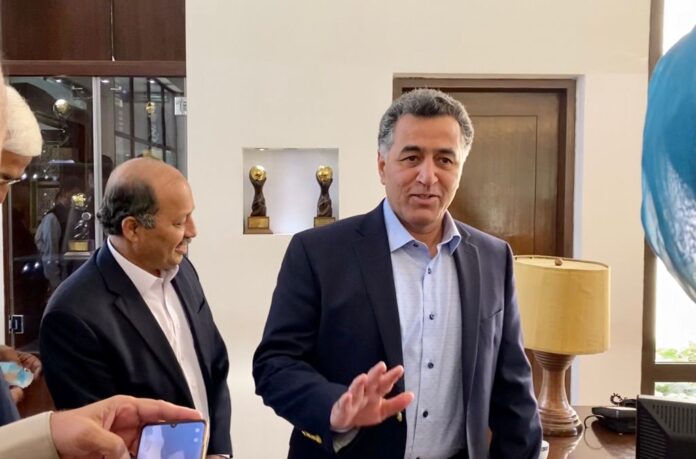 Leading a delegation of senior officials, Gen Hameed reached the Afghan capital in the morning.

The country’s top spy will discuss ways to ensure that spoilers and terrorist organisations do not take advantage of the volatile circumstances, Express Tribune reported, citing sources.

The media outlet reported that the ISI DG will also meet Pakistan’s envoy in Kabul to discuss the matter of repatriation and transit through Pakistan of foreign nationals and Afghans fleeing Taliban rule.

It further reported that Gen Hameed will meet the Taliban leadership to review multiple issues that concern both countries and will discuss the situation along the Pak-Afghan border among other issues.

Reuters quoted a senior official in Pakistan who had said earlier in the week that Hameed could help the Taliban reorganise the Afghanistan military.

According to Lindsey Hilsum, a correspondent for Channel 4 News currently in Kabul, Hameed told him he was there to meet Pakistan’s ambassador to Afghanistan, Mansoor Ahmad Khan.

Pakistani ISI Chief Faiz Hameed just arrived in Kabul Serena Hotel. Told me he was here to meet Pakistani Ambassador – wouldn’t say he was meeting Taliban leadership (but he must be of course!) pic.twitter.com/afhfpNqzw8

His tour also coincides with the expected announcement of a national government by the Taliban who now shift gears from insurgent group to governing power.

Taliban co-founder Mullah Abdul Ghani Baradar, reported by some Taliban sources to be in line to lead the new government, said in remarks on Al Jazeera that the new administration “will include all factions of the Afghan people.”

“We are doing our utmost efforts to improve their living conditions. The government will provide security because it is necessary for economic development,” he said.

While the West has adopted a wait-and-see approach to the group, there were some signs of engagement with the new leaders gathering pace.

The United Nations said it had restarted humanitarian flights to parts of the country, linking Islamabad with Mazar-i-Sharif in northern Afghanistan and Kandahar in the south. While a Taliban spokesman tweeted Friday that China’s foreign ministry had promised to keep its embassy in Afghanistan open and to “beef up” relations and humanitarian assistance.

There were also some signs of normality creeping back in the Afghanistan capital.

Qatar’s ambassador to Afghanistan said a technical team was able to reopen Kabul airport to receive aid, according to Al Jazeera, which also cited its correspondent as saying domestic flights had restarted.

The airport has been closed since the United States completed operations on August 30 to evacuate diplomats, foreigners and Afghans deemed at risk from the Taliban.

Western Union and Moneygram said they were resuming money transfers, which many Afghans rely on from relatives abroad to survive, and Qatar said it was working to reopen the airport in Kabul — a lifeline for aid.

— With additional input from AFP, Reuters