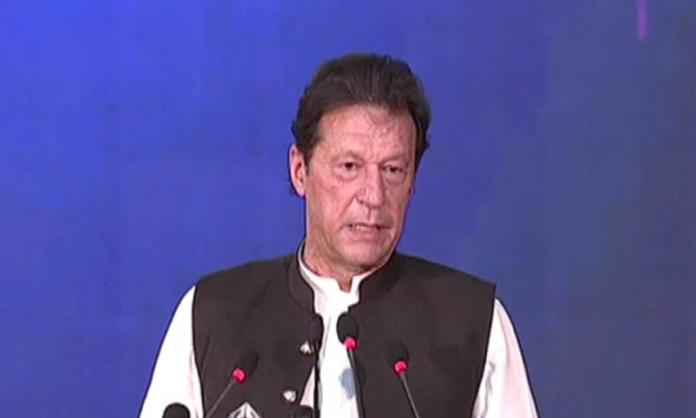 During the three-year rule of the Pakistan Tehreek-e-Insaf government, Prime Minister Imran Khan highlighted that his government had made progress in improving the economy and welfare of the country.

On completion of three years in office, Prime Minister Imran Khan highlighted the key achievements of his government on August 29, marking a journey of stable economy and development and welfare projects, reported Radio Pakistan.

The PM launched the Three-year Performance Report at the Convention Centre Islamabad to give an insight into the efforts of each ministry and division in facilitating the common man in line with the vision of Naya Pakistan.

The prime minister began the speech by welcoming “all our chief ministers, governors and the leaders of AJK who have just been elected” before commending Sindh Governor Imran Ismail for singing his famous Tabdeeli song prior to his speech.

“I’m not sure if he has more talent for singing or governance,” PM Imran said about the governor’s performance.

He then recalled the time when his party was nascent and “had just five to six people who were mocked for being PTI representatives”.

He compared this to his career as a cricketer, wherein the premier said that one could get standing ovations one moment, and be cursed the next. He underscored that this prepared him for a life of struggles.

“Until you go through struggles, you cannot do anything big,” the prime minister said. “No leader became big with a shortcut. Quaid-e-Azam was a big leader. He struggled in his life and people will always remember him [for that].”

On assumption of power in August 2018, the government of Pakistan Tehreek-e-Insaf government faced numerous inherited challenges, said Imran. However, in three years, the journey of development has added several feathers to the cap of the government.

“We had no capital to settle loans. We had no foreign exchange. The current account deficit we faced was of $20 billion. If Saudi Arabia, China and UAE had not helped us at the time, rupee would have declined further and caused us some real damage,” he said.

“We had to go to the IMF and whoever you acquire loan from they set [certain] conditions,” he added.

“We witnessed record sales in motorcycles and tractors, while car sales saw an 85 percent increase. It means that the people’s lifestyle is improving.”

Defending the authenticity of the figures he quoted, PM Imran quipped: “These figures are not of Ishaq Dar’s, these are real.”

The prime minister accused his rivals of “spreading hopelessness because they want the old system back”.

It bears mentioning that The Economist recently ranked Pakistan as the ‘third-best performing country’ for handling the Covid-19 pandemic.

Moreover, he highlighted that the National Accountability Beauru had recovered Rs519 billion in their anti-corruption efforts, whereas it had only recovered Rs 290 billion in the 18 years prior to the PTI assuming office.

The prime minister then mentioned the country’s tiff with India in the aftermath of Pulwama incident and thanked the armed forces for their part. “I appreciate our army and air force. As they (Indian fighter jets) came into our territory and launched an offensive, we realised the [power] of our army.”

Without naming any names, the premier accused a “mafia” of defaming state institutions, particularly the army. “I also criticised the army in the past,” he said. “Judiciary and army also make mistakes but it doesn’t mean we should [expect] them to topple the democratic government.

“We know the Indian lobby is trying hard to defame Pakistan Army. They are implying that the Taliban won because of Pakistan Army.”

“I thank God, we have the kind of armed forces that we do. When [India] bombarded us in the middle of the night, I realised then that if we did not have the kind of army that we rely on so much, what would we do before such a powerful opponent?” he questioned.

He discussed his government’s handling of the coronavirus pandemic, recalling how he resisted the pressure to impose a “blanket lockdown and by the grace of Allah we were protected”.

“The WEF (World Economic Forum) praised Pakistan for its handling of Covid-19, and the Economist [acknowledged] Pakistan for being one of three countries that effectively tackled the coronavirus,” he said.

To uplift the common man, the government launched the projects such as Naya Pakistan Housing Programme, Ehsaas programme and the Kamyab Jawan Programme.

During the speech, the prmeier called upon the world to help Afghanistan achieve peace after the decades of turmoil it has suffered, stating that “the world should try its best to bring peace in Afghanistan. There has been conflict there for 40 years. Their people have faced such hardships.”

“It is time now that the world helps Afghanistan achieve peace,” he said.

“The Taliban are trying to reach an inclusive political settlement, which we wanted from them in the Doha talks, they are speaking of human rights and have granted a general amnesty, they have vowed they will not allow the use of their soil against any other country, and this is what the world wanted,” he said.

PM Imran Khan said that the Afghan nation is a “brave nation, fearless and one to fight”.

“If it wasn’t, then we must remember that one million Afghans were martyred while fighting the Soviets. No one has fought like them for their independence.

“Because no one fights for a corrupt government,” he said, to applause by the audience.

The prime minister said that the Afghans have a “psyche” whereby whichever foreign power attempts to influence the country, the nation stands up against them. “They fight for their independence.”

“So they were never going to fight for a Western-backed government.”

Prime Minister Imran Khan said the world is raising a hue and cry over the fate of women under Taliban rule, but said it begs the question: “Has any foreign power ever come into a country and ensured its citizens get rights?”

“It is women themselves who have ever secured their own rights. Our women have the power to get their rights. We need only empower them with education.

“In England or the West, did any foreign power ever get the women rights? They worked hard to secure their own rights. And this is what our government has focused on immensely,” PM Imran Khan said.

He went on to speak of how succession certificates have been made easy to acquire through National Database and Registration Authority. “The biggest benefit is that we are ensuring inheritance laws which give women a share in inheritance.”

On the occasion, Prime Minister Imran Khan stated that the Aviation Division is in pursuit of the vision “to maintain the highest standards of safety, security and service by promoting air connectivity in the aviation sector, ensure precision and accuracy in meteorological services of Pakistan”.

During the period under review, the government has taken undertaken several initiatives like promulgation of National Aviation Policy (NAP 2019), digitalization of the processes to increase the efficiency of the aviation sector, meeting international standards at airports, provision of world-class facilities to air passengers, encouragement of tourism through increased facilities at airports, enhancement of supervision and coordination to realize its vision of “Safe, efficient and profitable air transport industry of Pakistan and highest standards of weather forecasting.”

Besides, it regulated and implemented instructions/standard operating procedures issued by the National Command and Operation Center to stem the spread of coronavirus in the country.

For updated and accurate weather reports, the Pakistan Meteorological Department has developed a mobile application through its resources, started a weather forecast service for farmers at the tehsil level in local languages, upgraded its website and established Information Technology besides providing weather information on social media.

The prime minister also thanked his entire team and his allies — Pakistan Muslim League-Quaid, Balochistan Awami Party, and Muttahida Qaumi Movement, and the Grand Democratic Alliance — who stood with the party in the last three years.

Earlier, PTI Senator Faisal Javed Khan said in a tweet that the PTI government would present a first of its kind performance report to the public on a regular basis.

The report, compiled by the Ministry of Information and Broadcasting under the patronage of its head Chaudhry Fawad Hussain, focuses on the accomplishments the government has made despite the global economic recession in the wake of the coronavirus pandemic.

The 251-page report gives an outline of the achievements of 44 public bodies including ministries, divisions and departments, through infographics and relevant facts and figures.

In the domain of legislation, 54 laws were enacted.

The report is available for public information at the official website of the Directorate of Electronic Media and Publication.

Referring to the launch of the report, Information Minister Fawad Chaudhry said that the PTI “can proudly present its performance of [the past] three years to the nation”.

Taking a dig at the opposition, he questioned how many governments in Pakistan had been accountable in the past. “Those who ruled for thirty years are hiding their faces,” he said.

“Three years [of performance in the areas of the] economy, foreign policy and internal stability will bring facts to light today.”

August 14, 2022
The Taiwan crisis will be a flashpoint between China and the USA. China considers Taiwan its territorial part, while the USA has long maintained...