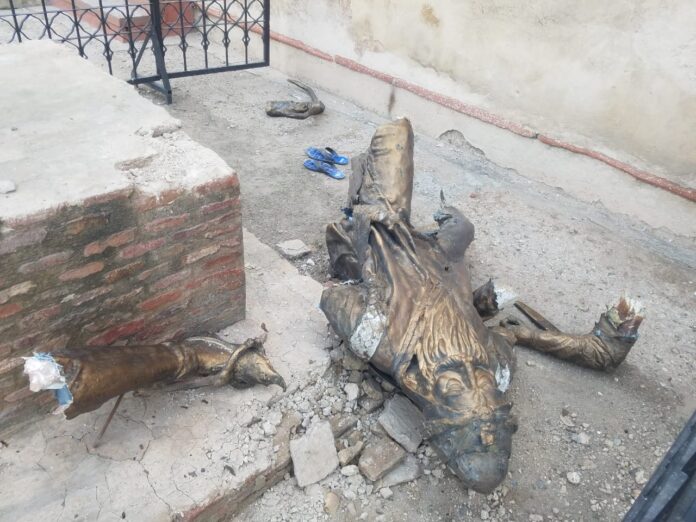 LAHORE: A man vandalised the statue of Maharaja Ranjit Singh, placed at Lahore Fort outside the haveli of Rani Jinda, on Tuesday.

It was learnt that the person who damaged the statue was Mohammad Rizwan, son of Mohammad Ashraf and resident of Khotiyala Sheikhan, Mandi Bahauddin.

Rizwan entered the fort at around 8:30 in the morning and damaged the statue.

The official on duty explained that Rizwan climbed the six feet fence around the statue. The guards on duty immediately rushed to Rizwan and pushed him out of the fence. However, in the meantime, he had broken the body of the statue, which was resting on a horse.

The official informed that the statue was installed in front of the haveli of Rani Jinda (the wife of Ranjit Singh) in 2019 and since then three attempts have been made to damage the statue.

The statue was installed to mark the 180th death anniversary of Ranjit Singh.

“These are religious fanatic people, who come with a particular mindset to the fort for damaging the statue. They do not understand the fact that Ranjit Singh had been ruling this area for many decades and was known as a hero,” the official said.

“The statue was donated to the Walled City of Lahore Authority (WCLA) by Bobby Singh, an influential Sikh of Canada, and was constructed by the Faqir Khana Museum Lahore.”

Lahore Fort Incharge Faiza Shah informed that the body of the statue was immediately sent to a workshop for repairing and the area, where the statue was placed, has been cordoned off.

“We immediately called the police, who arrested the culprit. An FIR has been lodged against him. Rizwan is now in the custody of police,” she said.

Meanwhile, Punjab Minister for Human Rights and Interfaith Harmony Ejaz Aslam visited the site at Lahore fort and said that it was not a fault of the WCLA because the man had gone to the fort with a particular mindset to damage the statue.

On the other hand, the CCPO Lahore Ghulam Mahmood Dogar said that the accused, who damaged the statue with a hammer, has been arrested and strict legal action will be taken against him.

WCLA spokesperson Tania Qureshi informed that the statue would soon be repaired and installed with more security and protection. “Lahore Fort is a place where there is reflection of all religions and we respect all. We will not let any such thing happen at the fort that hurts the religious sentiments of the minorities or the public. The people visiting the fort should get to know the history as well so that they understand the importance of the places and placement of statues.” she said.

WCLA Director Conservation and Planning Najam Us Saqib expressed his distress over the situation and said, “It is an awful act by the accused. We will very soon repair the statue and place it again.”