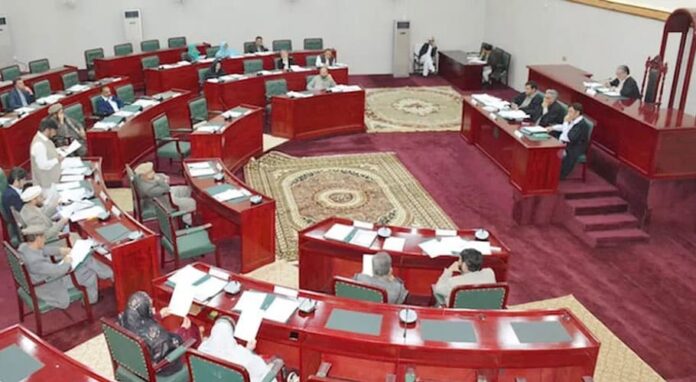 ISLAMABAD: The Pakistan Tehreek-e-Insaf, which talked about austerity and cutting administrative costs of the government, has facilitated 28 elected and non-elected members of the party and its allies through granting portfolios with a historic size of cabinet in Gilgit-Baltistan.

According to a notification of the law and prosecution department of GB, the government through amendment in rules of business has facilitated creation of posts of coordinators, under which the number of coordinators to the chief minister has been increased from two to 10. “It is notified for general information and compliance that the Governor Gilgit-Baltistan has been pleased to further amend rule 29(A)(3) amended in 2017 of the Gilgit-Baltistan Rules of Business, 2009 by inserting a new proviso i.e. after the word two special Coordinators to the Chief Minister GB the word “and ten Coordinators to the Chief Minister,” the notification said.

As per the new rules notified, the coordinators shall be appointed by the chief minister and shall hold the office during his pleasure. They shall be entitled to a salary equal to half of the salary of a special assistant to the chief minister.

According to reliable sources, the regional government, through expanding the cabinet size, would accommodate a coordinator of Pakistan Muslim League-Quaid, as it has appointed a special assistant from Muttahida Qaumi Movement-Pakistan though the two parties have no considerable vote banks in GB. The two parties are being given shares in GB by PTI only to please them and get support in the center. Apart from these two parties the PTI government would also accommodate some influential political figures in the region besides including one or two women leaders of the party.

The ruling party which formed government in GB after the election has now enhanced the number of cabinet to 28 consisting 12 ministers, two advisers, three special assistant to chief minister, 10 coordinators and the chief minister. Including the speaker and deputy speaker the total number of public office holders in GB becomes 30, extremely larger than the total number of members of the ruling party and its allies in Gilgit Baltistan Legislative Assembly which is 23.

Interestingly this huge size of cabinet is formed to rule a 1.6 million populated region where only four to five members of the cabinet is enough to handle rule and run government affairs. As per the constitution, the Cabinet can have a maximum of 11 percent of the total strength of the parliament whereas each cabinet member must be a member of parliament.

If the same criterion is followed in GB, there could hardly be four members of cabinet including the chief minister. However, through the Self Governance Ordinance of GB, 2009, introduced by Pakistan People’s Party in 2009, the size of GB cabinet was suggested to consist of nine members, which included the six ministers, two advisers and chief minister.

The PTI government in GB set records by expanding the cabinet to at least 28 members including chief minister which is 87 percent of the total number of GBLA (33) against the 11 percent set by the constitution of Pakistan.

To accommodate a maximum number of elected members of the assembly the previous ministries were bifurcated into further ministries without any justification. A ministry held by a minister of PPP during 2009 to 2014, was divided into two ministries and two advisers.

A new ministry of Labor, Industry and Commerce was created to accommodate an elected member of PTI from Hunza Col (r) Obaidullah Baig despite the fact that no industry and commerce related activities were there in the region.

According to a former secretary of Kashmir Affairs and GB, the move of expanding the cabinet and facilitating more political figures would ultimately burden the limited budget of the area without any gain. With the increase in administration and employees related expenses, the expenditure on education and health sectors (including both development and non-development budget) were continuously reducing during the past few years.

Though the ruling party has increased the non-development budget from Rs32 billion to Rs47 billion, the additional budget would help the deprived area in case the public money is spent in such non-productive areas.