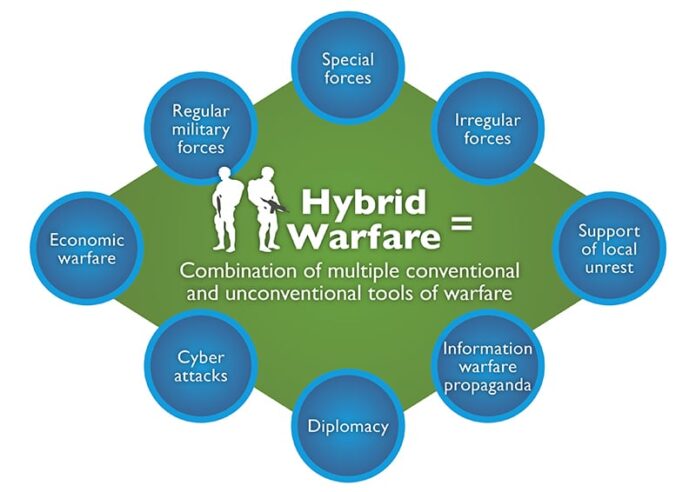 “Every age has its own kind of war, its own limiting conditions, and its own peculiar preconceptions.”—Carl von Clausewitz

Amid the very global battle, all countries are straining their every sinew to overcome their adversaries politically, economically, in general, regionally, in particular. Every country seems to be hellbent on standing out prominently across the globe.

To achieve these goals, many countries, historically, had employed overt tactics for knocking their regional rivals down peg in order to have their edge over them. But the age of overtly exerting influence, invading through regular military tactics, has gone. The present-day global war is quite unique in nature which includes military strategy that blends conventional warfare, so-called ‘irregular warfare’ and cyber-attacks with other influencing methods, such as fake news, diplomacy and foreign political intervention, and is currently known as “hybrid warfare”.

“Hybrid Warfare”, nicknamed as “grey zone warfare”, is the latest modus operandi in fighting that seems dead common but leaves very deadly effects. Before moving on and discussing the lethality and consequences of this warfare, it is essential to learn a more comprehensive definition.

The  2015  edition  of  Military  Balance  provides  a  very  comprehensive  definition  of  the  latest  manifestation  of  hybrid  warfare,  highlighting the methods  employed,  namely “the use  of  military  and non-military  tools  in  an integrated  campaign,  designed  to  achieve  surprise,  seize  the  initiative  and  gain psychological  as  well  as  physical  advantages  utilizing  diplomatic  means;  sophisticated  and  rapid  information,  electronic  and  cyber  operations;  covert  and  occasionally overt  military and  intelligence action;  and  economic  pressure.” Additionally, NATO defined it as: “hybrid threats combine military and non-military as well as covert and overt means, including disinformation, cyberattacks, economic pressure, deployment of irregular armed groups, and use of regular forces. Hybrid methods are used to blur the lines between war and peace, and attempt to sow doubt in the minds of target populations.”

after learning the definition, now, we will now have a glimpse at the chronological perspective in order to see the practical manifestation of also called non-linear war.

During the 2000s, the use of the term “hybrid” became a common way to describe contemporary warfare, particularly because of the increasing sophistication  and  lethality  of  violent  non-state  actors  and  the  growing potential  of cyber warfare.

Further, in 2006, during the conflict  between  Israel  and  Hezbollah, this term was frequently used.That was an example  of  a  war  that  fitted  contemporary definitions  of hybrid  warfare.  Hezbollah, which  had  been  trained  and  equipped  by  Iran,  surprised  Israel  with  its  sophisticated  combination  of  guerrilla  and  conventional military  tactics  and  employed  weaponry  and  communication  systems  normally associated  with  the  armed  forces  of  developed  states.  At  the  strategic  level, Hezbollah  made  effective  use  of  the  Internet  and  other  media  for  information and  propaganda.  Its  information  management  proved  much  more  successful than  Israel’s  in  influencing  global  opinion  from  the  start  of  the  conflict.

More importantly, while discussing the very hybridity of warfare, when this term went on peak, it was tried out elsewhere, as by Russia against Ukraine. Russia can, at no level, be condoned for practicing this lethal mode of fighting in occupying parts of Ukraine and the whole of Crimea. In 2014, Russia, while using asymmetric tactics of war began to spread disinformation, and made intense use of cyber-attacks. To annex Crimea,  the  Russian  Federation   supported  separatist  groups  in  eastern  Ukraine.  Russian  techniques  included  the  traditional  combination  of  conventional  and  irregular  combat  operations,  but  also  the  support  and  sponsorship  of  political  protests,  economic  coercion and other such tactics.

Keeping in view the lethality of this latest phenomenon, Pakistan must learn a lesson and devise a strategy by using all required paraphernalia in every arena to counter India and strengthen its cyber-security.

The  Russian  approach  to  hybrid  warfare does  not  exclude  the  direct  use  of  military  force  when  necessary.  In  summer 2014,  when  Russia  had  exhausted  its  use  of  non-military  hybrid  methods,  military  operations  in  Ukraine  took  on  the  character  of  limited  conventional  war. Russian  battalion  tactical  groups  (BTG)  intervened  directly  in  combat  against the  Ukrainian  army.

China’s People’s Liberation Army is also a potential adversary in hybrid warfare. Members of the PLA were recently indicted by the USA for hacking Equifax’s computer systems. In that September 2017 attack, the personal information of 145.5 million Americans, 400,000 Britons and 19,000 Canadians was exposed, including credit records, addresses, and credit and debit card numbers.

In October 2019, hackers obtained personal identifiable information from three hospitals in southwestern Ontario: Listowel, Wingham and Michael Garron (formerly Toronto East Hospital). At Garron, the malware targeted computer systems that collected information, demanding a ransom to retrieve data that had been encrypted by the attack, and causing major disruptions for patients and staff, who had to resort to transcribing patient data by hand onto paper

The City of Woodstock fell victim to a cyber attack. It chose not to pay a ransom, but it spent $1.04 million on recovering and re-equipping its system.

On the other hand, the City of Stratford paid $75,000 worth of Bitcoin to obtain encryption keys to unlock its system information after a cyber attack.

Surprisingly, Pakistan’s old-cum-arch foe India has left no stone unturned in this respect to keep Pakistan unstable politically, economically, diplomatically, and especially endogenously, by multi-pronged tactical intrigues. Arguably, since the CPEC accord, it has been employing  techniques of stirring up insurgency in Balochistan; people are divided linguistically and ethnically. They are pitched against their own security institutions and the sense of  deprivation is created in them as well.

Let me borrow few lines from an article, published in a Pakistani newspaper, on 3 June 2018 to adduce my viewpoint, ‘a latest book Spy Chronicles, co-authored by Asad Durrani, Ex-ISI chief, and his Indian counterpart AS Dulat, Ex-head of RAW. While discussing the importance of Balochistan, Asad Durrani writes, “It is an important area for different purposes. Some are there to blow up the pipeline Iran and Pakistan want to build or to sabotage the economic corridor; others because they don’t want to miss out on what the first lot are planning. The place is crucial for the ‘New great game’.”’

That vividly depicts the techniques of hybrid warfare are used by India to destabilize Pakistan.

Moreover, NATO policy-makers stated that a new era of conflict has begun. To cope with these indigenous warfare attacks, NATO seems to devise a strategy and is making efforts to collect and evaluate information about hybrid attacks directed against its member states.

It is also developing rapid-reaction cyber-defence teams that can be sent at an ally’s request in a crisis. The cyber teams work on civil emergency planning, critical infrastructure protection, counterterrorism and energy protection.

NATO wants to prevent conflicts from escalating and seeks to develop counter-strategies that would improve intelligence sharing. Beyond NATO, more units are being dedicaated to deal with hybrid threats, such as the European Centre of Excellence established by Finland. But all this work requires the sharing of confidential information and classified documents, which means significant trust must be built.

Keeping in view the lethality of this latest phenomenon, Pakistan must learn a lesson and devise a strategy by using all required paraphernalia in every arena to counter India and strengthen its cyber-security.  In addition, The RCMP urges not to pay any ransom to the hackers, it further stated that after payment there is no surety of the recovery of data but it may bolster to further their such nefarious techniques.

Sanwal Ali Rind
The writer can be reached at [email protected]