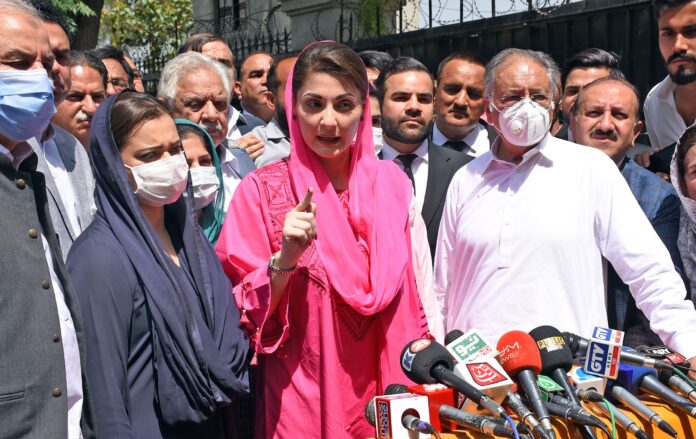 Pakistan Muslim League-Nawaz Vice President Maryam Nawaz on Wednesday said that Prime Minister Imran Khan is “not representative of the people of Pakistan”, therefore, he has no right to comment on Pakistan’s nuclear status.

Speaking to the media in Islamabad, Maryam was referring to an interview of the prime minister on Axios on HBO, wherein he had said earlier this week that “the moment there is a settlement on Kashmir, the two neighbours [India and Pakistan] would live as civilised people. We will not need to have nuclear deterrents.” He had also said the “only one purpose” of the nuclear programme was deterrence. “It’s not an offensive thing,” he had said.

Dawn reported on Wednesday that Maryam went on to say that the premier was not the custodian of the country’s nuclear programme, rather Pakistan’s population of 22 billion was its custodian, for which the people and the leaders had made sacrifices. In this connection, she gave the examples of “former prime minister Zulfikar Ali Bhutto embracing martyrdom and PML-N supremo Nawaz Sharif being exiled.”

“You [the prime minister] should not even talk about Kashmir, on which you have made a deal,” she said, adding that if the premier believed he could start a new debate by making such remarks, he was wrong.

Maryam said Pakistan’s nuclear programme guaranteed its security and had it not existed, the country would have been facing big issues other than just Kashmir today.

“You, a selected prime minister, have no right to make such a statement [about the nuclear programme],” she said.

A day earlier, the PML-N had reacted to the premier’s remarks during a National Assembly session and alleged that the cricketer-turned-politician was brought to power to fulfill the “foreign agenda” of rolling back Pakistan’s nuclear programme.

Iqbal had alleged that the premier’s purpose to give the statement was to send a message that Pakistan was ready to roll back its deterrence.

“[But] Pakistan’s nuclear deterrence is non-negotiable,” he had declared.

Asked about her opinion on the premier’s comments on rape in the same interview, Maryam said his views were reflective of a “criminal mindset”.

During the interview, the prime minister was asked to respond to his earlier comments linking the incidence of rape to obscenity. In response, he had had said, “It is such nonsense. I never said that […] I said the concept of purdah which is to avoid temptation in society.” He had gone on to say “If you raise temptation within society and all these young guys have nowhere to go, it has consequences.”

The interviewer, journalist Jonathan Swan, had then asked him whether he thought “that what women wear has any effect, that it is part of this temptation?”

“If a woman is wearing very few clothes, it will have an impact on men unless they are robots. I mean it’s common sense,” the prime minister had replied — a remark that has drawn sharp criticism.

Commenting on it on Wednesday, Maryam said the premier’s remarks had exposed his mindset.

“[He is] a person who validates rape and holds the victim responsible. Pakistan needs to be rid of this mindset of rape apologists,” she said.

The PML-N leader went on to question whether Zainab’s rape and the motorway incident were a consequence of what the victims were wearing.

“He [the prime minister] should be ashamed,” she said, condemning his remarks.

Maryam added that through his remarks in the interview, the premier had “insulted rape victims”.