The helplessness of the Muslim world over Zionist atrocities

The Muslim countries’ leaders need to realise what is happening 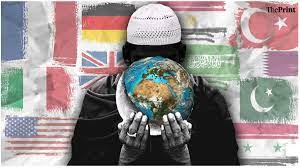 Anti-Islamic forces have always been engaged in their nefarious activities against the religion of Islam. For this purpose, sometimes Muslims are declared terrorists, sometimes Rohingya, sometimes Kashmiri, and sometimes oppressed Muslims of Palestine, but all are subjected to oppression and barbarism.

The way the Palestinian people have been going through Israeli atrocities for decades, the world has not been able to find a solution, nor has it been able to curb Israeli barbarism. Millions of Palestinians have been martyred in barbaric Zionist attacks because of this unresolved issue. Israel has forced millions of Palestinians to become homeless by setting up ghettos in the Palestinian territories. Every year in the Gaza Strip, especially during the month of Ramadan, the Israeli army shells the Palestinian people and makes their lives miserable. This time, the Israeli soldiers have bathed the Al-Aqsa Mosque in the blood of the oppressed Palestinians. If the Muslim world continues to ignore the Israeli atrocities against humanity in the same way, then if the first qibla is not safe from Zionist atrocities today, and our other holy places will not be safe tomorrow.

It is a fact that former US President Donald Trump during his tenure has been encouraging Israeli occupation of the First Qibla, Al-Aqsa Mosque in Jerusalem, by establishing the US embassy in Jerusalem and declaring it the capital of Israel. He played a key role in consolidating Israeli illegitimacy over the Palestinian territories, his intentions against the Muslim world were not hidden from anyone, but Muslim leaders pursued a policy of expanding ties with the Trump Administration based on their own interests, Trump was even invited to a meeting of Muslim NATO countries in Riyadh to send a message of goodwill. Trump called Iran a terrorist country at the same meeting, while Israel’s back was patted for continuing the atrocities against the Palestinians and it is still being supported today.

It is the result of the incompetence and inaction of the Muslim leadership that today the Israeli forces are breaking into the Al-Aqsa Mosque and bcommitting atrocities on the worshipper, and now the people of Gaza are being brutally martyred by air and ground attacks while fasting. More than 200 innocent Palestinians have been killed and hundreds injured in the attacks so far. The whole world is suffering as a result of these atrocities, but the Muslim leadership is still in a trance. Violence against humanity is being verbally condemned by many Muslim countries, but what can be expected from the non-Muslim world if the strength and solidarity needed to overcome Israeli tyranny are not visible in the Muslim world?

Whether it is Zionists in the land of Palestine or Indians in occupied Jammu and Kashmir, the cheapening of Muslim blood continues and the Islamic world has no choice but to protest and condemn this naked aggression. The helplessness of Muslim countries over Zionist atrocities around the world is a source of shame, the recent incidents of desecration of Jerusalem by Zionist forces and the violence against Muslim worshipers and Israeli airstrikes on the homes of oppressed and besieged Muslims in Gaza are once again highlighting the need for unity in the Muslim world.

The Muslim countries have formed the Organisation of Islamic Cooperation, but no common voice has ever been able to influence the world through this platform. The Organisation of Islamic Cooperation has also convened a meeting on the situation in Jerusalem, in which Muslim countries have issued a joint statement of condemnation and called on the international community to take action to protect the Palestinian people. It is the largest organization in the Islamic world representing 57 Muslim countries, with permanent delegates to the United Nations and the European Union, but due to the internal situation of the Muslim world, distances and grievances, the common voice of the Muslim world does not seem to carry any weight, which should be achieved in principle by the Muslim world with a population of 1.8 billion, because the Muslim Ummah is scattered from within, even when sitting together on the platform of the Organisation of Islamic Cooperation.

As long as the Muslim Ummah remains divided, it will be beaten and its problems will not be solved. Among the fundamental regional issues of the Islamic world, the issue of Palestine and the issue of Kashmir are at the forefront. There is a similarity between the two. Solutions have been sought for more than seven decades, but so far no progress has been made in declaring these regional, human and political rights issues, decisively protesting and condemning Israel’s atrocities against the Palestinians.

Statements are not the solution to the problems, the Muslim Ummah itself is responsible for not hearing the Muslim world with a GDP of $27,000 billion. The sub-problems and conflicts of the Muslim countries have divided them and reduced their total power.

Therefore, whether it is Zionists in the land of Palestine or Indians in occupied Jammu and Kashmir, the cheapening of Muslim blood continues and the Islamic world has no choice but to protest and condemn this naked aggression. The helplessness of Muslim countries over Zionist atrocities around the world is a source of shame, the recent incidents of desecration of Jerusalem by Zionist forces and the violence against Muslim worshipers and Israeli airstrikes on the homes of oppressed and besieged Muslims in Gaza are once again highlighting the need for unity in the Muslim world.