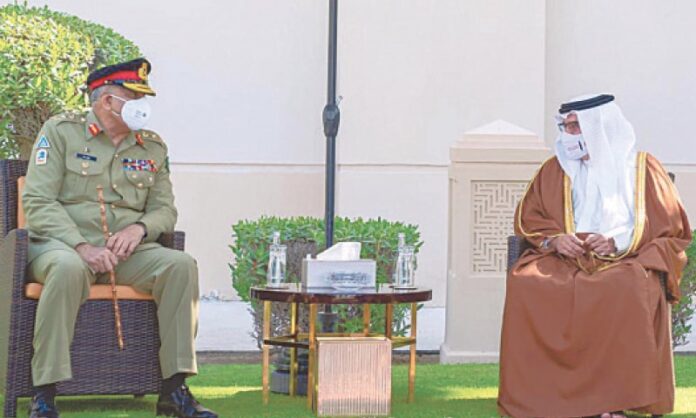 According to the ISPR, during the meeting with the COAS, “matters of mutual interest, regional security situation including recent developments in Afghan Peace process, bilateral defence security activity, collaboration for regional peace and connectivity” were discussed. The COAS appropriately responded that Pakistan was “resolutely committed to safeguard the sovereignty and territorial integrity of KSA and defence of the two holy mosques.”

Notwithstanding the homilies and platitudes usually expressed on such occasions, is it really a new beginning for frayed Saudi Pak relations during the past year or so. Islamabad’s ties with Riyadh had hit an all-time low thanks to the infantile behaviour of our foreign minister Shah Mehmood Qureshi who openly complained about the Saudis stance on Kashmir perceived as lukewarm by Islamabad. Beggars cannot be choosers; flush with newfound glory the young ruler of KSA promptly pulled the plug on part of the virtually free money lent out to Pakistan. Adding insult to injury, Islamabad tried, albeit unsuccessfully, to spearhead an anti-OIC group sponsored by Malaysia’s Mahathir Muhammad.

Khan has already crossed the Rubicon so far as his tenure is concerned. Now it seems the mid-term blues have taken over. Perhaps here is a somewhat belated realisation that the PTI has failed to deliver on most of the tall promises it had made to the electorate before elections time.

Pakistan was lucky this time around. President Donald Trump, big time Saudi supporter losing to his Democratic contender Joe Biden was a big setback to the Saudis’ geopolitical intrests in the region .Islamabad (at least partly so), is back in the game. Washington badly needs Pakistan’s cooperation in order to facilitate a smooth exit of its forces from Afghanistan. There is also talk about the US being the facilitator behind the perceived thaw between Islamabad and New Delhi.

However, the most audacious speculation is about the US setting up a base on Pakistani territory. This seems highly unlikely. Not that Islamabad will outrightly reject such an offer if made, but more so because granting of military bases with all its appended complications is no longer required. Technology and the heavy political costs have obviated such options.

The one tangible gain from the Saudi visit is the formation of the high-level supreme co-ordination council to oversee relations between Saudi Arabia and Pakistan in the right direction.

Khan, only a few days ago, after castigating his diplomats for being incompetent and corrupt, is basking in the glory of international limelight. In any case for a leader beleaguered at home is always good to receive red-carpet treatment, especially from the Royals of Saudi Arabia.

The PTI chief has very little to cheer about at home. His party has lost virtually all by-elections even from constituencies considered ‘safe’ for the ruling party. Losing NA-249 from Karachi was especially humiliating for Khan coming at number 5 in the losing order and it was not even possible for the PTI to complain about rigging without further losing credibility.

As was generally anticipated, the axe fell on the hapless chief minister Usman Buzdar for losing all those by-elections in the province to PML-N. Thus Punjab, seemingly no longer the bastion of the Sharifs in the in the aftermath of the 2018 general elections, is remerging as their home ground.

The other day the prime minister flew in to Lahore to ask his CM, after all what went wrong? Buzdar, in his signature laconic style hemmed and hawed proffering very lame excuses for the dismal performance of the party in the province.

The powers that be want him out since long. But to no avail. His qilla (source of power) seem to so strong that no one can touch him.

Khan has already crossed the Rubicon so far as his tenure is concerned. Now it seems the mid-term blues have taken over. Perhaps here is a somewhat belated realisation that the PTI has failed to deliver on most of the tall promises it had made to the electorate before elections time.

A tell-tale indication of panic setting in was the sudden sacking of finance minister Hafeez Sheikh and induction of experienced banker and economist Shaukat tarin in his place. Only a week or so before, Tarin was ushered in while Khan was still all praise for Sheikh’s performance as finance minister.

Perhaps the innermost circle around the PM had succeeded in convincing him that while inflation was going up, the economy was going south, despite claims to the contrary by his various spokespersons.

Another blow to Khan has been loss of Jahangir Tareen as a trusted ally. Somewhat personal in nature, it has politically damaged the PTI as well. Already with a wafer-thin majority at the centre and as well in Punjab, the ruling coalition simply cannot afford to lose more.

Notwithstanding the ongoing sugar inquiry, the prime minister has to move swiftly to do damage control by bringing some of his estranged friends back on board.

First of all he has to get rid of a bevy of jokers clustered around him as ministers, SAPMs and advisors some of them, have caused more damage to the government through sheer buffoonery as well a lack of any experience.

Time is fast running out on him. The sooner the realisation, the better for him.