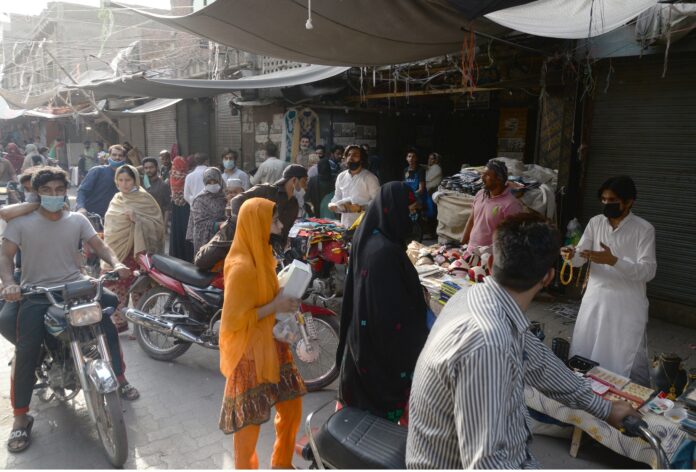 LAHORE: The authorities have failed to ensure implementation of coronavirus standard operating procedures (SOPs) in Lahore as most of the markets remained open on Saturday.

A survey conducted by Pakistan Today found that some of the city’s large and small markets remained open despite lockdown.

Mohammad Waqas, a mechanic at a local market near the Walton Road, informed that he is a motorcycle mechanic and did not close his workshop on any day.

“Not only my workshop is open in our market but all kinds of shops are open. Grocery stores and dairy shops are allowed, but shops of garments, sanitary, meat and some others are not closed. There is a lower middle class population living in extreme poverty. Now if we close the shops, how will we eat? I take every precaution on my part but in this market, people do not even like to wear masks,” he said.

Shergul Khan, a trolley driver in Ichhra Market, complained that the entire market was open but the local police kept on threatening him and telling him to return home. “All sorts of shops were open in the entire Ichhra Market. Marble, furniture, carpenters and other shopkeepers, including cloth merchants, kept their businesses open. Police patrol the market, take bribes from shopkeepers and leave without closing any shop. Closing a business does not make a difference to big businessmen, but a worker like us misses out on two meals a day. The government should also take concrete steps for our livelihood,” he said.

On the other hand, it was revealed that restaurants and cafes in some areas of the city were also open till late at Friday night. However, the district administration officials claimed that SOPs and lockdowns are being fully implemented.

Raiwind Assistant Commissioner Adnan Rasheed informed that he and his team raided a cafe on Friday night. “The cafe was open and a party was going on there. Our team arrested 11 people from there and registered an FIR. The operation was carried out at the Arman Centre in Johar Town,” Rasheed said.

Model Town Assistant Commissioner Ibrahim Arbab said his team had closed the entire Ichhra Market. “The market was crowded and the SOPs were not being implemented, which led to the immediate closure of the entire market,” he said.