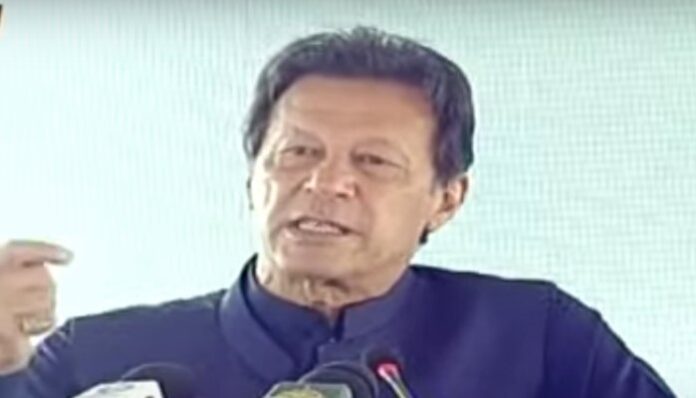 NOWSHERA: Prime Minister Imran Khan on Wednesday termed the provision of shelter to the common man as a basic responsibility of the state and said that the government’s low-cost housing projects would particularly benefit the weaker segment of society.

Addressing the foundation-stone laying ceremony of Jalozai Apartments for low-income groups, the prime minister said that the project was aimed at providing shelter to the underprivileged segment of society, particularly the working class and labourers.

He said that the government would provide a Rs300,000 subsidy on each house while the buyer would pay easy mortgage instalments to get the ownership rights.

He also said that with the government’s efforts, a long-delayed foreclosure law was settled that resulted in an agreement with banks on mortgage financing, which was the key factor in the materialisation of the project.

He urged the banks to further streamline their loan disbursement procedure, including training of the staff to facilitate the aspirants.

The prime minister mentioned that the Jalozai Apartments to be built on 9,800 kanal land would be given to the registered persons through balloting.

PM Imran stressed that caring for the poor and ensuring rule of law was in line with Islam’s first welfare State of Medina where Holy Prophet (Peace Be Upon Him) brought a revolution for mankind.

He maintained that no nation could prosper if it neglected its weaker segments and failed to ensure rule of law.

The rule of law, he said, was the main component of a strong society. On the other hand, a banana republic protects its powerful people only, he added.

The prime minister mentioned that the powerful elite in the country desire preferential treatment. Whether it be the alliance of the Pakistan Democratic Movement (PDM) or the sugar mafia, they want to evade the rule of law, the premier underscored.

“The nation does not become poor due to lack of resources, but where the rule of law could not be ensured,” he said.

PM Imran regretted that no government in the past gave attention to providing basic amenities to the common man including shelter.

He said that his government had enrolled people for low-cost housing units after conducting a proper survey.

He said that KP became the first province of the country for providing health insurance facility of up to Rs1 million to every citizen.

PM Imran said that the government would provide land to hospitals at cheaper rates to encourage them to expand the scope of medical treatment to the larger population.

He mentioned that shelter homes (Panahgahs) and mobile soup kitchens titled under project ‘Koi Bhooka Na Soye’ (Nobody should sleep hungry) were in line with the vision of the welfare State of Medina.

He directed the CM for demarcating the areas populated with labourers and workers for setting up such free shelter and food points.

KP Chief Minister Mahmood on the occasion said that the provincial government was vigorously pursuing the vision of Prime Minister Imran to provide low-cost and quality housing facilities to poor segment of the society.

The chief minister said that a total of 1,230 houses flat units would be constructed each having a cost of Rs.2.5 million on 150 Kanal lands in 18 months.

He said that these quality houses would be provided to poor people having a monthly income of 40,000 or below through draw.

The chief minister said that the KP government has started scores of housing projects and high-rise flats in different districts in Peshawar, Charsadda, Swat, Hangu and Mardan districts where three Marlas, five and seven marla houses would be constructed for the poor segment of the society.

The Memorandum of Understanding (MoUs) were signed for the construction of affordable and low costing housing units in these projects besides starting a housing scheme at Surizai Peshawar, he added.

He said that Peshawar Model Town was a mega housing project where affordable houses would be provided to low-income groups.

Meanwhile, addressing the inauguration ceremony of Peshawar-Dara Adam Khel road and the groundbreaking of Chitral-Shindur road, the prime minister said that proper infrastructure and roads would make the connecting areas a hub of tourism.

He said that Pakistan had immense potential in tourism, which if properly explored could greatly boost both foreign and local tourism.

He also said that the Peshawar-Dara Adam Khel road would connect up to western side and would facilitate travel through Peshawar and adjoining areas while the Chitral-Shindur road, which would later be linked to Gilgit would open up a new world of unexplored tourist places.

“The road will ensure easy access to the valleys, not only in trekking in summers but also skiing in winters, thus offering an amazing treat for the tourists,” he added.

He said that the country was blessed with serene natural beauty particularly its northern areas, however regretted that previous rulers spent their vacations in Europe and ignored the local tourist spots.

PM Imran said that properly worked-out road infrastructure and launch of telecommunication services would bring an economic boom to these areas.

He also said that the next step was development of resorts to cater to the influx of tourists.

He stressed carrying out geographical zoning of the tourist areas and ensuring proper bylaws by limiting the construction area of hotels and preserving the green pastures and prairies.

The premier said that Switzerland, the world’s top tourist destination with $80 billion earning from tourism, was half the size of Pakistan’s northern areas and even did not match its breathtaking natural beauty.

He said that Pakistan’s Malam Jabba was attracting tourist influx in winters and there were many more such places in the vicinity yet to be explored.

He called upon the masses to continue use of mask at public places to avoid the spread of coronavirus.

He recalled that after he had posted pictures of Kumrat valley, around 0.1 million people thronged the area in two weeks. However, he mentioned that due to lack of infrastructure, the beautiful area was littered.

He urged the involvement of local people in preservation of forests and maintaining cleanliness.

On agriculture, he said that a revolution would be witnessed with focus on plantation particularly the vegetation of olives and saffron, which would not only contribute to food security but also help earn revenue.

The prime minister said that he had issued directives to promote growing avocados in Islamabad for its land being quite fertile for the fruit.

He lauded KP CM Mahmood for the proper mapping of areas and demarcation of tourist spots.