On appeals to emotion

And why they are no good 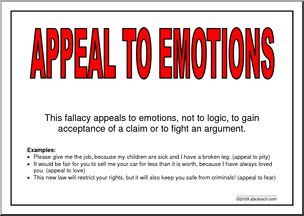 It is that part of the year again. The social media is buzzing with activity anticipating the fasting month. A recent post by a respected sheikh with a reasonably large following especially caught the eye. There is this unfortunate fact that men so often form opinions regarding the soundness of a view based on who it is coming from and not on its merits. Therefore, to keep any positive or negative bias out of it, I have chosen not to name the sheikh whom I quote below:

The Sheikh writes: ‘We laugh at those guys who put down the blaring volume of their rap tunes when they are driving past mosques – they seem so typical. We are amused at those women who spend their lives without hijab but suddenly decide to cover their heads in Ramadan or when they hear the Azan on TV – they seem so irrational. We think it’s silly how people can come to Jumm’ah once a week and miss every other prayer – they seem so illogical. We are confused by those who don’t read the Qur’an all year round but place it high out of reverence – they seem so weird. We are irritated by those who sin all year round but attend a yearly Mawlid and get excited at the mention of Rasūlullāh (peace be upon him) – they seem so lost.’

He continues: ‘That’s not typical, irrational, illogical, or hypocrisy. That’s adab, that’s love, that’s humility, and a sign of faith. It’s a clear sign that a light resides within the heart. If you don’t believe that honouring Jumm’ah, Ramadan, the Qur’an, and gatherings where Rasūlullāh (peace be upon him) are mentioned can change lives then you’re the lost one – not them.’

I have taken the liberty of quoting the whole thing because it so succinctly captures a common attitude – one which I feel it is very important to address. But first, let me acknowledge that the Sheikh makes some good points, to which one cannot help nodding in agreement. It is never good to laugh at anybody. Also, lowering the music volume near mosques – and I dare add churches, temples, hospitals, schools, and homes – is basic human decency. One must never be a nuisance to anybody.  I would stick my neck out and say that liking rap in itself calls one’s good taste into question, although here some might disagree with me.

Views like the Sheikh’s are popular because they are couched in words that sound very tolerant and non-judgmental, something very fashionable in the politically correct world we live in. At least that is how they start, although there is often a change of tone somewhere along the way. Notice the way this one ends (‘… then you’re the lost one…’) – doing precisely what it set out to criticise. But this is a mere quibble, raised merely for the record. Arguments are best countered on principle rather than by citing minor shortcomings.

Respect’ sometimes takes curious forms, some of them so peculiar that they leave one wondering what the words ‘honour’ and ‘revere’ mean any way. I have had the misfortune of hearing a small-time bootlegger announcing to a crestfallen customer: ‘I don’t deliver in Ramadan. Please come back after Eid.’ Admittedly, this sort of thing is a far cry from the harmless practices mentioned by the Sheikh. But the question is where to draw the line. These slopes are notoriously slippery.

Despite some valid points which I have acknowledged above, where this narrative is faulty – and it is a classic example of a certain kind of self-congratulatory view – is that it is based essentially on emotional arguments. That is, it makes an appeal to emotions, as opposed to rationality. Many people tend to picture themselves and their reverence for their religion when they hear them. Any wonder they love what they hear?

For an argument to be valid, it must have something more than the fact that it is emotionally soothing. The problem with emotional arguments is that they can be made to appeal to other people’s emotions as well, which may be very different from one’s own. For example, those who hold the Quran aloft for the bride to pass under it could justify the practice by claiming that it is their way of giving respect to the Quran, or getting the new couple blessed or any such variant of the appeal to emotions. It is too bad if you happen not to be moved by a particular shade of emotion, but there would be those who relate to it. We are all moved by different sets of emotions and that is why emotions are a bad foundation to build a philosophy on.

‘Hijab’ is a grossly misunderstood issue, which I have discussed in detail in an earlier article entitled, ‘Hijab or purdah’. Suffice it to say here that that whole debate comes under the category of etiquettes for mixed company and has nothing whatever to with azan or Ramadan. It is easy to lose sight of the role culture and traditions play in our lives. Women covering their heads when they hear sound of the azan or the Quran is a very sub-continent thing. More power to them, for it is things like this that set one culture apart from another and add to the diversity and therefore the beauty of the world. But at the same time there is hardly anything ‘noble’ in the practice. To put covering of the head in perspective, there was a time in the subcontinent when it was considered unthinkable for respectable men not to wear a cap in public.

It is imperative to keep re-examining from time to time one’s arguments and their applications. If a conflicting view is encountered, or if somebody points out a discrepancy, one could do worse than to consider it with an open mind.

‘Respect’ sometimes takes curious forms, some of them so peculiar that they leave one wondering what the words ‘honour’ and ‘revere’ mean any way. I have had the misfortune of hearing a small-time bootlegger announcing to a crestfallen customer: ‘I don’t deliver in Ramadan. Please come back after Eid.’ Admittedly, this sort of thing is a far cry from the harmless practices mentioned by the Sheikh. But the question is where to draw the line. These slopes are notoriously slippery.

Was the Quran revealed for men to ‘revere’ it or to benefit from it after understanding and implementing it in their lives? What is Ramadan for? The Quran has very clear verdicts on these issues. The problem is that some are not interested in the contents of the Quran in the first place – they are too busy ‘honouring’ it.