• Board exams pushed to third week of May, Cambridge assessments to follow schedule • On-campus classes of grades from 9-12 to resume from April 19 • Universities in hotspots to continue holding virtual classes • Punjab extends school closure till Eid; Sindh to resume academic activities from 22nd 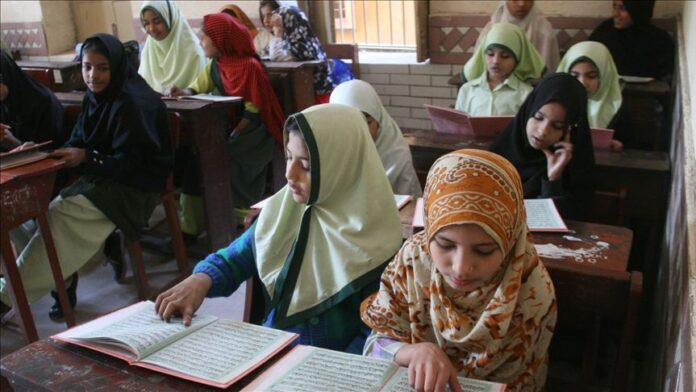 ISLAMABAD: A meeting of the National Command and Operation Centre (NCOC) on Tuesday decided to keep in-person classes for students in grades one to eight suspended until April 28 in Covid-19 hotspots.

Last month, the government had closed down all educational institutions in several major cities and Islamabad initially for two weeks but later extended until April 11 after a surge in Covid-19 cases there.

On Tuesday, a meeting of the NCOC — chaired by Minister for Planning and Development Asad Umar and attended by federal and provincial education and health ministers — was held to decide on the reopening of schools.

“It was decided that in districts affected by the pandemic, in-person classes will remain suspended for students in grades 1 to 8 until April 28,” said Minister for Education Shafqat Mahmood in a press conference after the meeting. “It must be remembered that not every district is a coronavirus hotspot.”

“For example, the Punjab education minister informed the meeting that he has 13 districts that have been affected. Therefore, in these 13 districts classes for grades 1 to 8 will not require the physical presence of students,” he said.

“The provinces will decide which areas are the most affected and where this will be implemented.” The minister said that this decision will be reviewed again on April 28.

The Sindh government on Sunday suspended on-campus classes from grade one to eight in all public and private schools for 15 days starting April 6. Recalling the development, Shafqat said that Khyber Pakhtunkhwa (KP) has done the same.

He said that further consultations will be held whether the on-campus classes will remain suspended until Eid or should they be resumed “in some staggered way”.

Classes from nine to 12 will be held under strict compliance with coronavirus guidelines from April 19 onwards, so that these students can complete their preparation for their upcoming final assessments.

“Universities in affected districts will also remain closed and classes will be held online,” he said, adding that in other districts, universities will remain open and function as normal.

Last week, Shafqat had announced that board examinations would take place according to their timetable as giving students the “baseline” grade was no longer an option.

“The exam situation will also be discussed [during the NCOC meeting],” he said in a tweet sent on Sunday. “Whatever is decided will be a collective decision of the country’s health and education authorities & NCOC.”

Education and Health Ministers will meet at the NCOC Tuesday to decide whether to open or further close educational institutions. The exam situation will also be discussed. Whatever is decided will be a collective decision of the country’s health and education authorities & NCOC

He said on Tuesday that approximately 4 million students across the country give the board exams. “It was decided that exams for grade 9, 10, 11, and 12 will be held, but because they are our own, they will be pushed to the third week of May,” he said.

Shafqat further said that the date sheet announced by Punjab would also be revised so that the coronavirus situation is under control and children have time to prepare. “All provinces and boards have given separate timetables. But nothing will happen before May 24.”

The assessments for O- and A-Level students will proceed as scheduled, as these can be managed with guidelines and are unlikely to attract very large numbers, the minister said.

Separately, Punjab Education Minister Dr Murad Raas announced on Twitter that classes 1 to 8 for all public and private schools in certain cities of Punjab will remain closed till Eidul Fitr.

Dr Raas identified the cities where the schools will stay closed and these include Lahore, Rawalpindi, Gujrat, Gujranwala, Multan, Bahawalpur, Sialkot, Sargodha, Faisalabad, TT Sindh, Rahim Yar Khan, DG Khan and Sheikhupura. As per the federal government’s decision, the situation will next be reviewed in two weeks, he said.

Giving an update for students of classes nine to 12, Dr Raas said that schools for these classes will be open only Monday and Thursday, starting April 19.

Examinations for classes nine through 12 and O/A Levels will, however, be held as per schedule in Punjab, he wrote.

Meanwhile, Sindh Education Minister Saeed Ghani said that academic activities will be resumed from April 22 across the province.

Ghani said in a statement that the Sindh government had already made the announcement to halt regular classes from Class 1 to 8, however, the educational activities will be restored from April 22.

The district administration has the power to make its own decisions after witnessing a rise in coronavirus cases. He said that the pandemic situation is under control in Sindh as no district is specifically affected by the virus.

The education minister said that the positivity rate of Covid-19 cases in educational institutions stands at 2.6 per cent. He announced that the academic process from Class 9 to 12 will be continued and examinations will be held as per schedule.

Ghani reiterated that no student will be promoted to the next level without appearing in the examinations.

Meanwhile, the Sindh government has decided to vaccinate inmates in all prisons across the province from Wednesday.

Sindh Health Minister Azra Fazal Pechuho has said that in the first phase of the drive, prisoners in the age group of 50 and above will be vaccinated.

Coronavirus infections have been on the rise since March, prompting the authorities to reinstate the restrictions in March.

The country reported 3,953 new coronavirus cases and 103 deaths on Tuesday, which took the tally to 696,184 and the death toll to 14,924. It is facing a surge in coronavirus disease cases, which the government has said is worse than last year’s outbreak when a nationwide lockdown was imposed.

Prime Minister Imran Khan on Sunday once again ruled out a general lockdown while acknowledging the country was going through a third wave of the pandemic.

“We have so far been protecting our people, we are not imposing a lockdown [or] closing our factories. We are only imposing minor restrictions so that this wave does not spread rapidly,” he told the public during a question-and-answer session broadcasted live.

“But if it continues to spread like this, it will have a very negative impact and we will be forced to take strict steps.”

“We have to adopt a balanced policy where the spread of the virus can be prevented and where the poor man and the country’s economy are least affected,” he said.

The government has opted for “smart lockdowns” — short-term restrictions imposed often at neighbourhood level — to try to tame the disease while keeping the economy afloat.

It launched a Covid-19 vaccination for the general public on March 10, starting with older people.

The drive began with a focus on the oldest people in the community, generally over the age of 80. “We will work our way down in coming days,” Dr Sultan had told Reuters.

Pakistan has not secured any supplies from vaccine manufacturers and is largely depending on the GAVI/WHO COVAX initiative for developing nations and donations from old friend China.