Educational institutions in Sindh and Balochistan to remain open 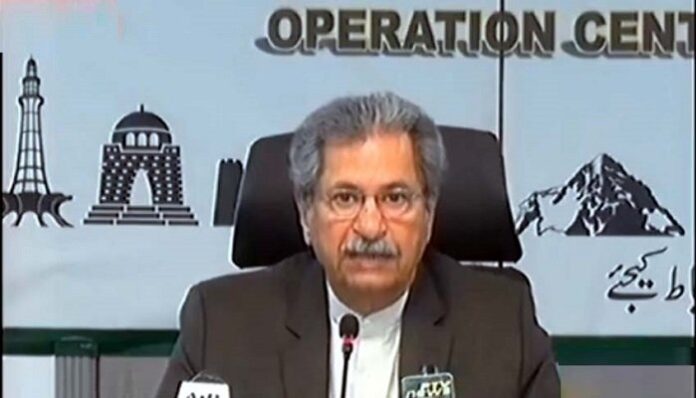 ISLAMABAD: Federal Minister for Education and Professional Training Shafqat Mahmood on Wednesday announced the extension in educational institutions closure till April 11, in the high-risk areas and specific districts of the country keeping in view the spike in prevalence of the novel coronavirus.

Addressing a press conference after holding an important meeting of provincial education and health ministers at the National Command and Operation Centre (NCOC) to review the spike in current wave of the pandemic, he said that more educational institutions could be closed in high-risk areas and selected districts as per discretion of the provinces.

The prevalence of disease in the Balochistan, Sindh and Gilgit-Baltistan (GB) had relatively low as compared to the ICT, Punjab, and KP, he said, adding that all those matters were being considered in detail during the NCOC meeting.

“We are cognisant of the fact that the closure of educational institutions time and again were causing students loss but their health was top priority and the government would not make any compromise on it,” he maintained.

Announcing the government’s decision regarding annual examinations of matric and intermediate, he said that during the NCOC meeting the consensus was built on the final examinations that they would be held as per prescribed schedule.

He said that O and A levels Cambridge examinations were scheduled from April 26 and “we are going to hold a meeting with Cambridge authorities for postponing the examinations due to upward trend in the pandemic and the decision in that regard will be made afterward”.

Shafqat said that provinces were permitted to operate staggered classes in low-risk districts. A final review would be made after viewing overall situation with health and education ministers on April 7, he said, declaring that if some academies violating closure orders would be sealed.

The government, earlier, announced to close the educational institutions from March 15, to 28, keeping in view the burgeoning Covid-19 cases in the wake of third wave of the deadly virus.

Similarly, KP Education Minister Shahram Khan Tarkai on Wednesday said that closing of educational institutions in all notified districts extended to April 11, 2021, according to the guidelines of NCOC.

In a statement issued on Wednesday, the provincial education minister said that all educational institutions, both private and public, would be closed till April 11 in the notified districts including Peshawar, Mardan, Nowshera, Swabi, Charsadda, Kohat, Swat, Malakand, Lower Dir and Buner.

He said that educational activities have also been suspended in Buner due to increasing cases of coronavirus. Thus, the districts where the number of corona cases will increase will also be closed immediately till April 11.

Shahram said that in all the districts where schools have been kept open, the administration has been strictly directed to strictly implement standard operating procedures (SOPs) there.

He added that the provincial government is monitoring the educational institutions ourselves and no negligence will be tolerated in this regard.

To a question about board exams, he said that that there will be exams this year and we pray that the situation will be under control till the exams.

On the other hand, Sindh Education Minister Saeed Ghani said that all educational institutions in the province will remain open under strict coronavirus related SOPs.

The education minister said that schools can remain open with only 50 per cent attendance and if a coronavirus case is found in a school, only that institution will be sealed. He further announced that all examinations will be held as per the schedule.

He added that all private and public schools will follow government orders and warned that a strict action will be taken against institutions as well as individuals found violating the official guidelines.

Furthermore, Balochistan on Wednesday decided against closing the schools and other educational institutions.

Parliamentary Secretary for Health Dr Rubaba Buledi said that the ratio of positive cases of Covid-19 in Balochistan, has been between 3 per cent to 3.8 per cent.

In all regions of the province, officials monitoring coronavirus spread, Rubaba Buledi said. “The situation of the pandemic has been under control in the province with no smart lockdown in any area,” the parliamentary secretary said.

“We are not in favour of closing the schools and other academic institutions,” Buledi said.

“The government will ensure strict enforcement of the standard operating procedures (SOPs) in the province,” the official added.