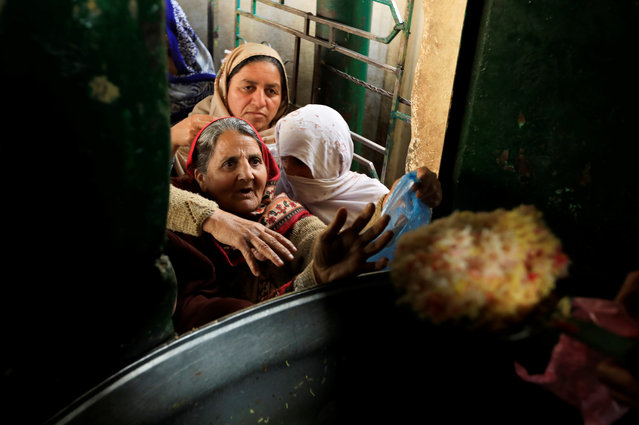 ISLAMABAD: Aftab Khan, 46, has been selling mobile phone accessories near a bus stand in Rawalpindi city for almost a decade.

Originally from Swabi district, Khan said that he makes some Rs1,000-1,200 a day and sends most of the earnings back to his six-member family in Swabi.

“I would hardly make ends meet with this amount, but the outbreak of Covid-19 in the country last year has made the situation even worse as I could not earn enough money to support my family due to ensuing lockdowns and halt of businesses,” he said.

Under such circumstances, Khan said he had been struggling to afford quality food for himself as he would send a major chunk of the income to his family. Thanks to the recently launched hunger-free initiative, he can now have freshly-cooked and free-of-cost food.

“I used to spend around Rs300 on food per day, but recently I am getting free food from food trucks roaming in the city. I feel elated that by the end of this month I would be able to send back more money,” he said.

The government has recently kicked off a “no one goes to sleep hungry” initiative under the Ehsaas programme, a major poverty alleviation initiative of the government benefiting millions of poor across the country.

“There are many areas in Pakistan where people go to bed hungry. Most people are on daily wages and when they don’t get their wages, they have to sleep empty stomach,” Prime Minister Imran Khan said while addressing the launching ceremony in Islamabad.

The initiative would help the poor, deserving, and daily wagers to save their hard-earned money to fulfill the needs of their children and families instead of spending it on food items, the prime minister said.

The needy individuals will be able to feed themselves twice a day at various points including near hospitals, bus stations and public places, Special Assistant to the Prime Minister on Poverty Alleviation Dr Sania Nishtar said, adding that the programme has initially been started in Islamabad and Rawalpindi and would be scaled up soon to other areas of the country.

Private donors would also be able to contribute towards the poor-centric programme, and the government has set up a donor coordination group within the Poverty Alleviation and Social Safety Division of Pakistan to engage with the benefactors to make it more financially stable, Dr Sania told Xinhua.

Lauding the all-out efforts made by the government for the most vulnerable and marginalised sections of the society, Talat Anwar, a renowned economist and former advisor on macroeconomic policy at the Ministry of Planning, Development and Special Initiatives, said that the programme will bring a positive change to the people as it is in line with the global model for reducing poverty.

“For vulnerable communities, setbacks like the Covid-19 pandemic has brought incredible difficulties in the form of job loss, rising prices, disruptions in supply chains, loss of remittances, education and health services.” Taking care of the vulnerable groups is the primary responsibility and obligation of the governments towards the achievement of optimal social protection and minimum social exclusion, the economist told Xinhua.

In a conversation with Xinhua, Bashir Farooqui, chairman of Saylani Welfare Trust, the country’s largest non-governmental organisation working for the welfare of poor and destitute, said that in compliance and realisation of its responsibility towards the common people, the government has been working strenuously for their welfare and well-being.

“Poor people are now feeling owned by the state as they have been given due care by the state,” he said.

Farooqui was of the view that providing shelter and food has greatly lessened the burden of the poor but he also stressed the government should take a leap forward to make their lives even better by imparting education and required skills so they can make their own way in the society.

This feature first appeared on Xinhua

The Pakistan Muslim League-N’s (PML-N) baffling directions to lawmakers helped the speaker of the Punjab Assembly avoid a no-confidence motion pending against him on...
Read more
- Advertisment -

May 23, 2022
ISLAMABAD: China on Monday said that no matter how the international landscape may evolve, China-Pakistan relations will remain unshakable. Wang Wenbin, a spokesperson of the...

Youngsters to get a chance against Sri Lanka: Bismah Maroof