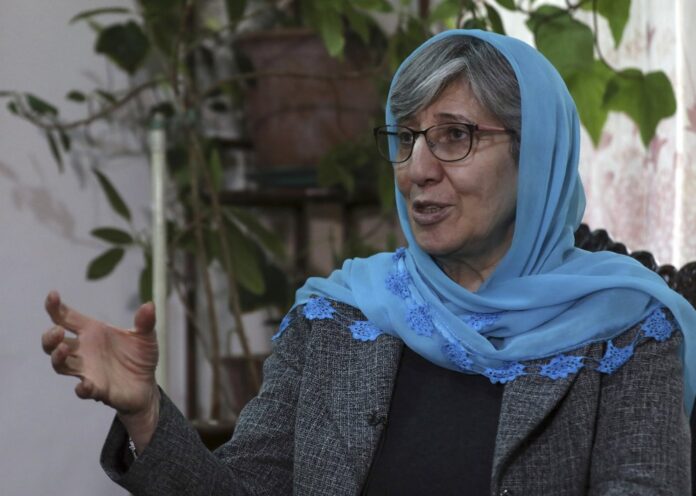 KABUL: Prominent activist Sima Samar has been fighting for women’s rights in Afghanistan for the past 40 years. She believes her struggle is far from over — especially at a time when violence is on the rise, peace talks between rival Afghan groups are stuck and the US mulls a May departure from her country.

Samar, 64, worries about the future, noting that insecurity and instability in Afghanistan have reached frightening levels.

“No one knows what will happen tomorrow,” she said in an interview at her home in the Afghan capital, Kabul, protected by blast walls, guards and a German shepherd, who races to his vantage point overlooking the street when a car even slows as it passes.

Yet much is at stake and “a lot of sacrifices have been made in these 20 years,” she said, reflecting the anxiety among civil society leaders as the US searches for the best exit from its longest war.

Under a 2020 deal between the Taliban and the Trump administration, all US troops are to leave Afghanistan by May 1. The Biden administration says it’s reviewing the deal, suggesting it may not meet the deadline.

Last week, Samar and other civil society representatives participated in a Zoom call with US peace envoy Zalmay Khalilzad. He assured them that Washington stands with Afghanistan’s civil society to protect the gains made in the past 20 years.

The call seemed last-minute to Samar — held just before Khalilzad was leaving Kabul for Qatar to meet with Taliban negotiators, following two days of face-to-face meetings with political leaders and warlords-turned-politicians.

“I feel a little like history is repeating itself,” said Samar, questioning the prominence given again to warlords and a political leadership that struggles to win over the trust of Afghans.

When the Taliban regime was ousted in 2001 by the US-led coalition she had pressed for justice — that those who had committed crimes in previous regimes should be punished, that accountability, equality and justice should be given priority.

At that time she warned in vain against having warlords — who had participated in the 1990s civil war and destroyed much of Kabul — in prominent roles in a post-Taliban administration. She received death threats and was targeted in a slander campaign as “Sima Samar, the Salman Rushdie of Afghanistan.”

“I am not saying everyone has to go to jail but a crime is a crime,” she said. “They should be at least brave enough to say ‘I am sorry.’ That’s a start.”

Samar said Afghanistan needs involvement by the international community going forward, to make sure that promises made are kept and that cease-fires are monitored independently. Culprits should be punished, she said.

The immediate question on the minds of many is who is systematically targeting and killing members of civil society. The Islamic State group has claimed several attacks. The Taliban have denied involvement in most incidents. The government and the Taliban often blame each other.

The number of targeted killings tripled last year, according to Afghanistan’s Independent Human Rights Commission, which Samar launched and headed from 2002 to 2019.

“It is like taking the rarest pearls from our midst,” said Torek Farhadi, an analyst and former Afghan government adviser.

In recognition of International Woman’s Day on Monday, US Secretary of State Antony Blinken is awarding six Afghan women, who were among those killed last year, with the International Women of Courage award.

“These tragic murders underscore the alarming trend of increased targeting of women in Afghanistan and the United States condemns these acts of violence,” Blinken said ahead of the ceremonies.

Blinken also proposed steps to help jumpstart the stalled peace process between the government and the Taliban, according to his letter to Afghan President Ashraf Ghani published Sunday by Afghanistan’s TOLONews.

The letter calls for bringing the two sides together for a UN-facilitated conference with foreign ministers and envoys from Russia, China, Pakistan, Iran, India and the US “to discuss a unified approach to supporting peace in Afghanistan.”

Samar said much has been gained in the 20 years since the Taliban were ousted. Schools for girls are open. Women entered the workforce, politics, became judges — they are even at the negotiating table where the Taliban and the Afghan government are struggling to find a way to end the war.

But the gains are fragile and human rights activists have many enemies in Afghanistan — from militants and warlords to those who want to stifle criticism or challenges to their power.

Afghanistan is second only to Yemen as the worst place in the world to be a woman, according to the 2019 Women, Peace and Security Index, compiled by the Georgetown Institute for Women Peace and Security and the Peace Research Institute in Oslo. The illiteracy rate among Afghan women is 82% and most of the women in Afghan prisons are jailed for so-called “moral” crimes like seeking a divorce.

The road to justice and equality remains long, said Samar, who became an activist as a 23-year-old medical student with an infant son. At the time, the then-communist government arrested her activist husband, and she never saw him again.

Samar, who says discrimination based on ethnicity and gender is still widespread, is a member of Afghanistan’s minority Hazaras, who have faced discrimination for centuries. They are mostly Shia Muslims in a majority Sunni Muslim Afghanistan and most often the target of Islamic State militants in recent years.

Despite the persistent challenges, Afghanistan of 2021 is different, said Samar, a recipient of numerous awards who during a recent visit wore a T-shirt proclaiming “this is what a FEMINIST looks like.”

Human rights, women’s rights and the rights of minorities are now at least being discussed. “At least we speak about violence against women now. Before it was not an issue in this country, except for some crazy ones like me,” she said.

Afghanistan National Security Adviser (NSA) Hamdullah Mohib has said that Kabul needs to reach an understanding with Islamabad on outstanding issues in order to bring out peace and end the war in the country.

Adressing a news conference with senior Afghan security officials in Kabul, Mohib said that the Ashraf Ghani-led government has taken all necessary steps to establish peace. He maintained that the Afghan government was waiting for the Taliban to prove that they too want peace.

Regarding the draft proposal sent to the Afghanistan government on the peace process by US special envoy on Afghanistan Zalmay Khalilzad, he said: “Khalilzad’s new plan is not a plan of the US government, but a plan to accelerate the peace process, and it is more structured and focused on the division of power in order to solve security problems”.

While highlighting the fact that there are teams in Doha for peace talks, Mohib stated “if the violence continues, Afghan forces are fully prepared to contain their attacks”.

Afghan officials and Western diplomats have told Reuters that during Khalilzad’s recent visit to Kabul he discussed the idea of an interim government after bringing Afghan leaders together for a multilateral conference outside the country.

A Taliban spokesman in Doha also acknowledged that the group has received a proposed draft plan for the peace process and were reviewing it.

Ghani has strongly opposed the idea of the interim government and said any new government should be formed through elections.