Cooperation should be the goal in the interest of the global community, says Wang 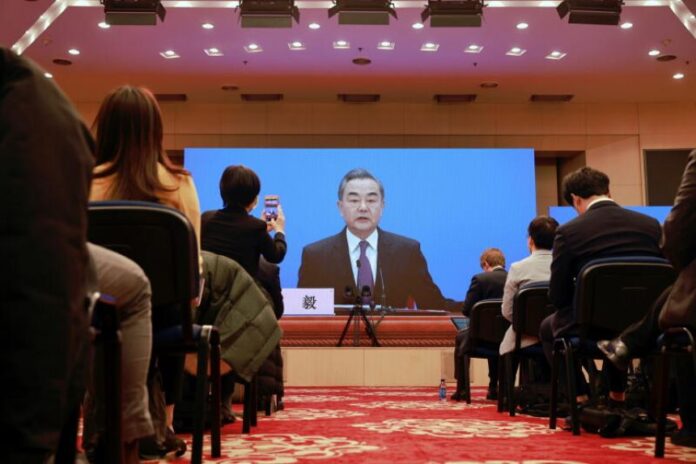 ISLAMABAD: Chinese State Councilor and Foreign Minister Wang Yi on Sunday said that improvements to Hong Kong’s electoral system were necessary to ensure stability, urged US President Joe Biden to make a “clear departure” from his predecessor’s approach to the Taiwan region and dismissed allegations of genocide in Xinjiang as “a lie through and through.”

Speaking via video-link from the Great Hall of the People in Beijing, which was facilitated by the Chinese Embassy in Islamabad, Wang covered a wide range of hot issues as he answered questions from journalists of the global media on the sidelines of the fourth session of the 13th National People’s Congress (NPC).

Ties between China and the US deteriorated during the Trump administration to a level Wang had previously described as their lowest point since relations were formally established in 1979, but the foreign minister expressed hope that ties could be reset “on a new path of healthy and steady growth.”

He acknowledged that differences and disagreements were inevitable, but urged “candid communication to prevent strategic miscalculation and avoid conflict and confrontation.”

“In the interest of the two countries and the whole world, cooperation should be the main goal for both China and the United States,” he added.

Wang noted that Chinese President Xi Jinping and Biden held a call on Chinese New Year’s Eve, during which the two heads of state “pointed the way forward for bringing the relationship back on track.”

“We are ready to work with the United States to follow through on the outcomes of this important phone call, and set China-US relations on a new path of healthy and steady growth,” Wang said.

“We hope that the United States will move in the same direction and remove all its unreasonable restrictions on bilateral cooperation as early as possible, not create new obstacles.”

On the Iran nuclear deal, Wang urged the United States and Iran to “move forward in a step-by-step and reciprocal manner.”

He called on the US to “demonstrate sincerity” by quickly removing unilateral sanctions and “the ‘long-arm jurisdiction’ on third-party entities and individuals.”

He also welcomed the US return to the Paris Climate Agreement, adding that ‘protecting the environment is not a choice to make, but a call we must answer.”

However, he added, the US “has been wilfully interfering in other countries’ internal affairs” in a way that has sometimes led to “turbulence and conflict” – he warned peace in the world will remain elusive unless the US recognises this.

The backdrop of the press conference was the Covid-19 pandemic, and Wang highlighted China’s efforts to offer assistance to countries around the world.

“Everyone is obligated to help those in need even if there is only one case of infection left,” the foreign minister said, adding that “whether it is a Chinese vaccine or not, it is a good vaccine so long as it is safe and effective.”

‘CHAOS TO STABILITY’ IN HKSAR:

Wang reiterated the words of other top officials at the Two Sessions, calling on Hong Kong to be governed by patriots and stressing a need to improve the special administrative region’s electoral system.

Chinese lawmakers began deliberating a draft decision on improving the electoral system of the Hong Kong Special Administrative Region on Friday at the fourth session of the 13th NPC.

“The move to improve Hong Kong’s electoral system and ensure ‘patriots administering Hong Kong’ is necessitated by the need to advance ‘One Country, Two Systems” cause and maintain long-term stability in Hong Kong,” Wang said.

“How can we expect someone who does not love his motherland to truly love Hong Kong? Loving Hong Kong and loving the motherland are consistent requirements.”

The foreign minister said that a “shift from chaos to stability fully” benefits both Hong Kong residents and foreign investors, adding that “we have the confidence to usher in a brighter future for Hong Kong.”

NO COMPROMISE ON TAIWAN:

While addressing the Taiwan issue, Wang stressed that the region is an inalienable part of China and the two sides of the Taiwan Straits “must be and will surely be reunified.”

He went on to urge the United States to abide by the one-China principle, warning that “on the Taiwan question there is no room for compromise.”

“The one-China principle is the political foundation of the China-US relationship, a red line that should not be crossed,” the foreign minister said. “On the Taiwan question, there is no room for compromise or concession from the Chinese government.”

The foreign minister went on to urge the Biden administration to mark a “clear departure” from the previous White House’s approach to Taiwan.

“We hope the new US administration will appreciate the great sensitivity of the Taiwan question and will abide by the one-China principle and the three Sino-US communique.

“We would hope to see a clear departure from the previous administration’s dangerous practice of crossing the red line and playing with fire, and we hope that the Taiwan question will be handled prudently and properly,” he maintained.

“Speaking of genocide,” he said in response to a question about the allegations, “many people would have in their minds the Native Americans of the 16th century, African slaves of the 19th century, the Jewish people of the 20th century and the aboriginal Australians who are still struggling even today.

“The claim that there is genocide in Xinjiang couldn’t be more preposterous. It is just a rumour fabricated with ulterior motives, and a lie through and through.”

The Uygur population has grown rapidly, Wang said, criticising people who make comments about Xinjiang but have never visited the region to see it for their own eyes.

“Some Western politicians chose to believe in the lies made up by a few, instead of listening to the voice of 25 million Xinjiang residents of various ethnic groups. They chose to dance with the few anti-China elements in their clumsy dramas, instead of acknowledging the progress in Xinjiang.

“This only shows that they do not care about the truth. They are only interested in political manoeuvring, and creating the so-called Xinjiang issue to undermine security and stability in Xinjiang and hold back China’s development.”

China welcomes people from around the world to visit Xinjiang, he said, adding that seeing is believing and the best way to debunk rumours.

CHINA AND INDIA ‘NOT RIVALS’:

China and India have broad common interests and tremendous potential for cooperation, Wang said, but they need to treat one another as friends, not rivals, and “help each other succeed instead of undercutting each other.”

The rights and wrongs of the border violence that erupted last year are clear, he said, adding that the dispute clearly showed “that initiating confrontation will not solve the problem, and that returning to peaceful negotiation is the right way forward.”
China-Africa relations.

Wang, who began China’s diplomatic year with a five-nation tour of Africa, described China and Africa as “perpetual good friends and good partners with a shared future.”

“China-Africa cooperation stands as a model of South-South Cooperation and a fine example of international cooperation with Africa,” the foreign minister added.

The next forum on the China-Africa Cooperation summit is scheduled to take place later this year in Senegal, and Wang said that China will support Africa’s efforts to defeat the virus and also cooperate with countries on the continent on the Belt and Road Initiative.

“Countries in the region and around the world can all see clearly in recent years that the factors of instability and security risks in the South China Sea come mainly from outside the region,” he added.

Wang stressed China’s friendship with the people of Myanmar and urged “calm and restraint” in the country, where the military took over the government at the beginning of February.

“The immediate priority is to prevent further bloodshed and conflict, and ease and cool down the situation as quickly as possible.”

“No matter how the situation evolves, China will not waver in its commitment to advancing China-Myanmar relations, and will not change the course of promoting friendship and cooperation.”

CHINA AND EU ‘NOT SYSTEMIC RIVALS’:

China and the European Union agreed on the terms of a Comprehensive Agreement on Investment in the final days of 2020, and Wang said that in the face of challenges, relations between China and the EU “have demonstrated resilience and vitality.”

China and Europe “are not systemic rivals,” he added, and China will continue to support European integration.

“China and Europe are two important players in this multi-polar world. Their relationship is equal and open, not targeting any third party or controlled by anyone else.”
Japan

Wang, a former ambassador to Japan, said that China and Japan must not be distracted by single events if ties between the neighbours are to become “more mature and stable.”

“I hope that Japanese society will embrace a more objective and rational perception of China so as to solidify public support for long-term steady progress in China-Japan relations,” the foreign minister added.

With Tokyo scheduled to host the delayed Summer Olympic Games this year and the Winter Olympics heading to Beijing in 2022, Wang said that the countries “have every reason to support each other in hosting the two grand events, and make the Olympics a platform for deepening friendship between the two peoples and an opportunity for furthering the relationship between the two countries.”

Wang praised the role of China in the United Nations, 50 years after the general assembly restored the People’s Republic of China’s seat in the organisation.

“China champions equity and justice, and stands for equality among all countries regardless of their size,” he said in response to a question from CGTN’s Tian Wei. “China’s vote in the United Nations always belongs to the developing world.”

“The United Nations is not a club for big or rich countries. All countries enjoy sovereign equality, and no country is in a position to dictate international affairs.”

2021 is also the 20th anniversary of China’s accession to the World Trade Organisation (WTO). Wang said that four important lessons had emerged over the past two decades.