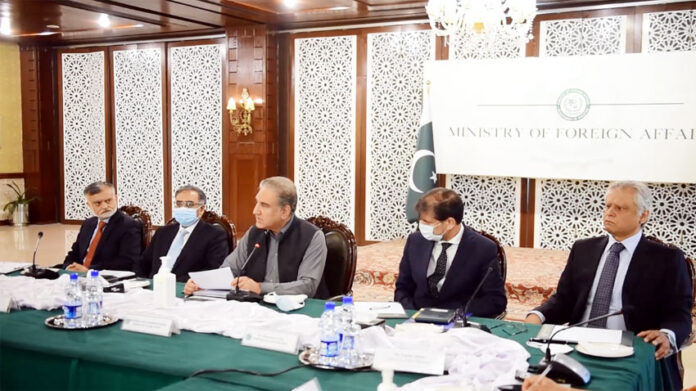 He said this while talking to the envoys of European countries in Islamabad on Thursday. The foreign minister highlighted that there are a great number of investment opportunities in Pakistan.

He said that despite Covid-19, there has been a significant increase in the investment portfolio from European companies to Pakistan. He expressed satisfaction that bilateral trade has also improved.

The FM said that a plan is being prepared in order to make the joint economic commissioners with the European countries more vibrant and effective. He added that the government is providing every possible facilitation to entrepreneurs from Europe.

Referring to the Roshan Digital Account, he said that the expatriate Pakistanis have sent $500 million to Pakistan through this initiative in the last few months.

He also said that both sides need to evolve a joint strategy to remove hurdles in the way of bilateral trade. He added that institutional cooperation is a must to further strengthen the bilateral relationship.

Earlier, Foreign Minister Qureshi expressed satisfaction over the Norwegian investment in Pakistan. During his telephonic conversation with Norwegian counterpart Ine Eriksen Søreide, the FM appreciated the growing business relations between Pakistan and Norway.

The foreign minister of Norway appreciated the role of the government of Pakistan in facilitating the signing of a solar power project between Scatec and Nizam Energy.

She also lauded the constructive role of Norwegians of Pakistani origin in the economic development of Norway.

The two foreign ministers also exchanged views on enhancing cooperation in diverse sectors such as trade, investment and clean energy. On Afghanistan, Qureshi underscored that there was no military solution to the conflict.

He briefed his Norwegian counterpart on Pakistan’s positive contribution to the Afghan peace process and expressed the hope that the Afghan leaders would seize this historic opportunity to secure an inclusive, broad-based and comprehensive political settlement.