Every choice and move we make today will shape the world of the future, says Xi 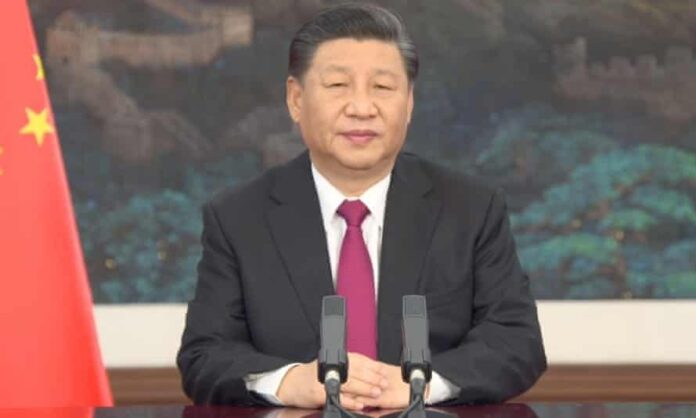 ISLAMABAD: Chinese President Xi Jinping has expounded on China’s stance over how to improve multilateralism against the backdrop of the Covid-19 pandemic and world economic recession, when attending his first international virtual gathering in 2021.

“Every choice and move we make today will shape the world of the future,” said Xi in his special address at the World Economic Forum (WEF) Virtual Event of the Davos Agenda in Chinese capital, Beijing, on Monday.

Noting that the problems facing the world are intricate and complex, Xi said that the way out of them is “through upholding multilateralism and building a community with a shared future for mankind.”

“Multilateralism is about having international affairs addressed through consultation and the future of the world decided by everyone working together,” Xi said.

The Chinese president called on the international community to say no to narrow-minded, selfish beggar-thy-neighbour policies, and stop unilateral practice of keeping advantages in development all to oneself.

“Multilateralism should not be used as pretext for acts of unilateralism. Principles should be preserved and rules, once made, should be followed by all,” Xi said.

“Decision should not be made by simply showing off strong muscles or waving a big fist,” he said, adding that “selective multilateralism should not be our option.”

Each country is unique with its own history, culture and social system, and none is superior to the other, he said, reiterating that “no two leaves in the world are identical, and no histories, cultures or social systems are the same.”

“State-to-state relations should be coordinated and regulated through proper institutions and rules. The strong should not bully the weak,” he said.

Moreover, he said scientific and technological advances should benefit all humanity rather than be used to curb and contain other countries’ development.

Xi urged abandoning arrogance and isolation mindsets, saying that “we have been shown time and again that to beggar thy neighbour, to go it alone, and to slip into arrogant isolation will always fail.”

LOOKING TO FUTURE TO UPHOLD MULTILATERALISM

He called on the international community to stay committed to openness and inclusiveness, to international law and international rules, to consultation and cooperation, and to keeping up with the times instead of rejecting change.

“History and reality have made it clear, time and again, that the misguided approach of antagonism and confrontation, be it in the form of cold war, hot war, trade war or tech war, would eventually hurt all countries’ interests and undermine everyone’s well-being,” he said.

“To uphold multilateralism in the 21st century, we should promote its fine tradition, take on new perspectives and look to the future. We need to stand by the core values and basic principles of multilateralism. We also need to adapt to the changing international landscape and respond to global challenges as they arise. We need to reform and improve the global governance system on the basis of extensive consultation and consensus-building,” he said.

Xi urged to give full play to the role of the World Health Organization in building a global community of health for all, and to advance reform of the World Trade Organization and the international financial and monetary system in a way that boosts global economic growth and protects the development rights, interests and opportunities of developing countries.

Adriano Lucatelli, co-founder and managing director of Descartes Finance, which is a leading Swiss digital wealth management company, told Xinhua that he expected China to continue to push for multilateralism to find global solutions for an after-pandemic world and wished China to take a leading role in fostering global cooperation.

More than 2,000 business, government and civil society leaders and over 20 heads of state or government are set to meet virtually for the WEF Davos Agenda to tackle the fallout from the Covid-19 pandemic and address the urgent need for global cooperation.

The Davos Agenda 2021 was scheduled to convene from Jan. 25 to 29 under the theme “A Crucial Year to Rebuild Trust.”

In his speech, Xi elaborated China’s pledge in five aspects to promote multilateralism and common prosperity, including taking an active part in international cooperation on the fight against Covid-19, implementing a win-win strategy of opening-up, promoting sustainable development, advancing science, technology and innovation, and promoting a new type of international relations.

Statistics showed that China’s GDP exceeded the 100-trillion-yuan (15.42 trillion US dollars) threshold in 2020 and is expected to be the only major economy to post growth in the pandemic-ravaged year.

“Zero-sum game or winner-takes-all is not the guiding philosophy of the Chinese people. As a staunch follower of an independent foreign policy of peace, China is working hard to pursue friendly and cooperative relations with other countries,” he said.

Xi said China will get more actively engaged in global economic governance and push for an economic globalization that is more open, inclusive, balanced and beneficial to all.

As people in the world now cope with the current crisis and endeavor to make a better day for everyone, Xi said the international community needs to “stand united and work together,” stressing that people should “let multilateralism light our way toward a community with a shared future for mankind.”

March 6, 2021
ISLAMABAD: Pakistan Muslim League-Nawaz (PML-N) leadership who was speaking to reporters outside the National Assembly ahead of the high-staked confidence vote for Prime Minister...