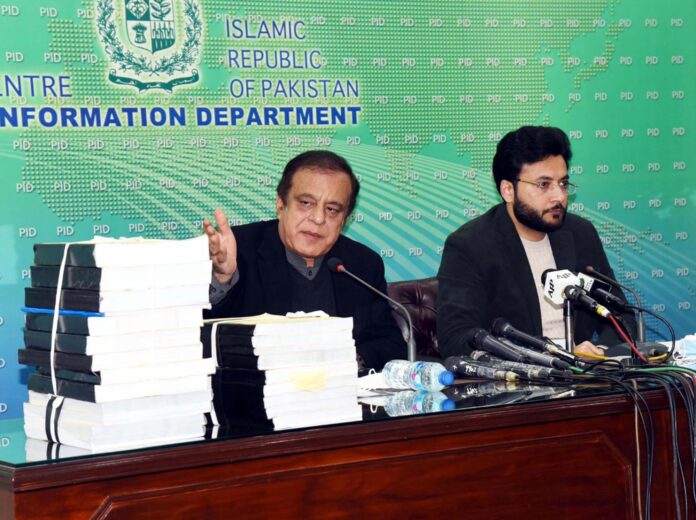 ISLAMABAD: Federal Minister for Information and Broadcasting Shibli Faraz on Sunday said that following the Supreme Court’s (SC) orders, the Pakistan Tehreek-e-Insaf (PTI) has provided all the details of the donations received by party workers and sympathisers during the 2018 election campaign.

Faraz was responding to allegations against the PTI in the foreign funding case and to the opposition parties’ demand that facts in the case be made public by the Election Commission of Pakistan (ECP).

He said that these entries total up to 40,000 in number, with names, addresses, telephone numbers, ID card numbers — all of them having been notarised and authenticated.

The minister spoke about Pakistan Democratic Movement (PDM), the 11-party Opposition alliance, which is has planned on staging a protest outside the ECP on January 19, and said that it is a “sorry attempt by them to attempt to repeat a pack of lies so much that it starts to seem like the truth”.

The minster said that all transactions came “through proper banking channels and were deposited into banking channels”. He said the details are available for reporters to see after the press conference.

Faraz noted that under the orders of the apex court, and as has been the practice, after the election symbol is given to a party, it is bound to provide accounts for the past five years.

“We have done [our due diligence] but now the matter has fallen to them [Opposition] to provide proof of their funding — PPP, PML-N and Maulana Fazlur Rehman — and the big expenditures they make with the help of vested interest groups.

“They do this so that when they come into power, they can facilitate these people in every illegal task […] such as sending money abroad or bringing money to Pakistan, or money laundering […] they never responded to the scrutiny committee about all this,” he said.

Faraz then read out a passage from a letter by the ECP in the case of Farrukh Habib versus Pakistan Muslim League-Nawaz (PML-N). “Though the committee has tried its level best to collect the relevant record, the respondent party was reluctant to submit the record asked for by the committee from time to time and the committee was constrained to adjourn the proceedings for provision of information as per the TORs (terms of reference).”

He explained that the ECP asked the PML-N to provide the ID card numbers and other information of people who had made donations to the party. “But these people are not handing over any information.”

“Their approach has always been that instead of answering the questions put to them, they say “he is also a thief’,” Faraz said.

The minister said that the opposition parties are all “playing a game of hypocrisy”, whether it is the PPP or the PML-N, or Maulana Fazlur Rehman — who believes that any state without him is incomplete. He said that the parties had historically always acted out of their own interest “whether it is the Securities and Exchange Commission, NAB [National Accountability Bureau] or FIA [Federal Investigation Agency]”.

“They never sought to serve the people. They proclaim they brought so many developmental projects but they took commission from these very projects,” said the minister, adding that the opposition parties have always viewed the law to be “different for them and different for the rest”.

“They have made an unsuccessful attempt to pressurise institutions,” he added. “So the drama they have staged, [it must be realised], this is not about PTI, it is about all of us. And we have provided an authenticated, notorised record of all the information from our end.

“Now it is their duty to come tomorrow, instead of the day after and tell the people whether it is really us who are thieves who have provided all proof,” the minister said. He said that after the outcome of the activity of the last two-three months, the opposition is “on its way out”. “They must submit their record to the scrutiny committee instead of hiding behind rallies,” said Faraz.