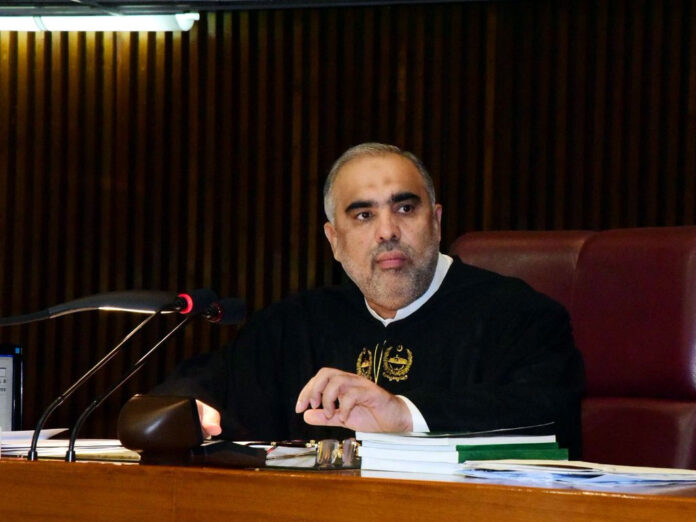 ISLAMABAD: National Assembly Speaker Asad Qaiser has reaffirmed Pakistan’s commitment to continue supporting the just struggle of Kashmiris for their right to self-determination.

The speaker and the Kashmir Committee member also discussed the formation of an All Parties Parliamentary Group to highlight the Kashmir dispute at the international level.

The speaker said that the brutality and barbarism that India has inflicted on occupied Kashmir is unprecedented, adding that the silence of international human rights organisations on state sponsored commission of grave human rights violations in Occupied Kashmir was incomprehensible.

He further said that India has tried to deprive the Kashmiri people of their basic rights by changing the demography of the illegally Occupied Kashmir. He urged the UN Security Council to take immediate notice of deprivation of basic human rights.

The speaker said that the present government has fully highlighted the issue of Kashmir at the parliamentary and diplomatic level. He said that Parliamentary Kashmir Committee, Standing Committees on Foreign Affairs and Human Rights have been asked to further highlight the issue of human right abuses in the occupied valley.

“The time is not far when the Kashmiri people will be blessed with freedom,” he remarked.

Asad Qaiser said Kashmir is an unfinished agenda of the partition of the sub-continent and its resolution is imperative for regional peace and stability.

He said that the move by the Indian government on August 5, 2019, has exposed India’s so-called democratic face.

“The Kashmir issue stands at the map of the world as an incomplete agenda of partition of India for the last seven decades. Peace in South Asia cannot be achieved till the resolution of the Kashmir issue,” he stated.