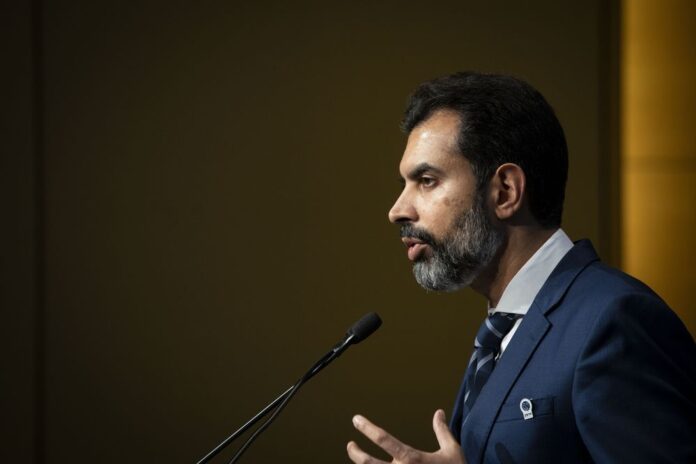 ISLAMABAD: State Bank of Pakistan (SBP) Governor Reza Baqir has said that Pakistan is in talks with the International Monetary Fund (IMF) to put the fiscal support programme back on track, adding that he was optimistic about the economic outlook despite the fallout from the coronavirus pandemic.

“We hope to have good news for the market and the world that we are putting the programme back on track,” the country’s central bank governor said in an interview at the Reuters Next conference on Monday.

With dwindling foreign exchange reserves and a struggling economy, Pakistan entered a three-year $6 billion IMF bailout programme in 2019 but is yet to have its second review approved, which has been pending since early last year.

Last year, staff from the IMF and Pakistani authorities reached an agreement to pave the way for a disbursement of $450 million in IMF funds pending approval from the global lender’s executive board, which is yet to take place.

Baqir said there was no disagreement on the end goal between the two sides, and that Pakistan needs to increase its low tax to GDP ratio.

Pakistan and the IMF have been working to implement IMF-supported economic reforms, in particular tax collection, aimed at stabilising the economy and shoring up a yawning fiscal deficit.

Though the bailout programme is still pending, Pakistan received $1.4 billion in emergency financing from the IMF to allow it to fund targeted and temporary spending increases aimed at containing the pandemic and mitigating its economic impact.

Authorities are counting on the IMF bailout package to bolster Pakistan’s fiscal position and increase global confidence in its economy.

Baqir also said he is more optimistic about the outlook even as Pakistan battles a second wave of the coronavirus outbreak.

“We are prepared for the challenges that may come about. We are already in the middle of a pandemic without any vaccine and once the vaccine comes, it will only make this better,” he said.

Baqir added that an economic recovery is underway and the bank’s job is to support the rebound until a vaccine is available.

“Pakistan is aiming to achieve 1.5pc to 2.5pc GDP growth in the current fiscal year,” he said.

“I think the next two or three years should bring some good news on the economic front.”

ISLAMABAD: Pakistan Muslim League-Nawaz (PML-N) leadership who was speaking to reporters outside the National Assembly ahead of the high-staked confidence vote for Prime Minister...
Read more
Top Headlines

ISLAMABAD: The opening meeting of the fourth session of the 13th National People's Congress (NPC) started at the Great Hall of the People in Beijing...
Read more
- Advertisment -

March 6, 2021
ISLAMABAD: Pakistan Muslim League-Nawaz (PML-N) leadership who was speaking to reporters outside the National Assembly ahead of the high-staked confidence vote for Prime Minister...