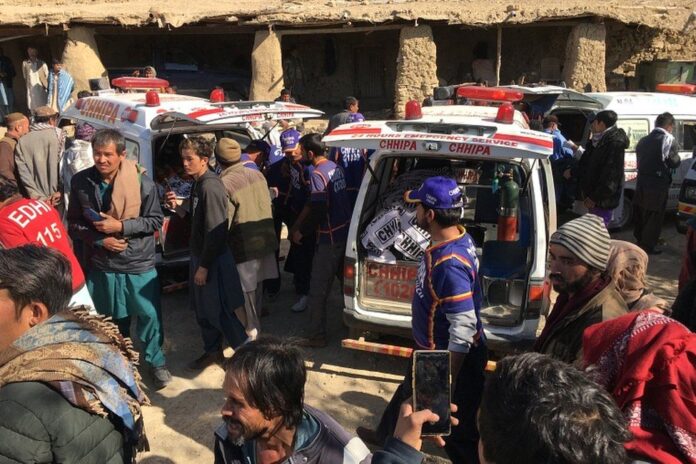 ISLAMABAD: The Afghanistan government has written a letter to the Ministry of Foreign Affairs (MoFA), seeking the custody of the dead bodies of three Afghan nationals who were among the 11 coal miners killed in Balochistan last week.

In a letter to the ministry’s Camp Office in Quetta dated January 5, the Consulate General of Afghanistan said: “As you know, in the terrorist incident that took place in Mach area of Bolan district of Balochistan province by the anti-governments and joint terrorists of the two countries, seven Afghan citizens are among the victims.”

“The heirs of three martyrs have requested that their dead bodies be transferred to Afghanistan,” the letter said, adding: “Therefore, your esteemed office is kindly requested to contact the relevant authorities to grant permission for transferring the mentioned three corpses via the Chaman-Spin Boldak Corridor.”

On Sunday, so-called Islamic State (IS) militants slit the throats of the miners in a residential compound near a mine site in Balochistan’s Bolan district, filming the entire incident and later posting it online.

Six of the miners were already dead when found, and five who were critically wounded died on the way to a hospital.

The following day, the Afghan Ministry of Foreign Affairs condemned the carnage, claiming seven of them were Afghan citizens.

“The Ministry of Foreign Affairs of the Islamic Republic of Afghanistan strongly condemns the brutal killing of ten coal miners in Mach village of Bolan district of Pakistan’s Balochistan province, seven of whom are Afghan citizens, and extends its condolences to the survivors and members,” Kabul said in a statement.

Thousands of Hazaras have since staged a protest, arranging the coffins across a highway in the provincial capital Quetta.

“We have become tired of picking up the bodies of our people,” Syed Agha Raza, a Shia Hazara political leader, told Reuters.

Prime Minister Imran Khan has condemned the attack as an “inhumane act of terrorism”. In a tweet, he said he has directed the law enforcing agencies to use all resources to bring the culprits to justice.

January 18, 2021
‘Jurisdiction’ generally can be understood as the “Power of a court to adjudicate cases and issue orders, or the territory within which a court...